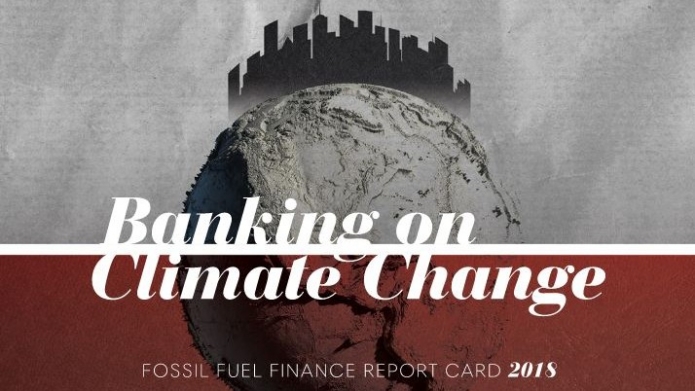 An environmental report released today found that Royal Bank of Scotland (RBS) has significantly reduced its lending to the worst fossil fuel projects, financing no coal, tar sands or arctic drilling projects during the past year.

The report “Banking on Climate Change” is in its 9th year and shows a general decline in RBS’ lending to extreme fossil fuels. In 2011 RBS was the 7th largest funder of coal mining in the world, providing the industry with almost £10 billion in finance: in 2017 no funding was provided (1).

The analysis does not consider RBS’ general lending to oil and gas and the report found that RBS’ investment screening policies were generally poor, showing there is still work to do.

Ric Lander, Divestment Campaigner for Friends of the Earth Scotland commented:
“RBS has historically used its power to open up new frontiers for the fossil fuel industry, contributing significantly to the destruction of our climate. So it’s all the more encouraging to see it part of a pattern of Scottish investors pulling out of coal, tar sands and arctic oil drilling. RBS should solidify this progress by changing their policy to prohibit lending to any fossil fuels firms and instead throw their financial weight behind climate solutions.

“For Scotland to be a leader on climate change we need our financial institutions to systemically end their support for dirty energy and invest in a just transition to a zero carbon economy. The Universities of Glasgow and Edinburgh have commited to divest from all fossil fuels and today’s news follows this positive trend.”

The report considered the policies and practices of 26 banks relating to the financing of some of the most carbon-intensive, financially risky and environmentally destructive fossil fuel sectors as well as negative impacts on human rights, Indigenous people’s rights and community health and well-being.

The global picture is of banks increasing their financing of extreme fossil fuel projects, with money for tar sands companies and pipelines more than doubling. Overall extreme fossil lending from big banks was $115 billion in 2017, an increase of 11% from 2016.

RBS’ withdrawal from extreme fossil fuels is most likely attributable to its general refocusing its UK and Ireland businesses, announced in 2016 (2). The Bank remains predominantly owned by the UK Government following its near-collapse in 2008.

Additional comments from the report authors:

“If we are to have any chance of halting catastrophic climate change, there must be an end of expansion and complete phaseout of these dangerous energy sources. Banks need to be accountable and implement policies guarding against extreme fossil fuel funding.”

“By financing these unwanted and damaging projects, banks themselves are complicit in human rights abuses. As such, continued bank investment in fossil fuel development should only be seen as promotions of crimes against humanity and Mother Earth, and nothing less.”