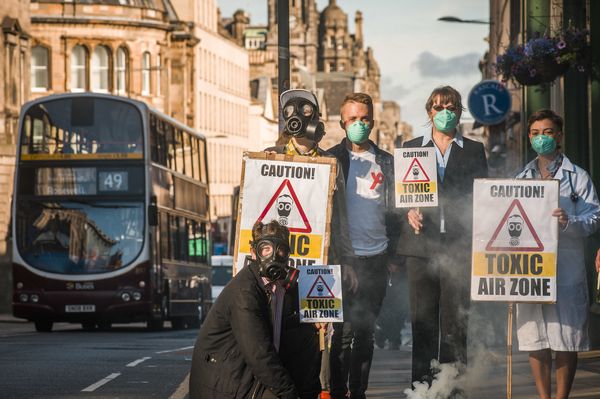 Environmental campaigners have criticised the new Low Emission Zone plans from City of Edinburgh Council. They highlighted that Low Emission Zone that covers the whole city fails to address pollution from cars, and cautioned that the inner small zone would serve only to displace air pollution. The plans have been revealed in papers published today ahead of a Council Committee meeting next week.

City of Edinburgh Council are recommending a two-tier Low Emission Zone to improve air quality in the capital.

“These plans from City of Edinburgh Council could have been a great step forward for air quality in the city, and the case for these improvements is clear. Toxic and illegal levels of air pollution in Edinburgh cause 200 early deaths each year. Several streets across the city are breaking legal limits that should have been met years ago.

“It is shocking that no restrictions will be applied to cars in the next 5 years, no matter how polluting these vehicles may be. Many residents in Edinburgh will be surprised that the Council is creating a zone to tackle air pollution but that it doesn’t actually apply to cars.

“These two-tier plans mean tourists and shoppers will be breathing clean air in the city centre but, further out, residential areas will experience higher traffic and air pollution, as vehicles drive round the zone. These half-hearted plans fail to tackle persistent pollution hotspots in the city. Everyone in Edinburgh has a right to breathe safe air now, yet these plans will only begin to clear the air in one part of the city. Why are some people in Edinburgh more worthy of protection from air pollution than others?

“An effective Low Emission Zone needs to cover a large area and restrict the most polluting vehicles, including cars. The long lead-in time for these plans means young children in Edinburgh will continue to grow up choking on dirty air that is harming their health and development.

“The Council has brought forward really good transport plans in recent months and is investing in walking and cycling but their choice to delay serious action on polluting vehicles fails to protect the health of our most vulnerable citizens.

“As part of our response to the climate emergency, we must take action to reduce the climate emissions from cars. By failing to apply restrictions on car use for the next 5 years, these plans miss a great opportunity to help Edinburgh play its part in tackling climate change.

“Edinburgh’s plans will improve air quality in the capital in the long-term, but we need more ambition now if we want to protect health and move the whole city forward.”

1. City of Edinburgh Council’s Transport & Environment Committee meets at 10am on Thursday 16th May. More information can be found at: http://www.edinburgh.gov.uk/meetings/committee/1005/transport_and_environment_committee

3. Free to use photos of Edinburgh air pollution protests and Scotland’s most polluted streets are available at https://flic.kr/s/aHskrG52pg

4. Earlier this year, Friends of the Earth Scotland identified 4 sites in Edinburgh with illegal pollution levels:

Dirtiest streets for Nitrogen Dioxide
The European Ambient Air Quality Directive set a limit for NO2 of 40 microgrammes per cubic metre, so all these sites are breaking the legal limit. The deadline for compliance was 1 January 2010.
Location / NO2 Annual mean (µg/m3)
Edinburgh Queensferry Road / 50.54
Edinburgh Nicolson Street / 49.22
Edinburgh St John’s Road / 46.32

Dirtiest streets for Particulate Matter
The Scottish annual statutory standard for particulate matter (PM10) is 18 micrograms per cubic metre, so two of these sites are breaking the standard. The deadline for this standard to have been met was 31st December 2010.
Location / PM10 Annual mean (µg/m3)
Edinburgh Queensferry Road / 24.15
Edinburgh Salamander St / 20.83
https://foe.scot/press-release/scotlands-most-polluted-streets-2018/

5. Edinburgh has 6 Local Air Quality Management Areas (AQMAs). An AQMA is required when a pollutant fails to meet air quality standards which are set by the Scottish Government. http://www.scottishairquality.scot/laqm/aqma?id=370

6. City of Edinburgh Council’s own report states that “4.17 There is a risk that a the city centre boundary alone may displace polluting vehicles to other areas of the city and exacerbate existing air quality problems.”

7. Friends of the Earth Scotland is
* Scotland’s leading environmental campaigning organisation
* An independent Scottish charity with a network of thousands of supporters and active local groups across Scotland
* Part of the largest grassroots environmental network in the world, uniting over 2 million supporters, 75 national member groups, and some 5,000 local activist groups.
www.foe.scot