Over 17,000 call for Scotland to lead on climate change

The Cabinet Secretary for Climate Change Roseanna Cunningham today (18/9/17) accepted 1500 postcards. They were presented by children from Sciennes Primary in Edinburgh. Pupils from the Eco-school had previously met with the Cabinet Secretary in June 2017 to discuss air pollution. Another 15,500 people have responded to the consultation online.

“Climate change is the greatest problem of our time. People want Scotland to be at the forefront of the global effort to overcome that challenge. The ferocious Atlantic hurricanes, deadly floods in South Asia and the ongoing drought in East Africa show that we have no time to waste. 17,000 people have backed the First Minister’s call that Scotland should live up to the commitments in the Paris Climate Agreement. At the same time a strong new Climate Act will create jobs, improve health, and reduce poverty.

“The Scottish Government’s announcement that it will phase out fossil fuelled cars shows it is listening to our campaign and the many people who want Scotland to lead on climate action. We now need to build on that ambition with a target of net-zero climate emissions by 2050 at the latest. That ambitious goal would provide certainty, respect what climate science tells us we need to do and help guide decisions and choices for the coming decades.

“The children who met the Cabinet Secretary today will be turning 40 when Scotland should reach its proposed zero emission target in 2050. The choices made now will shape the type of country they grow up and grow old in.

“We hope all Scotland’s political leaders hear our campaign and deliver a Climate Bill that commits to zero emissions and action for warmer homes, healthier transport options and a thriving, efficient agricultural sector.

“People across the country want the Scottish Government to take bold action on climate change. Scotland has shown strong leadership on climate change in the past, and it is clear today that thousands of people will be expecting that to continue, and watching closely to make sure it does. It is our own futures at stake, and we know that there can be no excuse for inaction or for doing the bare minimum.”

The consultation closes on Friday 22 September and the Government will analyse responses before introducing a Bill in 2018.

Tom Ballantine urged everyone to respond to the consultation by visiting www.act.foe.scot/sccs-climate He commented,
“We want as many people as possible to send a message to the Scottish Government – don’t delay, now is the time to act for our future.”

Free to use, print quality images of the handover are available here 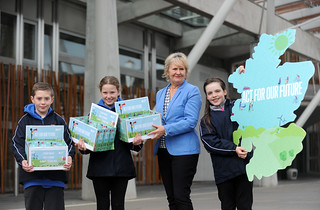 Ahead of Climate Week (18-22 September), the Scottish Government announced £600,000 for their Climate Justice Fund to support initiatives in Africa. Climate Change Secretary Roseanna Cunningham said: “Climate change is a huge injustice …and we know that countries like Scotland have a clear moral duty to make sure our lifestyles do not cause harm to the world’s poorest people. ”
https://news.gov.scot/news/climate-change-funding

In order for the new Climate Bill to match the ambition of the Paris Agreement, SCCS say it must:
• Set a target of zero greenhouse gas emissions by 2050 at the latest, and a reduction of 77% by 2030
• Ensure that future finance budgets are consistent with our climate targets
• Commit to actions that cut emissions and deliver a cleaner, healthier, more
prosperous Scotland by:
– Making all homes efficient and warm: Ensure that all homes have at least Energy Performance Rating ‘C’ by 2025.
– Cleaner transport: phase out the sale of new fossil fuel cars by 2030 to reduce emissions, clean up air pollution and improve the nation’s health.- Greener farming: Set a nitrogen budget for Scotland by 2020.

Sciennes Primary is a co-educational and non-denominational school on the south side of Edinburgh https://sciennesnewsflash.blogspot.co.uk

10,000 people have taken action through online platforms, including on the SCCS, Christian Aid, FoES, Oxfam and WWF Scotland websites and by signing postcards.

38 degrees is a campaign organisation of millions of ordinary people who live all across the UK. 38 degrees work together on the issues we all care about to bring about real change. www.38degrees.org.uk 38 degrees are supporters of the SCCS campaign but are not a member of SCCS.