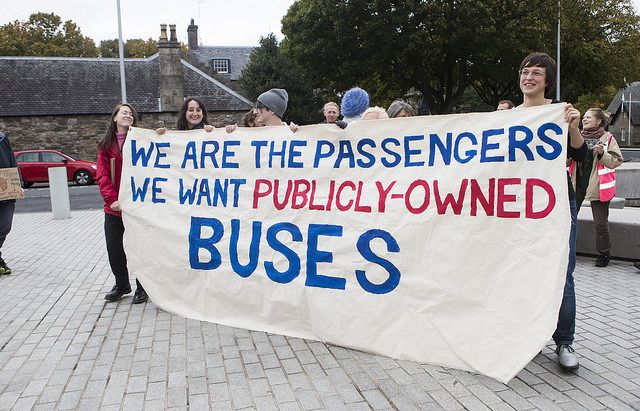 Philip Alston, former UN Human Rights rapporteur, has delivered an excoriating critique of the privatisation of bus services in Scotland and across the UK in a new report.

The report, which was launched on Wednesday (21st July 2021), concluded bus services were so damaged by privatisation that people were unable to access basic needs such as work, education and healthcare.

It described the deregulation of buses as ‘a masterclass in how not to run an essential public service’.

In responding to the report, the Scottish Government has revealed bus fares have risen by 58% above inflation, since privatisation. Philip Alston, Rebecca Riddell, and Bassam Khawaja, who wrote the report, recommend that governments within the UK embrace public ownership and control of the bus network to combat climate change.

Councils in Scotland have new powers for public ownership, recently devolved in the Transport Act, but other initiatives that have been brought in by the Scottish Government such as the Bus Partnership Fund act against this being put into practice.

Environmental campaigners say the report is proof we need a regulated bus network that is publicly owned and not run for profit.

“This report paints a devastating picture of how much privatisation has destroyed the UK’s bus network, while creating huge profits for big bus companies. Across Scotland, we have unreliable and expensive bus services which our elected officials have no say over. Private bus operators cut any routes that aren’t making a profit which has left many communities – both rural and urban – with no viable public transport.

“It is a scandal that bus fares have risen by two thirds above inflation since privatisation, while the cost of motoring has decreased.

“Transport is Scotland’s biggest source of climate emissions. We won’t meet any climate targets, set by councils or Scottish Government, without quality bus services run for passengers and not profit.”

“What has been the total change in the average bus fare since deregulation?

This chart shows the cost of motoring decreasing in cost, relative to average wages and the cost of living. https://www.racfoundation.org/data/cost-of-motoring-index

Philip Alston’s work on extreme poverty and human rights in the UK. 16 November 2018