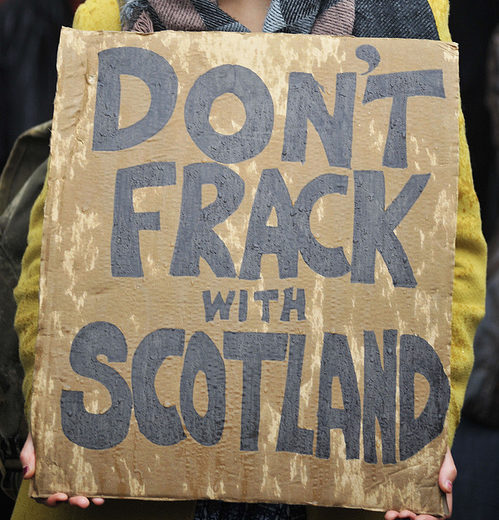 The Scottish Government has today (Thursday 3 October) announced a final position of ‘no support’ for fracking. Energy Minister Paul Wheelhouse confirmed in Parliament that the Government’s position will be upheld by policy levers rather than the legislative ban that frontline communities and campaigners have long called for.

The decision comes almost 5 years after the moratorium was first put in place and on the second anniversary of a statement to Parliament in October 2017 when Energy Minister Paul Wheelhouse announced an ‘effective ban’ on the industry. That position was subsequently exposed as having no legal force following a court case by petrochemical giant INEOS.

In response to an initial Government consultation in 2017, over 60,000 people said the industry should be stopped, while the Scottish Parliament voted for a ban on fracking in 2016. Today’s confirmation of no support for the industry would not have happened without massive grassroots movement against fracking.

“It is of course very welcome that Ministers have announced they are keeping the indefinite moratorium on fracking in place, but frustrating that today’s decision falls short of the full legal ban that would put the issue to bed once and for all.

“The inclusion of the policy of no support for fracking in the National Planning Framework would certainly strengthen the present position, but the Energy Minister acknowledged that he can’t confirm this will happen before the next Holyrood elections, which could see a new Government with a different approach to fracking in power. The Minister indicated that the door hadn’t been closed on legislating to prohibit fracking if evidence that further action was needed arose, and we urge the Parliamentary parties who are opposed to the industry to stay vigilant to the need and opportunity for this.

“Clearly the Government haven’t gone as far as they should have, but the fact that there has been no fracking in Scotland for the last five years is a huge victory for campaigners and communities across Scotland.

“The Scottish Government has announced a climate emergency, and a growing movement is demanding it starts acting like it means it. That includes taking a much tougher stance with big, polluting corporations, ending its support for new oil and gas and using the powers it has to pass strong laws in the Scottish Parliament to drive the transformative change we need.

“The community at Airth who have had a planning application for coalbed methane hanging over them since 2012 will be relieved to hear that the process to determine it can be moved forward, and clearly that application must now be swiftly rejected.

“We would like to thank the Greens and Labour, who have been instrumental in keeping the issue under the spotlight in Parliament and key to pushing the Scottish Government to take a strong stance on fracking”

1. Details of the Energy Minister’s Statement at: https://news.gov.scot/news/fracking-incompatible-with-climate-policy

2. Today’s statement comes at the end of a protracted process which saw the Scottish Government conduct several consultations on unconventional oil and gas. The latest of these was an ‘addendum’ to a full strategic environmental assessment consultation on its ‘preferred policy position of no support’ for the fracking industry. The addendum consultation, published in March this year, kicked a final decision on fracking into autumn.

3. Friends of the Earth Scotland is:
* Scotland’s leading environmental campaigning organisation
* An independent Scottish charity with a network of thousands of supporters and active local groups across Scotland
* Part of the largest grassroots environmental network in the world, uniting over 2 million supporters, 75 national member groups, and some 5,000 local activist groups.