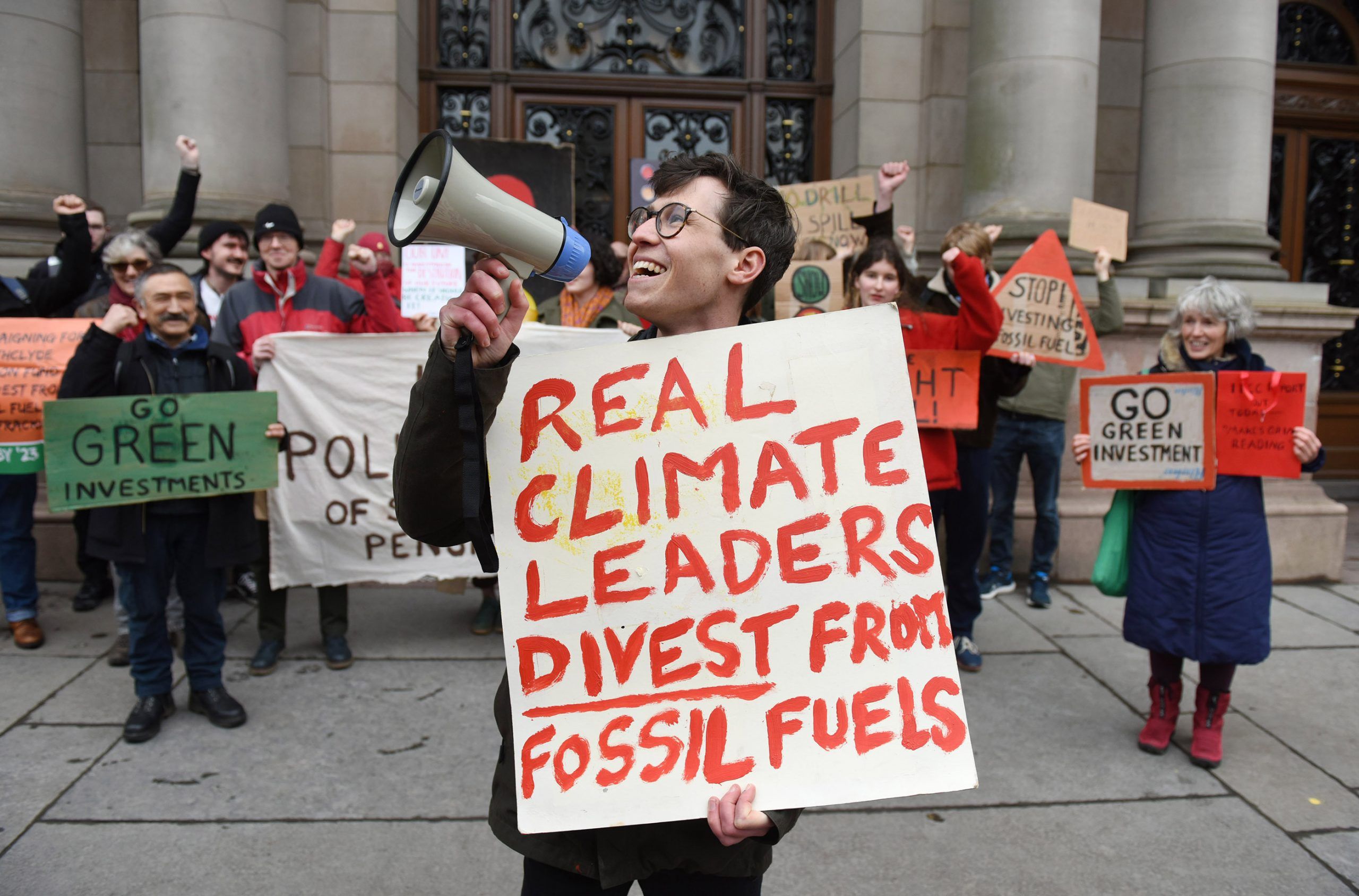 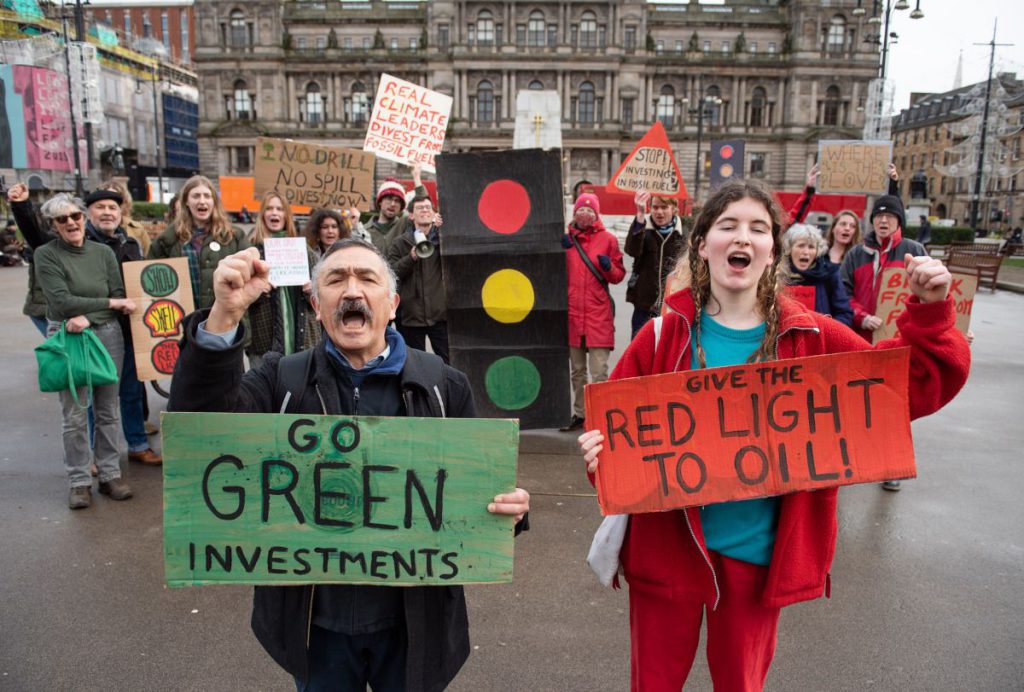 Strathclyde Pension Fund has published papers ahead of a committee meeting taking place tomorrow which suggest it is backtracking on its commitment to divest from fossil fuel companies.

Papers published ahead of the next committee meeting tomorrow show that the commitment to divestment has been removed, and replaced with a much weaker policy that means continued investment in fossil fuel companies. It has proposed a ‘traffic light’ system where companies would only have to meet minimal environment standards to be considered acceptable.

The news comes in the same week as the latest IPCC report which confirmed action to keep warming below 1.5C is vital to limit the severity of the impacts of climate change on human and natural systems. [2]

Local residents and people with pensions invested through the Strathclyde Pension Fund gathered in George Square yesterday (pictured) to express their disappointment at the lack of progress and demand that all fossil fuel extraction companies be ‘given the red light’. The protestors, from groups including Divest Strathclyde, Friends of the Earth Scotland, Extinction Rebellion Glasgow, Glasgow Calls Out Polluters and the Glasgow School of Art Climate Group, used a traffic light prop and road-sign themed placards to reference the traffic light system and the companies that the fund needs to stop investing in.

‘It is very disappointing that, since the COP26 spotlight on Glasgow has moved on, the people who run our pension fund feel able to backslide on the commitments to take seriously the need to divest from investments in fossil fuel. Having raised expectations that Strathclyde Pension Fund will be part of the solution to the problem of climate change, it appears that it will remain part of the problem. They don’t even think it appropriate to consult with the people who pay into the fund, the pension fund members. Councillors really need to step up and insist on the pension fund living up to the expectations of the fund members, including many thousands of UNISON members.’

Geraldine Clayton is a member of the Strathclyde Pension Fund and campaigner with Divest Strathclyde. She said:

‘After a whole year of obfustication since Glasgow City Council voted in favour of fossil fuel divestment, we need the Strathclyde Pension Fund committee to finally make that promise a reality. The IPCC report came out yesterday, and – though written in measured terms – it is a brutal read with the overriding message that the window of opportunity we have to stave off disaster is fast closing, and there must be no more excuses for inaction.

‘The last seven years were the hottest on record. We desperately need to stop fuelling the injustice of climate disaster and instead help to fund the solutions and create jobs in the green economy. Glasgow City council has recognised that we are in a “climate emergency”. As a pension fund member, l would like to ask the committee how many more warnings we need. The councillors on that committee need to act with the decisiveness an emergency requires.’

The Strathclyde Pension Fund is Scotland’s largest local authority pension scheme, currently holding estimated investments of £836 million in fossil fuel extraction companies. These include Shell and BP, two of the companies most responsible for climate change and whose practices were described by a recent study as ‘greenwashing’, given that their business plans actually involve increasing fossil fuel extraction [3].

The Strathclyde Pension Fund is managed by a committee of Glasgow City Council but operates across 11 local authorities, many of which have also passed votes in favour of fossil fuel divestment, including Renfrewshire, North Lanarkshire, and West Dunbartonshire.

View more photos for this story on our Flickr page.

[1] An assessment of the Strathclyde Pension Fund’s proposed policy alongside past announcements and detail of the Fund’s investments in fossil fuels has been published by Friends of the Earth Scotland:

[4] Divest Strathclyde is the campaign to get the Strathclyde Pension Fund to drop investments in fossil fuel companies and other big polluters, and re-invest the money in ethical and sustainable alternatives. https://www.gcop.scot/divest-strathclyde/