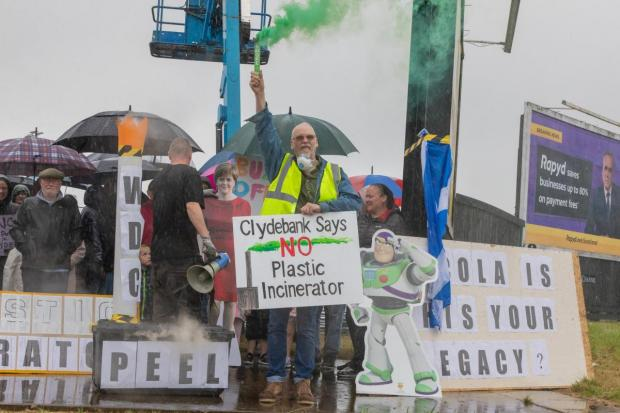 Victory for local campaigners fighting a new incinerator in Clydebank

Environmental campaigners have welcomed the news that plans for a new incinerator at Rothesay Dock in Clydebank have been cancelled. The Peel L&P plant would have burnt waste plastic to produce hydrogen, and has today (15 December) been withdrawn from the planning system.

The planned incinerator has been the first test of the Scottish Government’s moratorium on new incinerators which it committed to in June. West Dunbartonshire Council initially approved the plans for this plant in Clydebank. The decision was then referred to the Scottish Government, in line with this new national moratorium policy. However, today, the developer Peel L&P has withdrawn its planning application, ending plans for an incinerator on the site.

Kim Pratt, circular economy campaigner at Friends of the Earth Scotland said: “This is a huge victory for the Clydebank community who have come together to show a new incinerator is not welcome on their doorstep.

“The decision by Peel L&P to cancel their plans shows that they acknowledge the new incinerator won’t be accepted under the moratorium. The Scottish Government’s policy sends a strong signal to industry that the future of waste management in Scotland is changing. Developers should take note that Scotland will no longer tolerate their plans to burn precious resources.

“Plastics are fossil fuels, so burning them to produce hydrogen using risky and expensive technology cannot be part of a low carbon future. Putting an end to incineration is key to reducing the unsustainable consumption of resources which is wrecking the planet.”

Kenny Little, who led the local campaign against the Peel L&P incinerator said: “This is great news indeed! This proposal should have been thrown out from the very moment their application was ever suggested. Thank goodness for Friends of the Earth Scotland, UKWIN and ERCS for their guidance and support in helping our local community fight this case.”

The Scottish Government committed to rejecting planning permissions for new incinerators in Scotland in its response to the independent review on incineration.

The planning permission for the Peel L&P plastics to hydrogen Advanced Thermal Treatment facility (a type of incinerator) was accepted by West Dunbartonshire Council on 8 June 2022 and then referred to the Scottish Government under Planning Notification Direction for Energy from Waste (Incineration and Advanced Thermal Treatment facilities), first issued in November 2021.

The Scottish Government response to the independent Incineration Review:

FoES response to the incineration review: