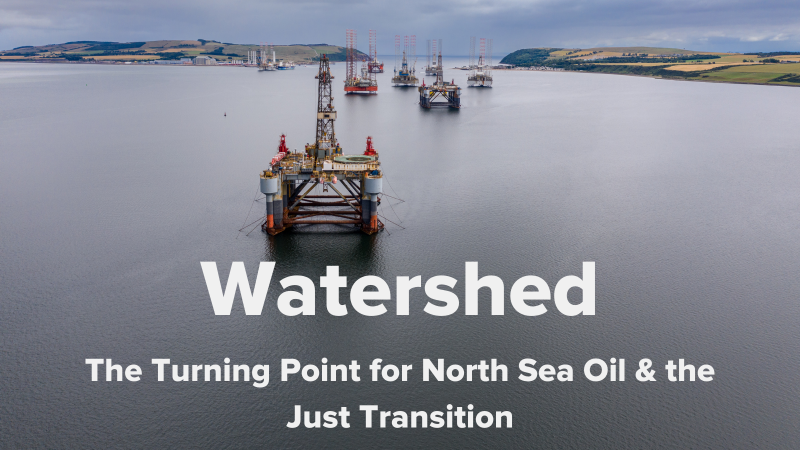 A new report out today (Wednesday 15 September) reveals that the UK’s developed oil and gas reserves have increased by 800 million barrels since declaring a climate emergency in 2019. This will create climate pollution equivalent to running Longannet, Scotland’s last coal power station, for over 35 years.

Coming just weeks before the crucial UN climate talks in Glasgow, the ‘Watershed’ report calls on UK and Scottish Governments to cease all new oil and gas field developments, to end financial support for the fossil fuel industry and redirect that investment and policy support to the just transition and building renewable energy.

The toxic combination of political and financial support for huge oil companies means there are now 6.5 billion barrels of oil in UK developed fields (those currently producing or in development) with another 13.5 billion in fields earmarked for future development.

It is currently UK and Scottish Government policy, written into law, to extract every last drop of this oil regardless of its devastating climate impact. Campaigners say ‘every extra barrel of oil moves us further away from the just transition’ that politicians say they want to deliver.

The report, published by Friends of the Earth Scotland and Oil Change International, makes clear that there can be no new oil and gas developments in UK waters if we are to uphold our commitment to the Paris climate agreement goal of limiting dangerous warming to 1.5ºC, and that there must be a rapid phase out of oil and gas production over the next decade, coupled with increasing renewables and ensuring a just transition for affected workers and communities.

This means the UK and Scottish Governments must reject all new developments, including the controversial Cambo oil field off Shetland which contains 800 million barrels of oil and gas.

“Oil and gas are the accelerants of the climate fire engulfing the world, yet both the UK and Scottish Governments are still committed to extracting every last drop of fossil fuels from the North Sea. Writing the rules for the benefit of fossil fuel companies and encouraging major polluters to keep on drilling for decades to come cannot possibly be reconciled with the action that is needed to cut climate pollution.”

“This toxic combination of political and financial support means the UK now has 6.5 billion barrels of oil and gas in fields that are already open and being drilled, which is more than enough to see us through the transition to clean renewable energy.

“Every time the UK opens a new oil field we get further away from a well-planned just transition. Oil and gas production must be phased out in a managed way over the next decade, with investment and support redirected to scaling up renewables across the country and ensuring a just transition so that every worker can retrain and move into a good green job.”

Previous research by FoES, OCI and Platform showed that with the right policy and investment, more than 3 jobs in clean energy could be created for every one oil and gas job.

The Scottish Parliament will today (15/9/21) hold a debate on the future of oil and gas and the need to phase it out to meet net zero targets.

Rance continued,
“Like Westminster, the Scottish Government’s policy – as set out in their Energy Strategy – is committed to maximising oil and gas production, including further exploring for more fields. With less than 50 days to the UN climate conference, we call on the Scottish Government to vigorously oppose all new oil and gas developments, in line with climate science, and support a managed phase out needed to ensure a just transition for Scotland’s oil and gas workers.”

“Staying below 1.5 degrees requires a rapid wind down of oil and gas production and it’s wealthy producers like the UK that have the means to move first and fastest. Ahead of COP26, the Scottish Government’s own climate credibility rests on demanding a sea change in UK policy away from extraction, including ending new oil and gas development and maximising investment in a just phase-out of production.”

The UN Secretary General Antonio Guterres said that the recent IPCC ‘code red’ report “must sound a death knell for coal and fossil fuels, before they destroy our planet… Countries should also end all new fossil fuel exploration and production, and shift fossil fuel subsidies into renewable energy.”

The United Nations Production Gap report states that governments around the world are planning to produce more than twice the amount of fossil fuels by 2030 than is compatible with 1.5ºC. The International Energy Agency recently warned that there can be no new coal, oil or gas developments opened if the world is to stay within the 1.5C temperature limit as agreed by nations.

The report comes two days after 2,185 scientists and academics call on governments around the world to end new fossil fuel expansion and phase out existing production through a Fossil Fuel Non-Proliferation Treaty.

The report Watershed: The Turning Point for North Sea Oil & the Just Transition is available at:
​​https://foe.scot/resource/watershed-north-sea-oil-just-transition/

Calculation of emissions.
The report states that reserves totalling 0.8 billion barrels of oil have been brought online in the last two years, combustion of which will release 361 Mt CO2. This is equivalent to over 30 year’s worth of emissions from Longannet – Scotland’s last coal fired power station – which emitted 9.5 Mt CO2 per annum.

Free to use photos from Stop Cambo protest and occupation of UK Government offices in Edinburgh in Summer 2021 https://www.flickr.com/photos/friendsoftheearthscotland/albums/72157719571487464

Oil Change International is a research, communications and advocacy organization focused on exposing the true costs of fossil fuels and facilitating the coming transition towards clean energy.
http://www.priceofoil.org