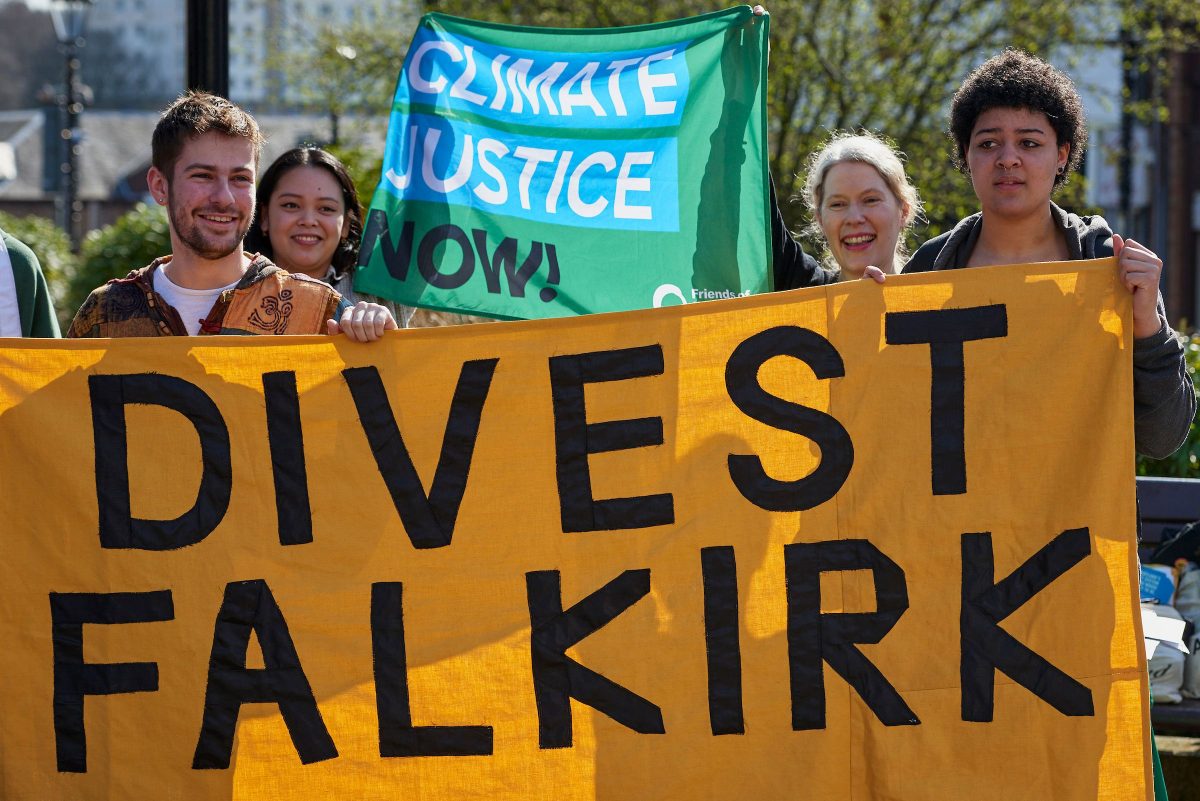 Environmental campaigners have today (30/3/22) revealed that the Falkirk Pension Fund has an estimated £131 million invested in coal, oil and gas companies which are driving climate breakdown, following a Climate Strike on Friday (25/3/22) that called for divestment from fossil fuels.

Climate activists from campaign groups Friends of the Earth Falkirk and Fridays for Future Scotland staged a demonstration in Falkirk High Street in solidarity with the Global Climate Strike and to demand that the Falkirk Pension Fund removes this money from fossil fuel companies.

The Falkirk Pension Fund is worth a total of £2.8 billion and is run by Falkirk Council. It administers the pension funds of over 30,000 members from Falkirk, Stirling and Clackmannanshire Councils. The pension fund also manages the pensions of around 30 employers, including the Scottish Environment Protection Agency (SEPA) and Scottish Autism. [2]

The most recently available data from March 2021 show that Falkirk Pension Fund invests in several of the largest global fossil fuel producers, including BP, Shell and Anglo American, as well as in mining giant BHP, despite the council declaring a climate emergency in 2019. [3]

“The massive amount of money in this pension scheme is an essential tool to support those going into retirement, however, who we decide to invest this money with can have a massive impact.
Divesting this money from the polluting and destructive fossil fuel industry and instead deciding to invest in green and renewable energy providers will ensure that we have a safer and healthier world to retire into.”

UK-based BP is one of the world’s biggest fossil fuel producers. The company was fined $18.7 billion, the largest environmental fine in US history, for the ‘gross negligence’ regarding the 2010 Deepwater Horizon spill which devastated the Gulf of Mexico [4] and BP’s current and former Chief Executives have sat on the Board of the Russian oil company Rosneft. [5]

Shell was also recently said to be reconsidering whether to press ahead with the controversial Cambo oil field situated off the coast of Shetland. This is despite major opposition from environmental campaigners and the First Minister’s objections due to the climate impacts of further North Sea oil and gas production.

Shell has been associated with a number of environmental and human rights violations worldwide, including threatening to drill in the fragile environment of the Arctic [6] and conducting shale gas fracking, a highly polluting form of drilling which is effectively banned in Scotland. [7]

The research estimates that the value of the pension fund’s investments in coal, oil and gas companies has increased from £92 million in March 2020 to the current total of £131 million. [8]

“Young people and communities around the world who have done the least to create the climate crisis are already suffering the most. We’re striking in Scotland and in countries across the world to call for climate justice and to stand in solidarity with people whose power has been stolen by fossil fuel companies and other big polluters.

It’s time for Falkirk Council and other councils in Scotland to take action to protect our future and stop investing in planet-wrecking fossil fuels.”

Richard Dyer from Friends of the Earth Falkirk said:

“The message of the youth climate strikers was clear – we must stop putting the profits of oil and gas companies over their future and the future of the planet. In solidarity with their call, we’re asking the Falkirk Pension Fund to wake up to the climate emergency and divest their £131 million from the high-carbon economy. This could provide valuable finance through reinvesting in renewables and green jobs.

With Ineos, one of Scotland’s most polluting fossil fuel companies, just down the road in Grangemouth, Falkirk Pension Fund could also support the Just Transition of workers from polluting industries and promote a healthier environment for all.”

On average, oil and gas companies dedicate only 1-4% of their spending to clean energy projects [9].

Divestment campaigners argue that funding these companies is morally wrong and fatally undermines progress in tackling the climate crisis.

To date, over 1,500 institutions around the world have committed to divest $40.43 trillion from fossil fuels [10], including the Welsh Parliament, the London Boroughs of Islington and Lambeth [11], 93 UK universities [12] and Cardiff Council [13].

[1] A spreadsheet detailing the complete analysis of Falkirk Pension Fund’s investments by Friends of the Earth Scotland can be found at:
https://docs.google.com/spreadsheets/d/1PF_zZAeiOrP9_NIkul-xXiGkVeeGYr2E/edit?usp=sharing&ouid=115941089293459260348&rtpof=true&sd=true

[3] A spreadsheet detailing the complete analysis of Falkirk Pension Fund’s investments by Friends of the Earth Scotland can be found at:
https://docs.google.com/spreadsheets/d/1PF_zZAeiOrP9_NIkul-xXiGkVeeGYr2E/edit?usp=sharing&ouid=115941089293459260348&rtpof=true&sd=true

[4] BP has paid over $60 billion in criminal and civil penalties and clean up costs for the Deepwater Horizon oil spill:
https://www.theguardian.com/environment/2015/jul/02/bp-will-pay-largest-environmental-fine-in-us-history-for-gulf-oil-spill
https://theconversation.com/bp-paid-a-steep-price-for-the-gulf-oil-spill-but-for-the-us-a-decade-later-its-business-as-usual-136905

[6] Shell’s proposal to drill for oil in Arctic Alaska. Initial exploration drilling is scheduled for the winter of 2023-2024 : https://www.akbizmag.com/industry/oil-gas/extra-year-for-shells-arctic-offshore-plan/

[7] Shell announced last year that it is selling its US shale assets in Texas to ConocoPhilips: https://fortune.com/2021/09/21/shell-shale-assets-conocophillips-billion-us-european-oil-majors/ Earlier this month, Shell resubmitted plans for approval of a large North Sea gasfield: https://www.ft.com/content/3664e3e8-d48e-4dba-b674-f0f469dba227

[8] A spreadsheet detailing the complete analysis of Falkirk Pension Fund’s investments by Friends of the Earth Scotland can be found at:
https://docs.google.com/spreadsheets/d/1PF_zZAeiOrP9_NIkul-xXiGkVeeGYr2E/edit?usp=sharing&ouid=115941089293459260348&rtpof=true&sd=true

[9] The World Energy Investment 2021 Report by the International Energy Agency revealed that on average, oil and gas companies allocated around 1% of their total 2020 capital expenditure to clean energy projects, and this figure was predicted to rise to over 4 per cent by the end of 2021.
https://www.iea.org/reports/world-energy-investment-2021/executive-summary

[10] To date, 1508 institutions have committed to divest $40.43 trillion: https://divestmentdatabase.org

[13] Friends of the Earth Falkirk is a group of climate justice activists from the Falkirk area who campaign on a range of climate issues, including divestment of the Falkirk pension fund and ending pollution:
http://foefalkirk.blogspot.com

[14] Fridays for Future Scotland is a group of passionate, determined, young people demanding climate justice from the Scottish government. Friday for Future Scotland organise school strikes and protests in cities all over Scotland.
https://fffscot.org