What a beautiful day for an AGM! Just back from RBS HQ at Gogarburn where the bailed out bank was holding its annual general

meeting. Friends of the Earth Scotland were joined by activists from a coalition of environment and development groups, as well as representatives of the Canadian First Nations communities who are directly suffering from the effects of the tar sands industry. 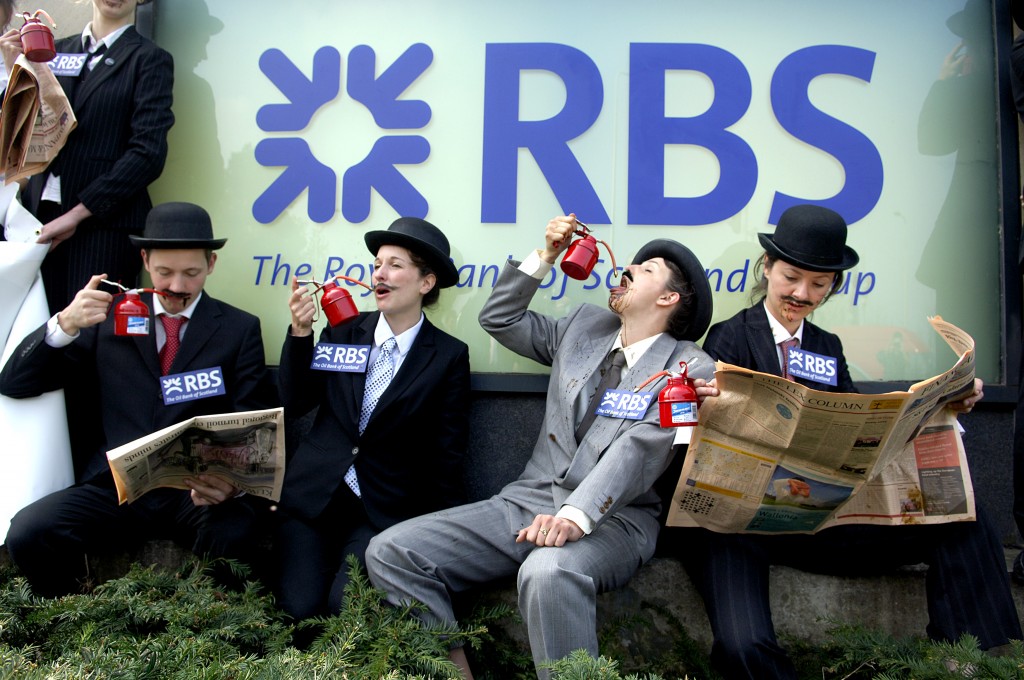 While we frolicked around outside the vast HQ complex dressed as bankers addicted to oil (drinking watered down molasses from cans – disgusting by the way) to symbolise the problem banks like RBS have in weaning themselves off financing the fossil fuel industry, inside the RBS board faced the anger and emotion of our Canadian friends who attended the meeting officially as proxy shareholders.

It’s no wonder they are angry. New figures show that RBS has raised £5.6 bn for companies operating in the Canadian tar sands – described as the most destructive industrial project on earth – since it was bailed out by taxpayers money in 2008.

That’s £5.6 bn into an industry that has already desecrated an area the size of England, stripping ancient boreal forest and the underlying peatland and pumping vast quantities of water and toxins into the ground to squeeze crude oil out of the bitumen below. An industry that leaves behind toxic tailing ponds so big they can be seen from space, that leach into the local eco-systems poisoning the wildlife that indigenous communities depend on for their livelihoods.

That’s also £5.6 bn that could have gone towards projects that the proposed Green Investment Bank (budget a mere £3bn) will support: projects that will create the transition to a vitally needed low carbon economy. Or indeed to the small Scottish businesses fighting to stay afloat during the recession. Its not just the Canadians who are angry with RBS – an Inverness businessman who accused RBS of stripping his business naked took an appropriately literal protest to the bank’s doorstep today.

It’s our money that’s going towards these brutal projects, but we don’t have a say in how its spent. UKFI, the arms length body that manages the bailed out banks on the government’s behalf, just waved through all the business as usual RBS shareholder resolutions, including one for a £7million pay packet for chief exec Stephen Hester!

That’s why we asked Clayton, Jasmine and Melina to hand in the photo petition we have been collecting over the past month to the RBS board, and the motions we voted on at last nights ‘People’s AGM’.

The good news is that as a result of all this activity, a shareholder at the AGM asked the Chair of the Board, Sir Philip Hampton, whether he would meet face to face the First Nations Activists. How could he refuse? And that’s what they are doing right now – watch this space, we’ll let you know how it goes!

20th April: quick update – just heard from Liz Murray of WDM Scotland who went with Jasmine Thomas, Melina Laboucan-Massimo and Clayton Thomas-Muller to meet RBS sustainability staff and a board rep after the AGM (nb. not Philip Hampton, as reported yesterday). 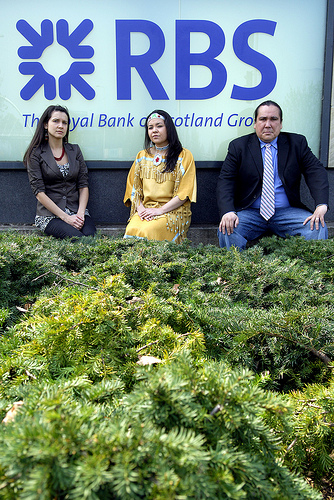 Apparently, since last year the bank has developed a stronger policy on these issues, and they assured us that they are keen to learn more about why extracting oil from tar sands is a bad idea.

This is of course, good news, but the bank must pick up the pace and start treating the issues we are highlighting more seriously. With human rights (and lives) and the environment are at stake, there is no time for dawdling.

Sounds to me like a bank that badly needs a firm steer from the government to clean up its investment portfolio since they are apparently unable to do it themselves.

Take our e-action to business secretary Vince Cable now, to demand that he ensures the activities of the bailed out banks don’t undermine the objectives of the Green Investment Bank.