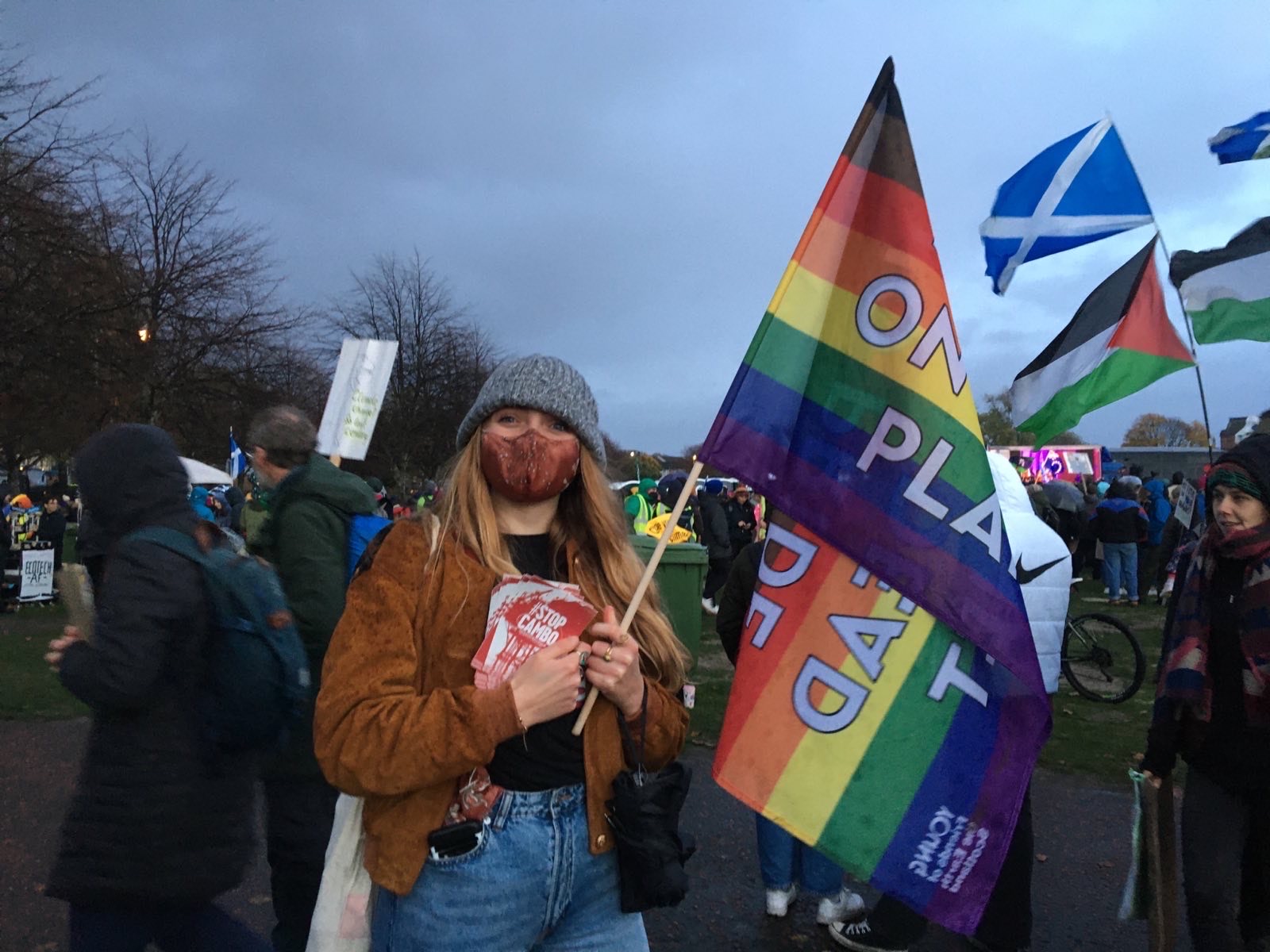 Reflections on COP26: a story of two extremes

Home > Reflections on COP26: a story of two extremes
16th December 2021 By Admin

Attending COP26 as a Scottish young person was a story of two extremes. Billed as the ‘least accessible COP ever’, this prediction proved true.

The inaccessible and disempowering nature of the Blue Zone (the official UN negotiation space) has been highlighted extensively by activists who felt systematically excluded from negotiations, despite having observer status within that area. Yet the civil society spaces and mobilising taking place in the wider city felt so important, and were a chance for the groups and communities excluded from formal negotiations to make their voices heard.

Inside and outside of COP26

I attended the Blue Zone as an observer in the first week of COP26, as well as continuing to take part in activism in the wider city, and during the second week I threw myself into organising with the Stop Cambo campaign and Young Friends of the Earth Scotland. I experienced two very different COPs.

In week one, I felt incredibly privileged to attend the Blue Zone when so many were excluded, but I also felt the frustration of being unable to actually attend any negotiations or make my voice heard.

Taking action within the Blue Zone is incredibly limited; there are only a few designated ‘action spaces’ and the only one with any foot traffic had a 20 person limit. Activists are also prevented from calling out any companies (like Shell or BP) or nation states directly, and doing so can risk losing observer status for an entire delegation.

Despite these restrictions, activists still managed to pull off several impactful actions, including a ‘no more false solutions’ rally and challenging Alok Sharma over his hypocrisy on the Cambo Oilfield.

In direct comparison, the activism and organising I took part in outside of the Blue Zone was an incredibly empowering experience. I learnt more about myself and the climate justice movement in those two weeks than I have in several years working in climate spaces.

Actions highlighted the true causes of the climate crisis, conversations centered around radical systemic solutions, marginalised voices often led the way, and I met and learnt from incredible climate activists and organisers from around the world. Spaces like the COP Coalition‘s Peoples Summit and the COP26 Youth Hub (organised by Young FoES and other youth climate groups) helped provide containers for all of this.

Who participates and who is heard?

Participatory justice is a key pillar of climate and environmental justice. Without meaningful participation in decision making processes of those most impacted by the climate crisis, outcomes will continue to fall short when measured against climate justice.

COP26 has been a disappointment on a number of fronts, but the thing that has stuck with me is this failure: a conference which gives the fossil fuel industry more seats at the table than any country is so distant from any kind of participatory justice it’s difficult to comprehend.

This distinction between the ‘inside’ and ‘outside’ of COP is obviously not a perfect one. There were some positive outcomes and processes as part of the Blue Zone, and there were also several problems, including with accessibility, highlighted with the organising that took place ‘outside’ throughout Glasgow. However, one of the main things I’m taking from my time in Glasgow is the importance of making our own spaces, where we can have the kind of conversations that are unfortunately still impossible within formal negotiations.

For the Scottish climate justice movement, COP26 was an opportunity to engage with and learn from activists from around the world. Let’s take some of those learnings into our movement as we go forward.

Young Friends of the Earth Scotland is a grassroots network of young activists aged 16-30 from across Scotland organising collectively from climate and social justice.