This week I’ve been forced to look back at the Copenhagen climate summit to prepare for an activist briefing session, and for a roundtable panel at the Political Studies Conference being hosted this week by Edinburgh University.

With the benefits of both hindsight and distance it’s been possible to see both the positives and negatives of the summit in better proportion.

It’s been very interesting to see quite how wide the gap is in different interpretations of the outcomes of the summit – and nowhere wider than in views on the Copenhagen Accord. In the US this is widely seen as the ‘saving grace’ of the summit, a result salvaged from disaster at the last minute. And there is one aspect in which that could be so. The fact that both the USA and China have joined in an agreement, however weak, offers a ray of hope.

The Accord has triggered the UN to convene a process to mobilise finance to assist developing nations mitigate and adapt to climate change. There is some hope that this group will deliver a step change in finance. Despite it being co-chaired by an African premier, alongside Gordon Brown, it will probably do so almost entirely on terms set by the rich donor nations. The other co-chair, Meles Zenawi of Ethiopia, does not have a good track record, as the first African at Copenhagen to abandon the principles of climate justice in favour of access to finance, apparently in response to European arm-twisting. In the UK we have already seen the willingness of a developed nation to simply redefine existing development aid to deliver its promises under the Accord – taking away with the left hand what it gives with the right.

On the negative side, if the Accord leads

to new negotiating processes and approaches it risks breaching an even more fundamental principle of the Convention: that to deliver a fair approach requires a top-down allocation of scientifically guided targets for emissions reduction. The Accord is instead a bottom-up ‘pledge and review’ mechanism. And the current measures promised, even including those from developing countries, don’t add up to climate safety. Rather they would lead to temperature rises in the order of 4 degrees C.

Fortunately many of the countries associating themselves with the Accord have done so while emphasising the primacy of the established negotiating tracks under the working groups on the Kyoto Protocol and Long-term Cooperative Action. 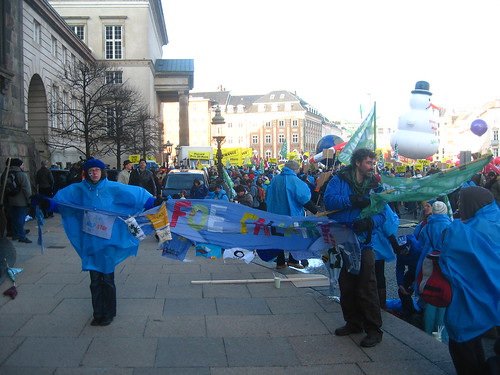 These negotiations made progress at Copenhagen, albeit distracted and delayed by all the back-room manipulation first by the Danish hosts, and then led by the USA. And both tracks obtained a renewed mandate to continue negotiating. In both tracks there are very strong proposals on the table, but also weak ones. In many respects the gaps remain huge, and the majority of the texts remain unresolved, with most progress being made on provisions relating to measures to prevent deforestation, which could be welcome if not ultimately linked to carbon trading. Negotiators agreed on some basic safeguards, including recognition of the risks to indigenous peoples and local communities.

While the Accord set out a marker for the alternative approach the rich countries were prepared to agree, an alternative rooted in climate justice may well emerge from the Cochabamba summit convened by Bolivia, and due to be attended by almost 100 nations later this month. That will be a great opportunity for critiques of carbon trading to come to the fore. Many of the 80 or so nations that have not signed the accord, primarily countries with low emissions and high vulnerability to climate impacts, will be there, as well as several of those that have. Perhaps we will see a plausible alternative model take root. But even if not, this summit should strengthen the chances of a decent and fair agreement within the continuing Climate Convention negotiations.