On 14 September 2014 Friends of the Earth Scotland and our partners held an ambitious conference at the Adam Smith Business School in Glasgow called ‘Re-Inventing Our Economy For People and the Planet: An Enquiry About Alternative Sustainable Economic Policy’.

This blog brings together who came, what they said, and collects useful resources and multimedia explaining the ideas and proposals that were brought to light.

Download the conference pack here, including the programme, list of speakers, and abstracts from breakout session leaders.

The big question: How can we make our economy deliver wellbeing and sustainability?

At the conference we set down a challenge and an ambition.

We believe we can steer our economy in a direction which ensures wellbeing for all and care for the environment on which we depend.

A partnership of civic organisations in Scotland – environmental organisations, anti-poverty campaigners, trade unions and international development charities – is posing the key questions about economic policies which can make real change.

On the eve of the conference Jubilee Scotland hosted a debate in conjunction with the conference organisers on the topic: “Wellbeing, work, equality and environment: which direction for a sustainable economy?”

The speakers were Ann Pettifor, Richard Murphy, Richard Werner, John McLaren, and it was chaired by Agnes Tolmie. Listen to the debate in full below.

Listen to “Reinvent Our Economy: Debate” on Spreaker.

You can watch all 15 plenary talks on the Conference Youtube Channel.

Anatole Kaletsky: four stages of dominant economic thinking
Tim Jenkins: how we create an economy delivering wellbeing of all within environmental limits

We have handed control of the economy to a very small number of people. How do we create an economy which works for the wellbeing of all within environmental limits? We need to capitalise on the work already done on the financial sector to discredit the dominant economic narrative; and to reframe the debate with a new narrative that tackles finance, inequality and the environment, so we can then take back control.

Ann Pettifor: the capture of money supply by the financial elite; and what we can do about it

Control of the monetary supply has been captured by the financial elite through credit creation by banks. There’s a correlation of money, consumption and emissions. We’ll need a lot of money to transform our economy, so we need to understand. How can the monetary architecture be changed to create a low carbon sustainable economy?

Molly Scott-Cato: the crisis has been used against us – change how we think about the economy

We should use the crisis to shift the way people think about the economy, which cannot keep growing within physical limits of the planet and anyway hasn’t made us happier. Why are the poorest suffering through austerity and why have conditions of employment been attacked in order to provide public money to the bankers? Devotion to the financial markets prevented us from making the investments in the green economy that would benefit us all.

David Bell: on the drivers of increasing inequality

The drivers of increasing economic inequalities such as changing household composition, rent seeking, decline of trade unions, technical change and those at the top taking an ever larger slice of the pie. The difference in life expectancy and other social ills which are associated with income inequality. Tackling income inequality is crucial in tackling health inequality. We should also look at pension fund management and high intensity trading.

Alternative economics theories have yet to coalesce around a dominant consensus in the way that proponents of neoliberalism have achieved. Where is the common ground and what are the key components and tensions within alternative economics? A look at full employment, de-growth, relocalising the economy, sustainable livelihoods, a living wage and low carbon society.

Malcolm Sawyer: financialisation and the need to restructure and regulate the financial sector

The financial sector is an unstable system which is harmful to the real economy. Financialisation of has contributed to deregulation and privatisation, rising inequality, continuing investment in fossil fuels and slower growth. Casino capitalism, high frequency trading, demutualisation, deregulation all have an effect. Ideas about how we should restructure and regulate the financial sector so that it serves the real economy rather than its own short term interests.

Where does money come from? 97% is created by banks from nothing and they decide for what purpose it is be used. How does this process work, what are the rules that govern it and what are the flaws in the theory that inform it? The creation of money needs to be controlled to reduce harm and encourage productive and environmentally sustainable development. Creating a system which doesn’t do harm including a network of local banks, kick started by local authorities.

Richard Murphy: tax is a pillar of democracy and at the heart of the reorganisation of our economy

Tax is at the heart of the change in society that we want to see and a key pillar of democracy. They say tax will drive out the wealth creators, but it is the ordinary people who create wealth using the infrastructure created by tax. There is a need to reorganise our economy, redistribute, re-price upwards bad things like carbon and re-price downwards good things. This means we need to collect more of £100bn tax dodged each year.

How do we reinvent public ownership for the 21st century? Why should private ownership and market relations be sacrosanct? Privatisation led to concentration of ownership, mainly by foreign investors. The result is an energy sector that has faile on price, energy security and decarbonisation. The Eruopean trend to re-municpalisation and the community ownership structures in Germany and Denmark give examples of how energy can be run for the common good.

Sheila Dow: for diversity within economics

There are diverse schools of economics; here are some of the reasons why we should not rely on the mainstream neo-classical economics which prevails in most universities; and some suggestions about how the situation might be changed within Scotland

on some of the policy opportunities available in Scotland

describing Oxfam’s doughnut diagram of the environmental limits within which Scottish society needs to live and our social foundations – a range of domains that ensures everyone has the resources they need to live a good life – the evidence is that we are falling short.

Listen to “Reinvent Our Economy: Banking workshop” on Spreaker.

Listen to “Reinvent Our Economy: Infrastructure wks” on Spreaker.

Listen to “Reinvent Our Economy: Money workshop” on Spreaker.

Listen to “Reinvent Our Economy: Pensions workshop” on Spreaker.

Summary and reflection by Matthew Crighton, Friends of the Earth Scotland

This conference, organised by a new partnership of environmental and social justice organisations, trade unions and academics, examined how to steer our economy in a direction which would ensure wellbeing for all and care for the environment.

Explaining the purpose of the event, Matthew Crighton of Friends of the Earth Scotland opened the event pointing to the problems with our current economic systemed to including the banking crisis, poverty and inequality and above all the need to stop reduce greenhouse gas emissions and avoid further breaching of environmental limitsdestruction.

The New Economic Foundation’s Tim Jenkins explored what is wrong with our current macro-economic thinking. He believes that power was outsourced from the state to the big corporations through privatisation and that we need to reframe the debate by creating a new narrative that tackles finance, inequality and the environment, and then take back control.

Ann Pettifor pointed to the correlation of money, overconsumption and rising emissions and talked about how we can actually use the monetary system to achieve society’s desired goals.  She stated that as we’ll need a lot of money to transform our economy, so we need to understand the monetary architecture of our economy.

Professor Malcolm Sawyer focused on the huge growth of the financial sector within the overall economy. This growth was accompanied by deregulation and privatisation which helped lead to the financial crisis. He also examined how this financialisation has contributed to rising inequality, continuing investment in fossil fuels and slower growth.

Green MEP and economics Professor Molly Scott-Cato suggested we should use the crisis to shift the way people think about the economy, which cannot keep growing within physical limits of the planet and anyway hasn’t made us any happier. The outsourcing our manufacturing carbon emissions to China won’t solve our problems.

The argument about ‘no growth’ was examined – that we should invest in jobs not carbon or speculation. Others argued that this is a difficult political sell, so we should be careful about getting hung up on growth. It is critical to focus on ownership and tax system, including land and use of pension funds.

Malcolm Sawyer focused on financialisation of the economy. A feature of this is deregulation and privatisation – a consequence of which is financial crisis. Equally important is how financialisation has contributed to rising inequality, continuing investment in fossil fuels and slower growth.

Richard Murphy talked about the need to control the economy and how that requires a new approach to tax. There is a need to reorganise our economy, redistribute, increase the price of ‘bad things’ like carbon and reduce the price of ‘good things’. He also believes that we need to collect more of £100bn tax which is dodged each year.

Professor Andy Cumbers spoke about reclaiming public ownership, specifically in the energy sector. He identified how privatisation has led to concentration of ownership, mainly in foreign investors and how the energy sector has failed on price, energy security and decarbonisation. Across Europe and the world there is a move to the local authorities taking back ownership of utilities with Germany now having 44 new local energy companies and the Danish wind power revolution creating many new hybrid models of ownership.

The final session, with a panel of speakers from the partners who organised the conference, looked at what needs to change and how we might go about it. They identified the fundamental role of finance, pensions and taxation in the economy. Tackling inequality as a moral and economic necessity, together with higher wages and incomes, including stronger collective bargaining mechanisms. The role of government and economic development needs to be rediscovered, including new forms of public ownership. All this economic development has to be sustainable because the planet’s resources are finite.

Photographs of the event by Ric Lander can be found here. 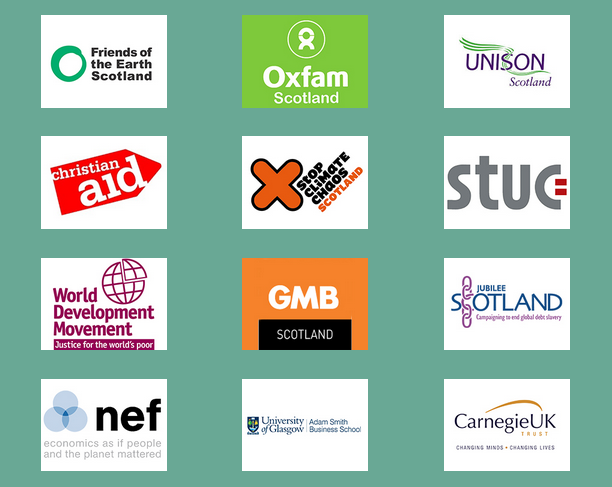 Funded by the Institute for New Economic Thinking, Friends of the Earth Scotland, the Adam Smith Business School and Carnegie UK Trust.