By Ana Dragalina, Friends of the Earth Scotland volunteer.

Last Saturday we paid a visit to the people of Rosyth, Fife, and had a chat with them about one of Forth Energy’s proposed biomass powered plants which is planned to be built near the town’s port. Sheila Duffy, concerned resident of Rosyth and Friends of the Earth Scotland activist, invited us along to help her raise awareness. 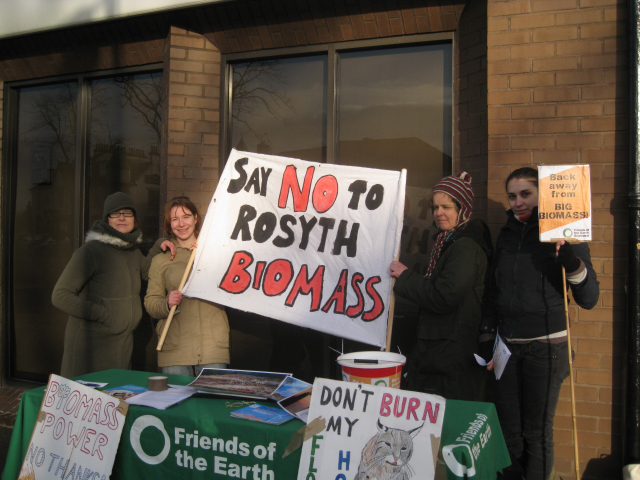 Our purpose was to first of all inform people about the negative implications of the project, and second of all to encourage them to take action and write to their MSPs about the issue to persuade them to discuss it in Parliament. We came prepared with a letter addressed to the local MSPs, outlining the reasons why the project should be opposed: air pollution, threat on human health, climate change, global deforestation and the insignificant number of promised work opportunities.

It was a pretty cold day but luckily it was sunny enough to keep us focused on what we set out to do. We approach around 100 people and got 36 letters signed.

Personally, I was surprised to find that most of the people in Rosyth had no idea there could be a biomass powered plant built just hundreds of yards away from their doorstep. However, the majority appeared interested in the matter and expressed their disagreement with Forth Energy’s polluting plan. Others were skeptical or needed to look deeper into the matter. We met a few that were in

favour of the project, but only because it would bring lots of job opportunities for Rosyth. We tried to make them see the downside of the situation by referring to the impacts on the natural environment and on their own personal health and we hope we made them think again.

We will shortly send out the signed letters and we hope the members of the Scottish Parliament will realise the project’s flaws and call on Fergus Ewing to reject it, along with the other similar proposals in Grangemouth, Leith, and Dundee.

What you can do

Write to your MSP

Donate to our biomass campaign

comprar cialis en madrid
This site uses cookies to store information on your computer. To find out how we use them please view our Privacy Policy.Accept AllNo Thanks
Manage consent