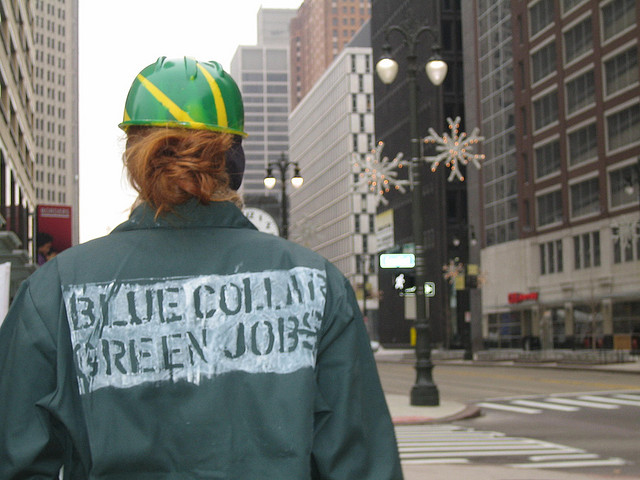 The need for a Green New Deal remains strong in Scotland – fuel poverty, unemployment, increased casualisation, missing climate change targets. It’s a popular idea as well, both with the public, the unions, social justice campaigners and with many politicians as well.

But are we as far away as ever from getting ‘a large-scale programme of works to convert to a to a low-carbon economy, generating more and better jobs? Looking only at home energy efficiency, the UK government has abandoned it, leaving only the failed ‘Green Deal’ and the Energy Company Obligation.

Yes, the Scottish Government has maintained and even increased its budget for home energy efficiency instead. Yes, Labour has said it will “insulate 5 million homes in ten years”.

Even to hit its own targets for greenhouse gas emissions the Scottish Government needs to revise its plans and put money behind them. There’s solid evidence of the economic and social benefits (1) so this approach can win popular support.

Where will the money come from for a massive investment programme like this? It can easily be done – by Green Infrastructure Quantitative Easing (2). This proposal uses the QE process to fund the transition to a sustainable low-carbon economy. Instead of directing money which the Bank of England creates into the financial system (and largely boosting speculative activity) it would direct it into green infrastructure bonds. In current economic circumstances this programme can be done debt-free and without risking inflation.

The Green New Deal Group proposes nearly £500bn of investment for new low-carbon infrastructure in the UK over the next 10 years. This might therefore fund as much £50bn investment in Scotland.

The Labour Treasury team is at the moment too cautious to advocate anything which is seen as unorthodox, but backing for this approach is increasing from highly respectable figures. Even within the Bank of England.

What can the Scottish Government do? It can advocate GIQE to the UK government. And in its absence, the Scottish capital infrastructure budget should be shifted towards investment into energy efficiency, CHP and sustainable transport. This can be enhanced by use of borrowing powers of up to 10% of the Scottish capital budget in any year. The 2014-15 capital budget = £2,400 m; so 10% is £240m a year. That would treble the size of the home energy efficiency programme, which can be done now, while preparing the rest of the infrastructure investment plan

Local government powers should be used as well as enhanced local social enterprise.

The economic benefits for working people and the improvements to quality of life and environment show that a Green New Deal can be a driver of transformational change.