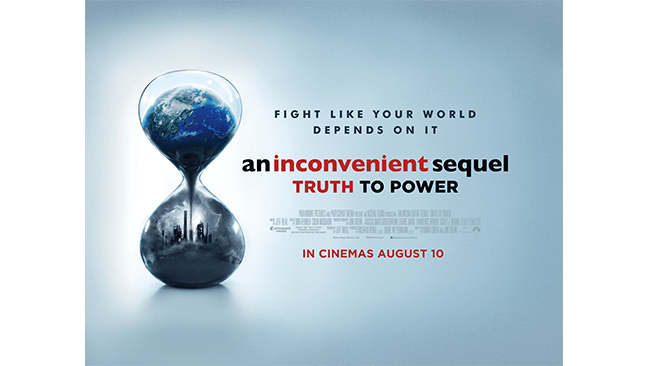 A decade after Al Gore first brought climate change to the big screen, he’s back in cinemas now with the follow up, ‘An Inconvenient Sequel: Truth to Power’. This next chapter comes at a time when Scotland is writing the sequel to our own climate story, but will our new Climate Act be a blockbuster or a flop?

Gore’s first film, An Inconvenient Truth, was a wakeup call for millions in 2006, raising awareness about climate change and the need to act. This year’s follow-up looks at how things have changed since then, and while the scale of the problem is clearer now, so too are the solutions.Each of the intervening ten years has seen record breaking temperatures, with 2016 being the hottest year on record. Extreme weather has swept the globe from flooding in the heart of New York City to this summer’s ‘Lucifer’ heatwave across Europe. Some scenes in the film feel more suited to apocalyptic fiction than a documentary – raging wildfires, homes crumpling under the force of flood waters and being carried away – but this is the reality of the climate crisis in which we find ourselves.

But we’ve also had some feel-good moments – world leaders coming together in Paris and reaching a global agreement on tackling climate change; the success of renewable energy rolling out at home and around the world.

The stage is set for the sequel to our own climate story. In 2009, Scotland led the world when we set ambitious climate targets in law. We’re on track to meet the 2020 target, and will probably beat it. Now the Scottish Government is preparing to premiere Climate Act 2 with new targets for cutting our climate emissions, but the previews suggest that this sequel isn’t set to be a blockbuster.

While the Paris Agreement means that all nations should update their climate plans and set more ambitious targets for reducing greenhouse gas emissions, the Scottish Government’s proposals suggest doing almost nothing extra.

Where eight years ago our government was ambitious and progressive, their new plans look deeply disappointing and fail to respond to the urgency of the situation. Our climate targets must reflect the best science and represent our fair share of global efforts to cut emissions. That’s why we’re calling for the Scottish Climate Bill to set a legally binding target of zero emissions by 2040, and a reduction of 77% by 2030.

The most moving moment in the film comes when 22 year old John Leonard Chan from the Philippines recalls his terrifying experience of being caught in the devastating Typhoon Haiyan in 2013. Thousands died in that disaster, and Chan shares his story in the hope that it will motivate people and politicians to act. This is the true story of climate change and we must not turn our backs.

The new Bill isn’t just about playing our part in the global effort; it’s also about the kind of Scotland we want to be, now and in the future. The actions needed to tackle climate change – from making our homes energy efficient, and moving away from fossil fuel vehicles to cleaner transport – can also tackle fuel poverty, create jobs, reduce inequality and build a fairer society.

We also want to see real support for farmers to become greener, and a serious plan for how we transition away from those industries heavily dependent on fossil fuels. These changes are inevitable as we move to a carbon-constrained world so it is vital that the Scottish Government begins planning and ensuring they happen in a way that is fair to the workers and communities involved.

Until 22nd September, the Government are asking people for their views on their climate plans. Everyone has a chance to rewrite the script and ensure this climate story has a happier ending.

Caroline Rance is a climate campaigner at Friends of the Earth Scotland.
A version of this blog appeared in The Herald in August 2017.