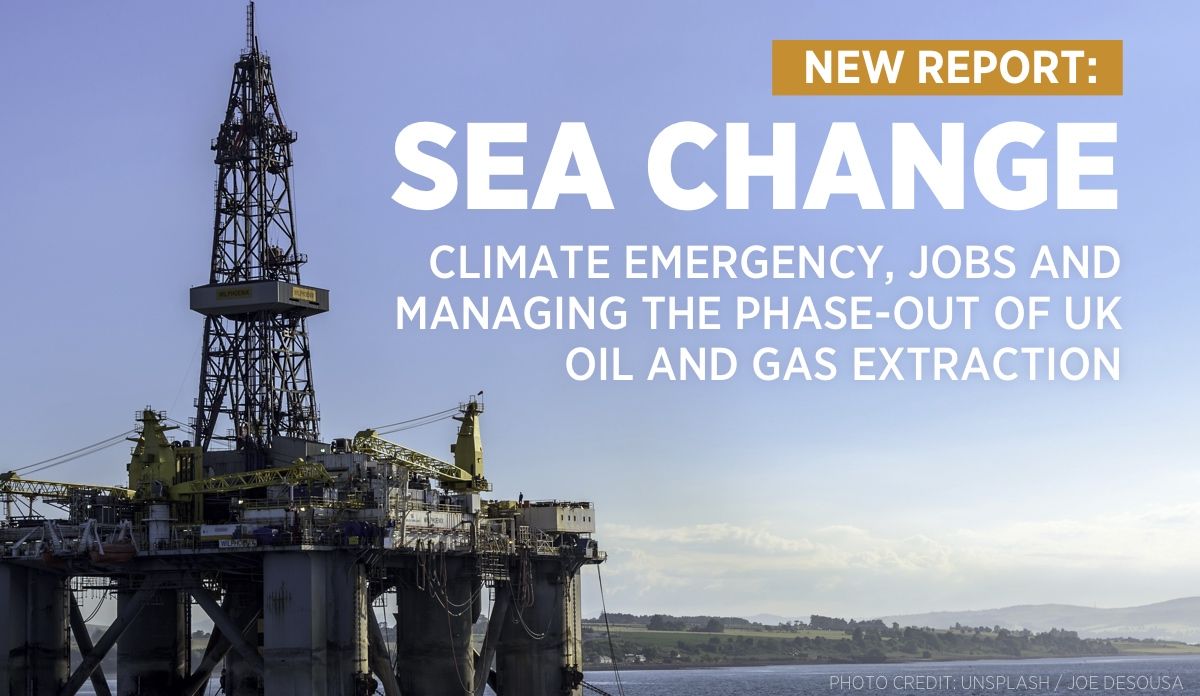 SeaChange report shows how we can protect climate and create jobs

We have published an exciting new report with Oil Change International and Platform today: ‘SEA CHANGE: Climate Emergency, Jobs and Managing the Phase-out of UK Oil and Gas Extraction’

The report comes in the weeks after the Scottish Government and UK Parliament declared a ‘Climate Emergency’ and makes an important contribution to the growing debate about how to tackle the crisis.

It is a well established fact that the vast majority of global fossil fuel reserves need to remain in the ground to avoid catastrophic warming. What our research does is it take this to the next level and look at what global and national climate change commitments mean for the UK’s oil and gas sector.

The new research in our report shows that the 5.7 billion barrels of oil and gas in already-operating UK oil and gas fields will exceed our fair share of Paris climate goals. But industry and government aim to extract 20 billion barrels – more than 3 times our fair share. If every fossil fuel producing nation did the same as the UK plans to, we will be living with climate breakdown in the not too distant future. Clearly we’ve got to stop drilling.

But the good news is that our research also shows that given the right policies, clean industries could create more than three jobs for every North Sea oil job at risk, which can enable an “equivalent job guarantee” for every oil worker.

On the other hand, putting off action to phase out oil and gas extraction and transform the offshore sector will likely result in a collapse of the industry, when the reality of the climate crisis really hits home and forces the government’s hand, putting tens of thousands of jobs and regional economies at risk.

What needs to happen

Based on these findings we recommend that the UK and Scottish Governments:
– Stop issuing licenses and permits for new oil and gas exploration and development, and revoke undeveloped licenses;
– Rapidly phase out all subsidies for oil and gas extraction, including tax breaks, and redirect them to fund a Just Transition;
– Enable rapid building of the clean energy industry through fiscal and policy support to at least the extent they have provided to the oil industry, including inward investment in affected regions and communities;
– Open formal consultations with trade unions to develop and implement a Just Transition strategy for oil-dependent regions and communities.

Watch the videos of report authors explaining their work from the launch in Edinburgh.

Watch the videos
This site uses cookies to store information on your computer. To find out how we use them please view our Privacy Policy.Accept AllNo Thanks
Manage consent