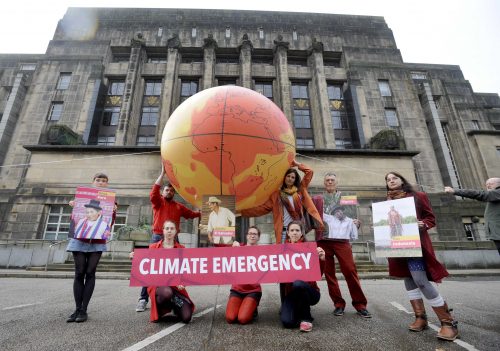 Today Shell is celebrating 50 years of operations in the North Sea. But there isn’t really much to celebrate.

Fifty years ago, the oil industry already knew that climate change was a threat, yet they carried on regardless. The American Petroleum Institute had commissioned US scientists to look at the consequences of burning fossil fuels. In 1968 those scientists said that carbon dioxide was definitely a concern, that continuing to burn fossil fuels would lead to increases in temperature at the earth’s surface, and that significant temperature increase could lead to melting ice caps, rising seas, and potentially serious environmental damage worldwide. They said “there seems to be no doubt that the potential damage to our environment could be severe.” They said that 50 years ago.

And so began half a century of wilful denial and collusion by oil companies to try and cover up climate change.

In the 1970s another oil company, Exxon, spent millions of dollars on newspaper ads trying to cast doubt on climate change. Meanwhile the company’s own scientists were telling senior executives that climate change is real, warning of “dramatic environmental effects before the year 2050.”

In 1998 Shell’s own scientists wrote an internal report warning that “by the time the global warming becomes detectable it could be too late to take effective countermeasures to reduce the effects or even to stabilise the situation.”

Throughout the 1990s the oil companies worked together in the Global Climate Coalition, turning up at the UN climate conferences to try to make sure as little as possible was done to reduce climate pollution. Since this coalition was discredited, oil companies have continued to fund organisations which deny climate change or lobby against action.

Fifty years on from Shell’s start in the North Sea we are seeing the consequences of climate change all around the world. We’ve just had the warmest and sunniest May-July period ever recorded in Scotland, massive wildfires in the western US and Canada, heatwaves declared national emergencies in Japan and North Korea, and a devastating drought in Australia. Climate change is killing people and wrecking lives now.

Even if every country in the world does everything it has promised to reduce emissions – a very unlikely prospect – we will still reach a temperature rise twice the so-called safe limit by 2100, four times the temperature rise we have already seen to date. We know that the world can only afford to burn less than a fifth of known global fossil fuel reserves.

Yet Shell carry on as if they can continue to pump oil forever.

If we are to have any chance of keeping the planet out of the extreme danger zone the oil companies must transform or die. Exploring for new oil and gas needs to stop everywhere. Current jobs in oil and gas need to become jobs in offshore and onshore renewables and energy efficiency. We can do all this with strong leadership. And we can do it with or without the oil companies.

Shareholders have challenged Shell to change at recent AGMs and now our sister organisation in the Netherlands is taking them to court to force the company to commit to a business model which helps the world meet the targets in the 2015 Paris Agreement, rather than ensuring we blow the global carbon budget in the next few years. More than 20,000 people from 70 countries have signed up to support this legal action.

The planet cannot afford to have Shell still exist in their current form in even another 5 years, let alone 50.

A version of this article appeared in The Scotsman.