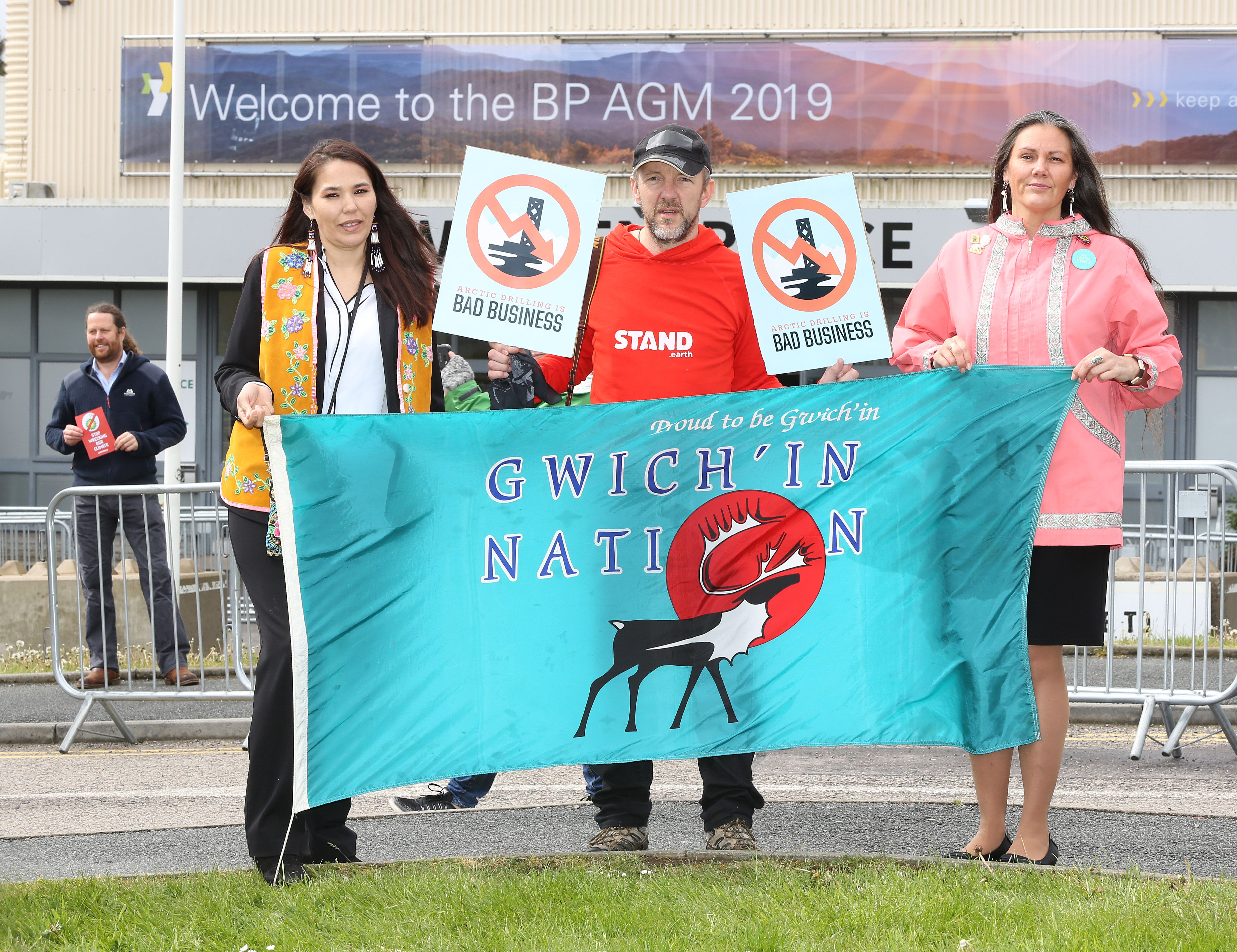 Solidarity with frontline communities at the BP AGM

Oil giants BP held their global AGM in Aberdeen today, so we went along to call time on their destructive activities.

Climate science is clear that we urgently need to phase out fossil fuels, yet BP are doing everything they can to squeeze out every last drop of oil.  We call on governments and fossil fuel companies to end new oil and gas extraction, and work towards a just transition away from fossil fuels to a zero carbon future.

But while the climate impacts of fossil fuels are well known, less light is shed on the impacts hitting frontline and Indigenous communities in the drilling areas.

We stood in solidarity with communities fighting BP in Alaska, the Amazon and Mozambique, calling for an end to BP’s destruction around the world.

After a protest outside, I headed inside to speak at the AGM on behalf of our friends and colleagues in JA! Mozambique (Friends of the Earth Mozambique) to ask BP why they are backing a destructive new gas project in the country.

I was at #BPAGM today on behalf of our friends @JA4change (FoE Mozambique) to ask BP why they back a new gas project in Mozambique that’s forcing these people – & hundreds of others – off their land, devastating communities & destroying local environment

Here are some extracts from the statements of Indigenous and frontline campaigners standing up against BP today.

“BP will be the sole buyer of gas from the new Coral LNG (liquefied natural gas) Project in Mozambique, which is led by Italian energy giant Eni and ExxonMobil. While BP is not extracting the gas themselves, their agreement with Eni is enabling, and giving the green light to this project that violates many environmental and human rights.”

“80% of Mozambicans don’t have access to electricity, but none of the gas will be used to their benefit. Instead the LNG will be processed and exported to other countries, in particular Asia and Europe.”

“The impact of the gas project on climate change is immense, increasing the entire greenhouse gas emissions of Mozambique by nearly 10% and the carbon will remain in the atmosphere for between 100 and 500 years, long after the project is completed.”

“BP must pull out of this and all other fossil fuel projects. The people and planet must come first.”

Ilham and JA! colleagues are working directly with communities in Mozambique to resist this gas project. Watch their film here.

BP want to drill for oil and gas in the Arctic National Wildlife Refuge, an area of sacred land for the Gwich’in Nation in north east Alaska. The Gwich’in call the coastal plain “Iizhik Gwats’an Gwandaii Goodlit” or “the sacred place where life begins”. Indigenous groups are fighting back and representatives from the Gwich’in and Iñupiat people were at the AGM to challenge BP.

Bernadette Demientieff, executive director of the Gwich’in Steering Committee, representing the Gwich’in Nation.
Sadly Bernadette, who travelled from Alaska to be here, was not allowed to speak inside the AGM, apparently due to a registration technicality. Ben Cushing of Sierra Club read her statement to BP chief executive and board.


“For the Gwich’in people, the Arctic Refuge coastal plain is sacred ground. For thousands of years, my people have lived along the migratory route of the Porcupine caribou herd and depended on the herd for our food security and way of life. Today, wild game including the caribou herd still provides 80% of our diet.”

“Drilling here, where the caribou calve their young, would harm the herd and disrupt the migratory route they’ve been following for centuries, posing a direct threat to my people, the Gwich’in.”

Greetings from Aberdeen, Scotland, where @BP_plc is holding its annual shareholders meeting today.

On the way in, a great crowd of people were here to demand BP take real climate action & #ProtectTheArctic. Beautiful to see people around the world #StandWithTheGwichin. ✊ #BPAGM pic.twitter.com/0rEaz3UEIf

“I represent the voices of actual human beings who oppose drilling outside the village of Kaktovik.”

“The Indigenous people of the North Slope are overwhelmingly against drilling in both the land and sea, as our subsistence hunting, fishing, and whaling are threatened by this proposed drilling.”

“Now is not the time to invest in a failing industry with a finite supply of oil and gas. These are the fuels of the past. We have better options.”

“Do not be complicit in the destruction and the collateral damage of irreplaceable, invaluable intact lands and the lives and rights of Indigenous Peoples who depend on this land since time immemorial.”

“Let us work together to keep the land whole, safe and beautiful for thousands of years more.”

Keeping up the pressure

Major polluters like BP are feeling the heat after these powerful challenges from campaigners, the protests both inside and outside their AGM and the Greenpeace action at their London HQ. Indigenous leaders also joined climate activists targeting BP’s HQ in Denver yesterday over the company’s plans to drill in Arctic.

BP and other fossil fuel corporations need to stop exploring for new sources of oil and gas that our devastating our climate. Real climate leadership means making tough decisions now that put us on a path to a climate safe future. A Just Transition for workers and communities currently dependent on high carbon industries here in Scotland is an essential part of that.

That’s why we are calling on Nicola Sturgeon and Theresa May to stop exploration for new oil and gas in the North Sea.

Sign the petition now
This site uses cookies to store information on your computer. To find out how we use them please view our Privacy Policy.Accept AllNo Thanks
Manage consent