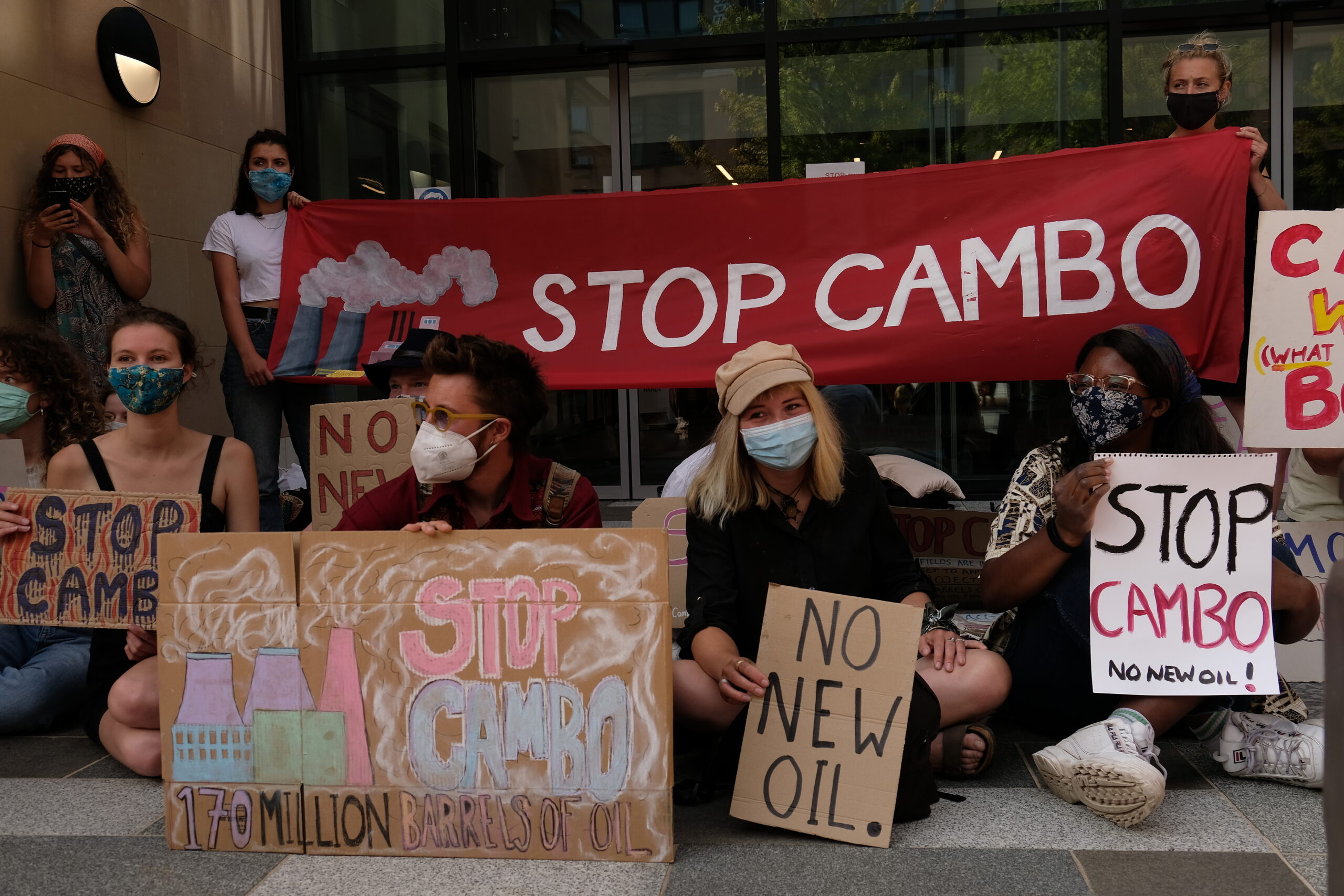 On Monday morning at about 7:30am, a group of people wearing bright colours, carrying mats, placards, snacks and a lot of water walked into the new ‘flagship’ UK Government building just off Edinburgh’s Royal Mile and occupied the entrance.

Another group quickly followed and held huge colourful banners that read “Stop Cambo”, “More green jobs” and “No new oil” across the doors, blocking off the entrance from the outside as well.

Despite repeated threats of arrest, an ever increasing police presence and a skillful operation to pass 52 playing cards 1 by 1 underneath the locked doors to keep the people inside entertained, nine hours later the building entrance was still blockaded and the crowd outside grew to around 200 people.

Speeches, placards and chants made it very clear that the UK Government needs to do one thing regarding the decision currently sitting on Business Secretary Kwasi Kwarteng’s desk: turn down the application to drill the Cambo Oil Field.

The event gained great media coverage featuring on TV and across media outlets. It was a powerful day, with groups from across the movement, as well as many new people, joining together to take action to #StopCambo. See photos of the day here

“It is not enough for the Scottish Government to remain silent on this one.

“You too are under the spotlight as #COP26 comes to town.

Cambo is a huge new oil field, off the west coast of Shetland.

Just weeks after the International Energy Agency (IEA) said that if we’re to meet that Paris Agreement goal there should be no new coal, oil or gas developments anywhere, oil giant Shell was ordered by a court in The Hague to cut emissions by 45% by 2030, and months before the UN Climate Summit comes to Glasgow, the ‘climate leaders’ in the UK Government are looking to approve this devastating project.

Shell and Siccar Point Energy want to begin by extracting 170 million barrels of oil, equivalent to running 18 coal power stations for a year, and plan to keep drilling until 2050.

Obviously we have to stop this. Many groups across the UK and beyond have jumped into action and have been working together as a united force to #StopCambo.

Two weeks ago we launched an open letter to Boris Johnson which has over 55,000 signatures. Activists in London took action outside Shell HQ last week, with someone dressed as Boris Johnson covered in oil. Even the US Special Presidential Envoy for Climate, John Kerry has said the UK Government needs to think “very, very carefully” about approving this new field. The Head of the International Energy Agency also spoke out against the project on the Channel 4 News.

MSPs from Scottish Labour and the Scottish Greens have submitted motions to the Scottish Parliament calling on them to speak out about Cambo.

Saying no to Cambo is just the beginning. Instead of fighting every new application as they come, we need to change the law and ban all new oil and gas drilling in the North Sea. Around the world, other countries are already doing just that. Belize, Costa Rica, Denmark, France, Spain, New Zealand and Portugal have all banned new offshore oil and gas production. Scotland and the UK must follow suit.

As well as saying no to new oil and gas drilling, we need a plan to wind down production of North Sea oil and gas over the next decade. This must go hand in hand with increasing renewable energy and ensuring a just transition for workers and communities by supporting retraining and providing new jobs.

What can you do now?

The action on Monday was the beginning of the fight, not the end. We need to stop cambo, stop all new oil and gas projects and secure a just transition for the workers in the industry.

Young Friends of the Earth Scotland ran an online action on Friday 23rd July from 1-4pm.

We joined @stopcambo to spend our afternoon calling, tweeting and memeing at the decision makers and investors of Cambo oil field telling them to #StopCambo! ❌

We got our hashtag trending and filled up their phone lines! 🔥

If you haven’t already, sign the open letter and share it widely on social media and with friends and family.

Email your MSP asking them to Stop Cambo.

If you want to get more involved in future actions and events, email activism[@]foe.scot