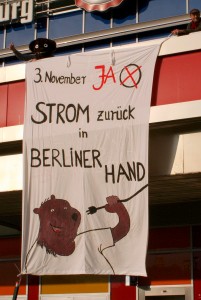 The story of the following referendum already began two and a half years ago in 2011 with the formation of the Berliner Energietisch, roughly translated as Berlin Energy Roundtable.

The alliance of 56 local civil society groups is the initiator of an impressive big campaign in which Berlin’s citizens were asked to ‘reclaim’ Berlin’s power. The overall aim is the establishment of a more ecological, social and democratic energy supply in Germany’s capital. However this demands several concrete steps like the municipal ownership of the electrical power grid and a community-owned energy supplier designed as a modern energy service has to be established.

In consideration of the German turnaround, the aim must be to provide Berlin on a long-term run with a hundred percent decentralized produced, renewable energy. A community-owned energy supplier will therefore offer only genuine green electricity, which comes primarily from renewable energy plants in the Berlin-Brandenburg region.

Besides that, energy saving and efficiency are defined as key business objectives. Especially in Berlin, a public owned energy utility must have an explicit social orientation against energy poverty. Possible fields of activity are for example a targeted counselling of low-income households. Also the switch to more efficient appliances has to be encouraged.

Finally the idea of a democratic control demands also broad transparency rules and a number of opportunities for the Berlin citizens to participate in this process that go far beyond the well-known parliamentary control of state-owned enterprises.
These i

deas were written down in a draft law that was put up to vote on 3rd November 2013. 600.000 Berliners voted in favour of the initiatives ideas. But it failed due to a Berlin-specific barrier – a 25- per cent quorum. This means that a valid referendum is just achieved when at least 25 per cent of Berlin’s electorate, in total 2.4 million, say ‘yes’. So although more than 80 per cent voted with ‘yes’ the referendum failed. In the end only 21.000 votes were missing.

Nevertheless the Berliners have set a clear signal towards a public owned energy supply and this could not be neglected, neither by Berlin’s federal state government nor by referendum opponents.