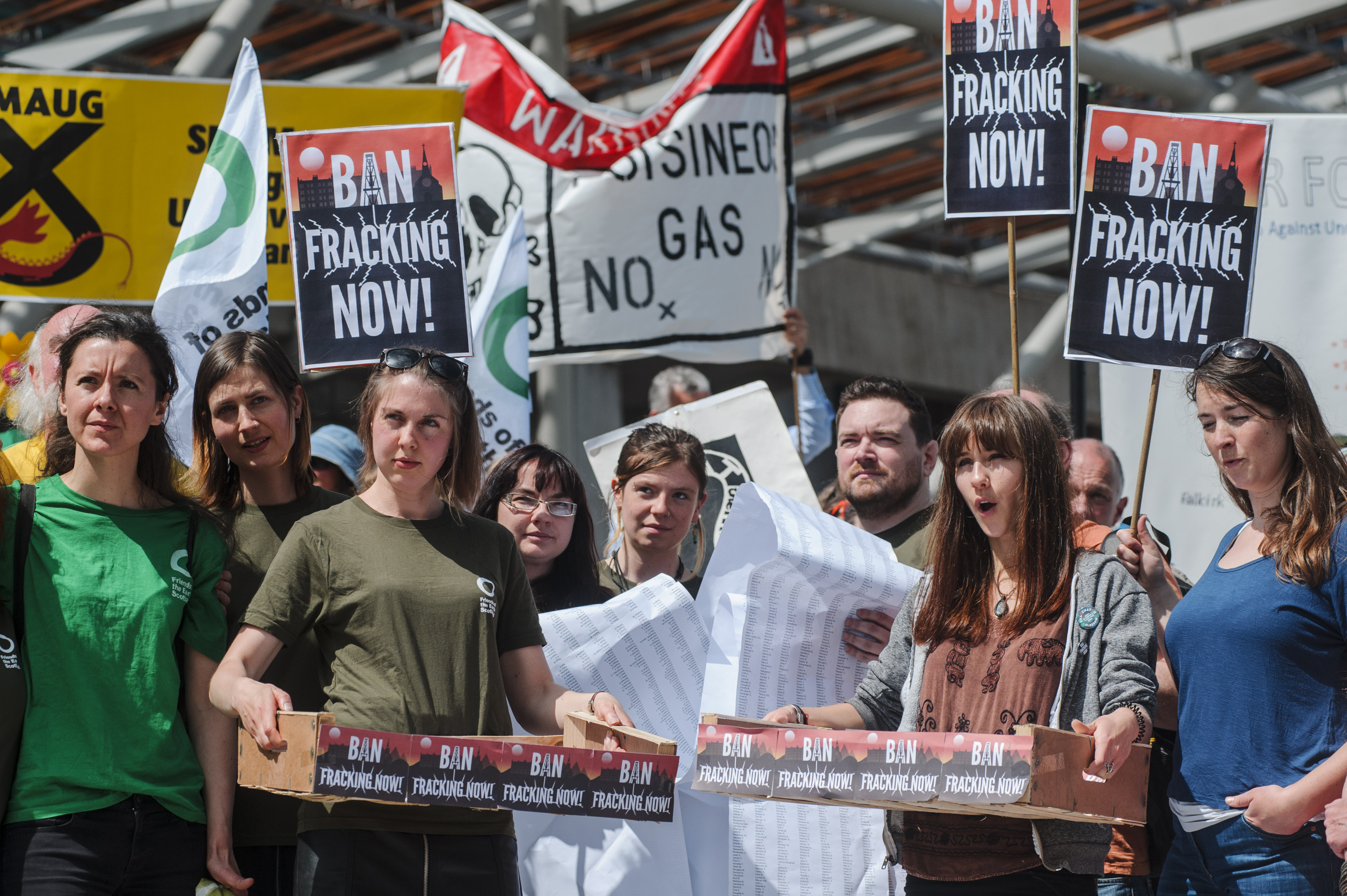 More than 40,000 people have responded to the Scottish Government consultation on fracking calling for an outright ban. Communities and campaign groups have been out on the streets, holding public meetings, film screenings and other events over the four month consultation period to get the word out about the risks that fracking and unconventional oil and gas extraction pose to public health and the environment.

A big crowd gathered outside the Scottish Parliament on Wed 31st May, as representatives of the Broad Alliance, Friends of the Earth and 38 degrees delivered thousands of consultation responses to Energy Minister Paul Wheelhouse. See the photos

“The symbolic handover by the Broad Alliance of their submission to the Consultation on Unconventional Oil and Gas is the culmination of years of dogged determination and diligent research into this method of fossil fuel extraction. The submission states unequivocally that communities across the length and breadth of the country completely reject any form of Unconventional Oil and Gas Extraction. We call on the Minister to listen to the people of Scotland and ban it completely.”

Mary Church, Head of Campaigns at Friends of the Earth Scotland said:

“This enormous public response clearly demonstrates Scotland’s overwhelming rejection of fracking. Combined with powerful evidence of multiple health and environmental risks, and the clear conflict with our climate change plans, this reaction to the prospect of fracking in Scotland must surely convince the Minister that a full ban in law is the only reasonable way forward.

“Fracking and unconventional fossil fuel extraction threaten people’s health, our climate change targets and local economies. Opening up the central belt of Scotland to the fracking industry isn’t worth the risk to the environment and our health, nor is it worth the political risk for the SNP.”

“People across Scotland have stood up to say ‘no’ to fracking in their tens of thousands. That’s a powerful and persuasive statement from people who will have to live with the impact of fracking if it’s not banned. Analysis funded by 38 Degrees members and vast amounts of other research show that the risks of allowing fracking far outweigh whatever perceived benefits it might bring. Why on earth would we want to gamble our economy, environment and potentially people’s health on fracking?”

As groups chanted ‘Love Scotland, Ban Fracking’, and ‘Not here, not there, we don’t want fracking anywhere!’ news broke that the Irish Parliament passed a law banning fracking this afternoon.

The ‘Talking Fracking’ consultation ran for 4 months, and closes on Wednesday 31st May. The Scottish Government will conduct an analysis of responses over the next few months and has committed to making a recommendation to Parliament before the end of the year.

MSPs will be invited to debate and vote on the issue, before Ministers make their minds up on the future of the industry. Energy Minister Paul Wheelhouse had stated that “of course [the Scottish Government] will respect the will of Parliament on this issue.” In June 2016, Parliament voted to ban fracking in response when Labour, the Greens and Liberal Democrats voted in favour of a motion, the Tories against and the SNP abstained.