Home Blog The ghost of nuclear past

The ghost of nuclear past

The Fukushima nuclear disaster in March this year, while ongoing, has slipped down the news agenda over the summer. It has been pushed outside our immediate attention by the economy and the News International hacking scandal. As late as today (2 August) The Guardian reported that Fukushima radiation reaches lethal levels. If you needed a reminder...

The Fukushima nuclear disaster in March this year, while ongoing, has slipped down the news agenda over the summer. It has been pushed outside our immediate attention by the economy and the News International hacking scandal. As late as today (2 August) The Guardian reported that Fukushima radiation reaches lethal levels. If you needed a reminder why we don’t need nuclear power, Fukushima was the worst kind of wake-up call. I feels like the past coming back to haunt us, but Friends of the Earth Scotland are calling to action to stop nuclear power in Scotland. 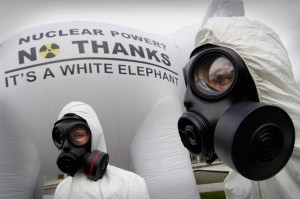 In the shadow of Fukushima, some European governments have realised that trying to replace our dependency on fossil fuels with nuclear power is not a viable move. Nuclear power is simply to dangerous and too expensive, and the waste it leaves behind is a risk to the environment for hundreds of thousands of years into the future. You can donate to help us to play our part in the European campaign against nuclear power.

the Earth Scotland was born in 1978 out of the Scottish opposition against nuclear power, and the struggle is continuing to this day, and will until the last nuclear power station in Scotland has been shut down.

Please donate to our campaign today and help us campaign against nuclear power.

Back to all
Clean energy’s dirty side

Mining for materials used in renewables should not threaten human rights.

More On This
No future for nuclear power

The politics of Scotland mean that new nuclear reactors here are almost unthinkable and the price of the renewable energy alternatives have fallen way below the cost of nuclear.

More On This
Let’s be climate leaders in 2017

Many people would rather forget 2016 and its catalogue of mistakes, disasters and deaths. The election of Trump poses a real threat to environmental progress and climate action. Richard looks ahead to a busy 2017 for climate campaigning and getting Scotland on the path to a fossil free future.

For a while this meeting looked like it might be that rarest of things, a UN climate conference that actually finished on time rather than running into Saturday or even Sunday. But, true to UN form, talks broke down last night.

Ministers and heads of state came to the COP today. Finance has been a big issue with rich nations shirking responsibilities and scepticism that more money or action will emerge.

Yesterday at the UN Climate Conference in Marrakech a broad coalition of development, union, faith and environment groups laid out their analysis of where the world is heading and the urgent action that is needed to meet the targets agreed at last year’s conference in Paris. The group includes ActionAid, Christian Aid, Friends of the...