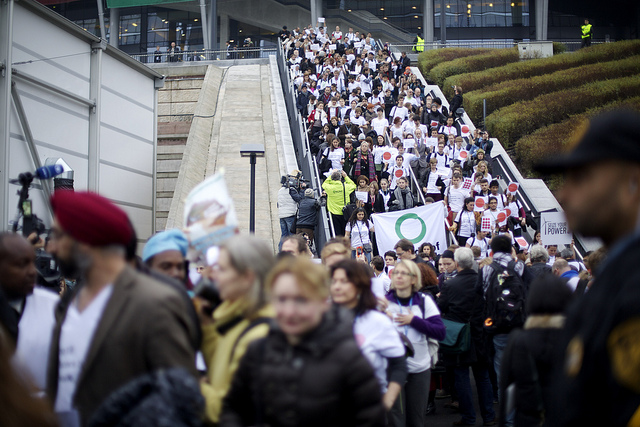 The People’s Test on Climate

Friends of the Earth groups all around the world are at the forefront of the fight against climate change. In Scotland they are encouraging Local Pension Funds to divest from fossil fuels, they are stopping fracking in Lancashire and Les Amis de la Terre (FoE France) are highlighting fossil fuel industry bad practice through the Pinocchio Awards.

This United Nations Conference of Parties (COP21) in Paris this December will try to agree an international deal to tackle climate change. We know that what is being proposed will not meet what science requires or deliver the transformation we need. We have always called for a solution to the climate crisis that recognises that the crisis is inextricably linked to inequality and poverty, as Pope Francis so eloquently stressed in his recent encyclical.

We also know that despite all the climate warnings, politicians are still acting in the interests of powerful corporate and vested interests, and will continue to do so until we, as a climate movement, are more powerful than they are. That is why we have been working jointly with others – Southern social movements, faith-based organisations, trade unions, and some of the global environment and development NGOs to develop shared moments of action and a collective understanding. Over the last few years we have worked together over the ‘Volveremos’ walkout at the corporate-captured Warsaw climate talks and the ‘Volveremos’ June action on energy transformation as just some examples of that collaboration.

We know that some Governments and even some civil society groups are saying that Paris is our last best chance to “save the climate” and that whatever the outcome they will sell it as a success. Their theory of change rests on making politicians political heroes and then hoping they will act. We however know that plan hasn’t worked. We want to tell a different story, one that empowers people rather than assuming our governments will fix our problems.

We, together with other civil society groups, have developed a joint understanding of this process:

Friends of the Earth national groups are adopting a similar approach to Paris and beyond – and we will be placing emphasis on our movement building around core People’s Demands.

That is why, together with the other civil society groups, we have created a People’s Test on Climate .

o    Emissions reductions – urgent short-term action leading to a long-term global goal of phasing out all fossil fuel use;

o    Support for transformation in developing countries – public finance, technology transfer, and capacity building for both mitigation and adaptation action;

o    Justice for impacted people – including compensation for loss and damage and a just transition for workers; and

Given the existing politics at national and global level it is currently very unlikely that the Paris agreement will fully meet the above standards. And we will judge the outcome according to this test.

On Monday 29th June the UN hosted a high-level summit on climate change, so we addressed our letter to the president of the UN General Assembly and the Peruvian and French presidents of the UN climate negotiations.  We have also contacted diverse media outlets, and issued this statement in French, with other languages to follow. Read the full letter: People’s Test on Climate in 2015

You can play your part by joining thousands of others in calling for an end to dirty energy and for greater support for community-owned renewables. Join the energy revolution now!

Friends of the Earth Scotland will take at least 100 people to Paris for the talks in December.  On 11th-12th December we’ll join inspiring, international mass mobilisations to mark the peak of two weeks of civil society action.  To find out more and register your interest now go here.