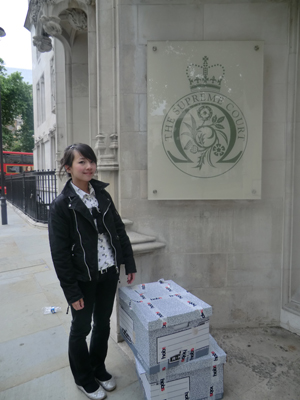 On Monday afternoon, around four o’clock I received a text from Juliet Swann asking if there was any chance that I’d be

up for a day trip to London leaving tomorrow morning. I was free tomorrow so I immediately accepted!

My mission was to hand deliver a parcel to the Supreme Court at Westminster leaving on the 7:30am train. Nothing was finalised yet so I did not have any further information except that it was extremely important.

As I had an opportunity to go to London I invited my sister, Yan along for a day trip since we were free to do whatever once we delivered the parcel.

Later that evening, I find out from Juliet that the parcel turned out to be two large heavy boxes. Luckily Yan was still coming along to help delivery these super important boxes tomorrow. I still had no idea exactly what I was delivering and what else I had to do when I got to the Supreme Court.

Yan and I got up around half five the next morning to meet Juliet at the Waverly Station at 7.15am where we first saw just how big the boxes were. It was bigger and heavier than I expected consisting of fifteen level arch files so just as well I brought help. My worries on taking them on the tube and trying to work out where the location of the Supreme Court was quickly erased when Juliet proposed we got a taxi. Which made more sense…

Our mission was simple. Board the half seven train to London. Grab a taxi to the Supreme Court and then drop it off at the registry to a guy called Robert.

The journey was pleasant and quiet. We finished writing the rest of the labels Juliet started last night to be attached to the front and the spine of each file – they read AXA and others v Lord Advocate and others, Intervention by Friends of the Earth Scotland: Intervention and Authorities.

We arrived in London at half twelve. The boxes were not carrying friendly either being an awkward size and super heavy. We found a trolley though; just as well as I almost couldn’t carry them any further!

There was a bit of a queue at the taxi stand. We unloaded the boxes and Yan returned the trolley. People were clearly in a rush and proceeded to skip in front of me as I struggled to move both boxes. Also when we were nearly at the front of the queue, these two businessmen came out of nowhere and skipped in front of us! They could clearly see we were closing the gap of the queue with our slow walking and massive boxes. But apparently their mission was more important than ours and jumped on a taxi before us.

Anyway we got a taxi soon and the old man looked confused when I told him that we wanted to go to the Supreme Court. He asked “Which one?” and I thought there was only one? Luckily Juliet told me it was opposite Big Ben and Westminster so off we went.

Upon arriving at Westminster the taxi driver asked me if the Supreme Court was over there. I was kind of relying on him to know…but luckily his guess was right!

The Supreme Court is a beautiful neo-gothic building and the guards there were lovely offered to help us carry the boxes to be security checked. The receptionist also offered to help us carry it to the registry (we declined) and he showed us the way instead. The man at the registry was impressed we had brought these all the way here from Scotland. He then proceeded to grab a trolley after realising how heavy they really were.

We enjoyed the rest of our day in London before boarding the half six train and arriving back in Edinburgh half eleven last night. It was an exhausting day but a great experience and we both thoroughly enjoyed it. It was great do something so important for Friends of the Earth Scotland too!