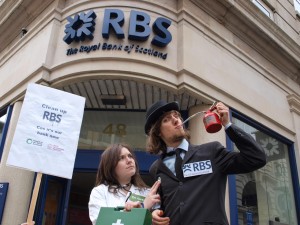 Bailed out Royal Bank of Scotland yesterday announced losses of £1.13 billion, and in the same breath awarded themselves £950 million in bonuses.

These unhealthy results reflect the unhealthy investment focus of a bank still addicted to fossil fuels.

Since the 2008 bail out RBS has provided finance of nearly £3.6bn in direct loans to fossil fuel companies and has helped raise equity finance worth an additional £9.3bn. Of this £13bn, just over £1bn has financed companies involved in tar sands mining, an industry now widely recognized to be trampling recklessly over human and environmental rights.

We know that many global businesses are involved in or turn a blind eye to human rights abuses and environmental destruction, but it can be hard to know what to do about it, or to feel you can have an impact on the behaviour of the vast, faceless, corporate giants of the world.

The difference with RBS is that it’s our bank now. It’s ours because we bailed it out in 2008 and now we own an 83% share. So when it comes to what this corporate gets up to, we are not helpless.

The UK government has a duty to direct RBS in the interests of UK taxpayers. It’s keen to return the bank to profitability, then put it back into private hands. Taxpayers would like to see a profitable RBS, but not at the expense of human rights and the environment.

One of the few good things to come out of the first Con-Dem budget was the proposal for a Green Investment Bank that would support investment in low-carbon projects. But really, that’s what all the banks – particularly the state owned ones – should be doing anyway.

A strategic move from a large and influential financial institution like
RBS towards financing much more green energy, and pulling out of destructive fossil fuel industries could have a hugely positive knock on effect.

RBS as a Royal Bank of Sustainability/Green Investment Bank would serve the interests of taxpayers and the environment, by financing a just transition to a green economy, instead of

funding climate change and lining the pockets of bankers.

Email Vince Cable now to ask him to

make sure that the bailed out banks start behaving like Green Investment Banks.