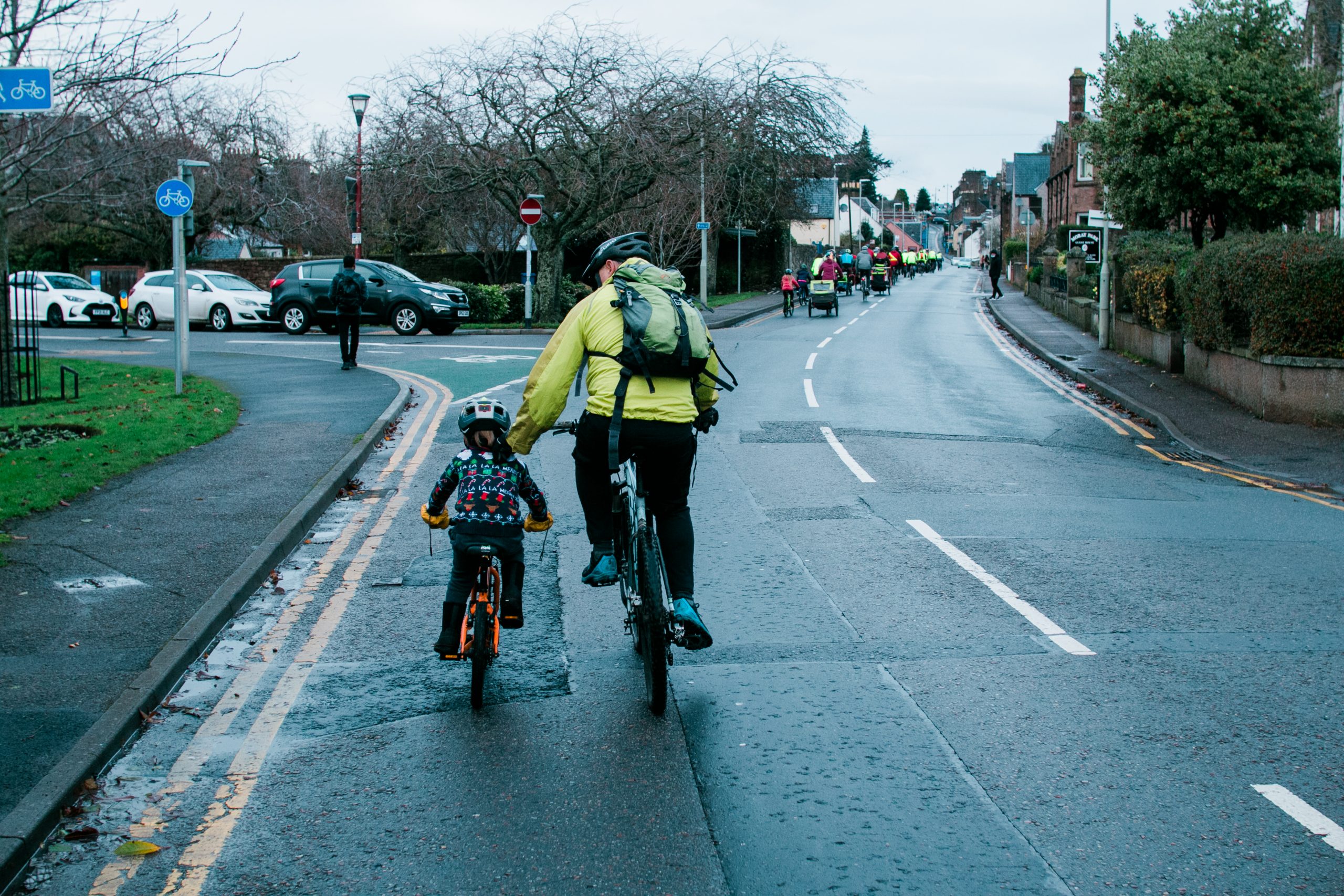 If you live in Inverness, you might have seen a big colourful bike ride around the city centre. It’s called Kidical Mass and since the first one in Scotland started in Inverness, we’ve seen the idea begin to spread across the rest of the country as people call for safer cycling.

They are well established so far in Inverness, Perth and Dundee – but I’m sure we’ll see more of them in our towns and cities soon.

The name is a pun on ‘critical mass’ – a bike ride which happens in cities around the world – including Inverness, Glasgow and Edinburgh – for cyclists to reclaim space by riding together.

We’re also starting to see more ‘bike buses’ popping up to help children cycle to school while staying safe and protected by going in a group. These bike buses, for example at Shawlands Primary in Glasgow and Corstorphine Primary in Edinburgh, are great because cycling and physical activity really benefits children at school.

All of these rides are safely stewarded, mainly by mums and dads, and are loads of fun.

Why are these ideas taking off so quickly?

This rise in open and accessible rides to help children cycle safely has likely been encouraged by the shifts in how we moved around over the course of the pandemic.

During the first lockdown back in spring 2020, there was a huge increase in family cycling because there were no cars on our streets. The safety that this brought encouraged lots of people who wouldn’t otherwise have cycled to get out on the roads with their children.

When the cars started returning, many people stopped cycling as much because they didn’t feel as confident on the busy roads. This is why it’s so important that bike rides are stewarded with plenty of hi-vis

Research has shown that many parents would rather not drive to school but they are worried about safety – so these initiatives are a great way to tackle this and show councils what change is needed.

Meanwhile, over the last couple of years, cities across Europe have been closing off to cars so that they can open up to people. Paris and London have both made changes to make it easier to get around by bike.

Closer to home, Glasgow City Council has announced big plans for reshaping the city centre. But many of our cities and large towns have stayed still – and even reversed the spaces for people measures that were brought in during the pandemic. ​

What unites all these rides and campaigns is that families are moving faster than councils. People want to be able to cycle around safely and to do that at the moment – while they’re waiting for councils to build segregated cycle networks – they need to have a lot of adults in hi-vis.

The money is available for cycling. The Scottish Government will spend 10% of the total transport budget on active travel (walking, wheeling, cycling). This is the necessary level of investment to reduce car use and consequently to reduce greenhouse gas emissions, and it’s a massive increase on the spending we’ve seen in recent years.

So there’s loads more cash coming for councils that want to create new cycle lanes, or improve pavements, or create small green spaces from former parking spaces, or a hundred other ways to make our towns safer and greener. The only question is whether councils will spend it.

If you want to set up a Kidical Mass ride in your town, a good place to start is by contacting the fantastic organisers in Inverness.