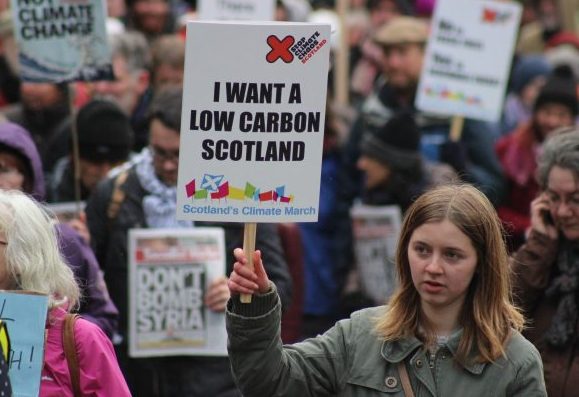 The Scottish Government’s new Climate Bill has been unveiled. It is hugely disappointing.

The Bill should have set a target date to end Scotland’s contribution to climate change. It failed to do that.

What the Bill says

While it includes a new section called ‘the net-zero target’, it doesn’t actually set a net-zero target! Nor does it commit us to cutting our emissions further in the next decade – only marginally bringing forward their 66% target from 2032 to 2030.

It contains no new policies which would help us achieve the necessary cuts to greenhouse gas emissions, particularly needed in areas such as agriculture and energy efficiency that are responsible for the bulk of our climate emissions.

What does this mean?

The Scottish Government has disregarded the voices of over 19,000 people in Scotland who asked for a net zero target by 2050 at the latest. The Government chose not to listen to the advice of eminent global scientists, or members of the farming community, faith leaders and those at the front line of climate change impacts around the world.

As it stands, this Bill does not deliver on the Paris Agreement. Nor does it deliver climate justice for the millions who already dealing with the devastating impacts of climate change. But we still have time to change that.

Until now, the Climate Bill has been solely in the hands of the Scottish Government. Now it’s over to MSPs in the Scottish Parliament to have their say before it finally becomes law.

Starting this month, the Environment and Climate Change Committee in the Parliament will invite experts in to examine and give their opinion on the Bill. This is an opportunity for MSPs to hear evidence about climate change and call for the inclusion of stronger targets and policies in the Bill.

This Committee will then produce a report on the evidence they’ve heard. All MSPs will debate the Bill in Parliament and be able to suggest amendments to it.

Given that the Government doesn’t have a majority in Parliament, every MSP of every party could play a crucial role as we work to strengthen this Bill. It is important that you contact your own MSPs and tell them that you want them to take these opportunities to strengthen Scotland’s climate ambition.

How can you get involved?

We’re calling on MSPs from all parties to push for stronger targets on emissions. This means net-zero by 2040 at the latest, 77 per cent by 2030 and the action needed to deliver on them in line with the Paris Agreement. They need to see that you want Scotland to remain a global climate leader by committing to higher targets.

You can email your MSP today to see where they stand.

We’re also touring Scotland this month with workshops and a documentary film screening. The workshop will skill people up to meet their MSPs to talk about the Bill, to organise locally and connect up with other campaigners.

The film ‘Not Without Us’, kindly supported by Take One Action Film Festival, is a rousing documentary that connects the dots between fossil-fuel driven economies, growing inequality and government inaction in the face of the climate crisis.


Find out about the tour
This site uses cookies to store information on your computer. To find out how we use them please view our Privacy Policy.Accept AllNo Thanks
Manage consent