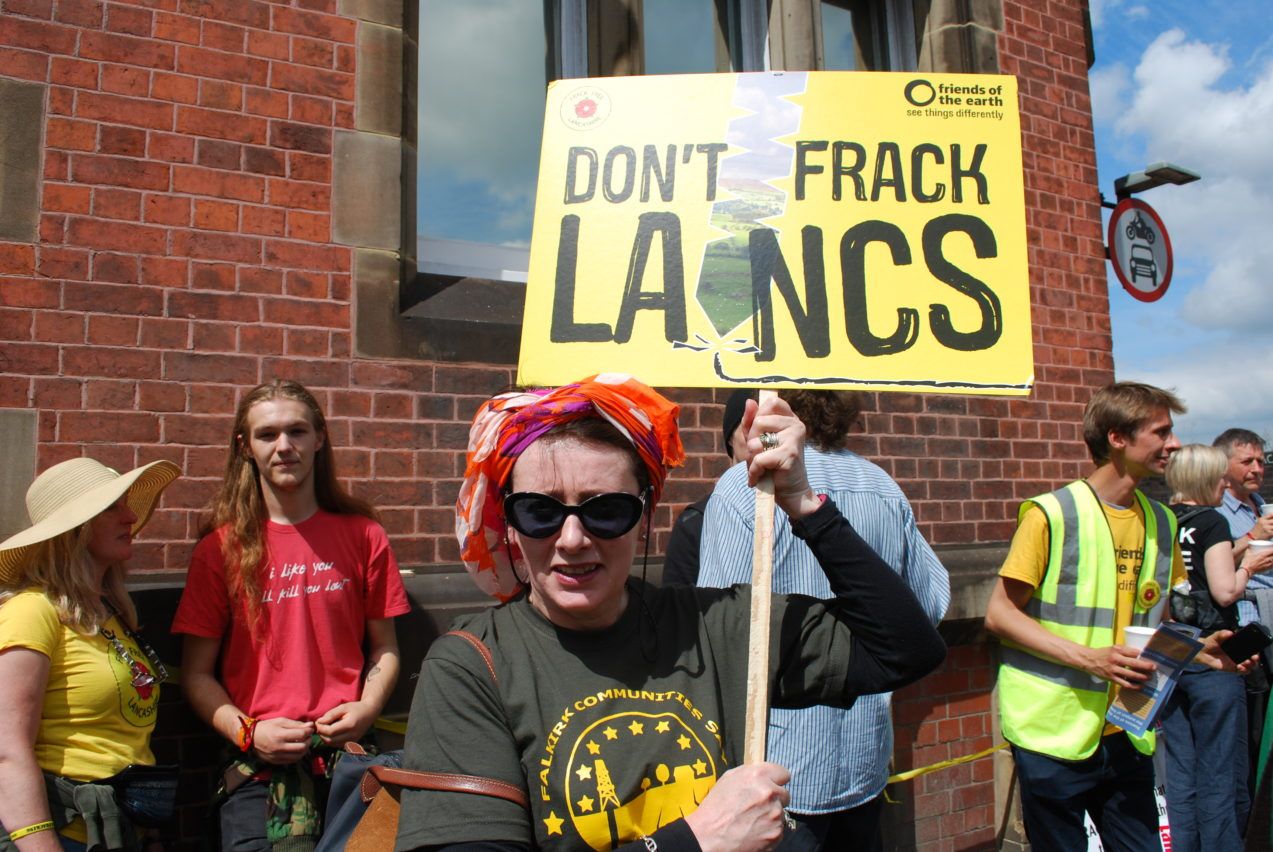 What’s happening with fracking in England?

As the Scottish Government consults on whether or not to allow fracking to go ahead, a look south of the border gives a taste of what may come to pass if Ministers end up allowing the controversial industry to proceed. Theresa May’s government has chosen to stick with its predecessors ‘all out for shale’ approach, in the face of huge opposition from communities on the frontline.  But, despite a supportive government, the industry is meeting with obstacles and resistance every step of the way, and struggling to get underway.

Cuadrilla has been held up in its plans to frack in Lancashire for 6 years, since two  earthquakes were recorded at its Preese Hall test site near Blackpool in 2011. Having been forced to abandon that site, the company subsequently applied for planning permission at two further sites but Lancashire County Council, responding to strong local opposition, refused permission. Appealing to the UK government Cuadrilla managed to get one of the decisions – for fracking at Preston New Road – overturned late last year, while the other site – Roseacre Wood  – is held up in a legal challenge.

SCOTTISH ACTIVISTS IN LANCASHIRE IN 2015.

Meanwhile, Ineos, which made grand claims in July last year of its intent to submit 30 planning applications within 6 months has failed to initiate even one to date. Ineos is at an even earlier stage in proceedings than Cuadrilla, seeking access to land to conduct seismic surveys in order to determine where to drill. It too is being met with local resistance almost wherever it goes and has been accused of bullying, for resorting to legal threats against landowners including the National Trust and the Chatsworth Estate.

Ineos has around 1.2 million acres of license area in England and a picture is beginning to emerge of which parts of its large acreage might be targeted for gas extraction. The local parish council at one site that the company is considering for a planning application in Derbyshire has vowed to fight Ineos’s proposals and predicts a ‘long…political battle.’ Over 300,000 people have signed petitions to protect the home of legendary hero Robin Hood following an investigation by our sister group which revealed parts of Sherwood Forest to be targeted by the company.

THE PETITION AGAINST FRACKING IN SHERWOOD FOREST, SIGNED BY FRIENDS OF THE EARTH AND 38 DEGREES SUPPORTERS (CREDIT: FOE EWNI)

Third Energy, which has permission to frack at Kirby Misperton in North Yorkshire, is not only facing huge local resistance, but has recorded substantial losses in the last two years. It is not the only fracking company facing financial difficulties: IGas has recently announced a restructuring plan following predicted failure to meet its financial obligations; while AJ Lucas – a key Cuadrilla investor – has seen its share prices tumbling.

As Cuadrilla attempts to get underway developing the Preston New Road site, it continues to be met with resistance from local objectors and their supporters around the country.   While legal challenges are pursued through the courts, creative, peaceful protests delay and disrupt the fracking companies plans. Regular activities include slow walking in front of lorries trying to access the site and roadside protests as well as lock-ons, and a recent rally was attended by around a thousand people from around the country.

Given that the fight has been going on for some 6 years already it’s clear that the opposition to fracking has staying power. Even as the state bulldozes over local decision making, communities are finding new ways to win – recently convincing two local suppliers to pull out of contracts to supply Cuadrilla. With the aim of building on this success a national fortnight of action has just been called from 27th March to 10th April by climate activists Reclaim the Power, with plans for a ‘more sustained campaign of resistance’ over the summer if companies go ahead with fracking.

Given the enormous opposition to fracking in Scotland, sustained and expanded over the last 6 years, it’s difficult to envisage the industry getting any easier a ride here should the moratorium be lifted.

Take action now to tell the Government why fracking should never be allowed to go ahead in Scotland.

Find out how you can support the fight against fracking in Lancashire and Yorkshire.