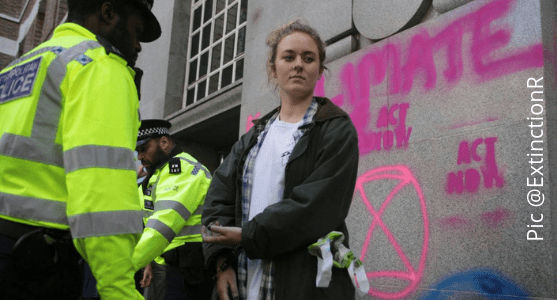 Why are climate activists calling for a rebellion?

Home > Why are climate activists calling for a rebellion?
15th November 2018 By Kate Whitaker

The recent report from the Intergovernmental Panel on Climate Change (IPCC), a team of UN scientists, showed we have less than 12 years to prevent the most catastrophic climate change.

For those who have been engaged in climate campaigning for a while, the contents of the report probably didn’t come as a surprise. We have known about the severity of the climate crisis for decades now, and we know it’s getting worse.

But even for those of us who engage with this information on a daily basis, something about the release of this IPCC report has felt different. Seeing the stark facts laid out in headlines and social media feeds has caused discomfort, unrest and importantly action across Scotland, the UK and the world.

One of the basic tenets of climate change communication is to avoid using fear as a motivator. Human brains actively try to avoid feelings of fear and anxiety because they are uncomfortable. This can lead to apathy and inaction, as ignoring the threat of climate change is an effective way to reduce these unpleasant emotions. Especially as many people have other threats and fears that feel more urgent, like making enough money to feed your family.

A lot of climate change communicators and organisations try to emphasise the positive angles so that people don’t block it out. In fact, even a summary version of IPCC report is watered down to be more palatable to governments.

There is an assumption that we can’t handle the truth about climate change and the threat to our collective future.

What action is needed to tackle climate change?

Groups like Extinction Rebellion are built on the belief that we need to tell the whole truth about the climate crisis, to everyone. They are asking for radical reduction in carbon emissions, aiming for net-zero carbon by 2025 and a citizen’s assembly to make it happen.

Thousands of people are responding to this call and declaring they are willing to go to jail over it. In the last few days groups of activists have blocked roads, glued themselves to the UK Government’s Department for Business, Energy, and Industrial Strategy and Downing Street in solidarity with anti-fracking groups and are planning more action throughout this week and beyond.

“Protesters have been arrested after defacing government buildings &… gluing themselves to… Downing Street.”, @BBCNews.

In a recent talk organised by FoES, climate scientist Professor Kevin Anderson laid out the heartbreaking, terrifying, scientific truth about climate change to a packed lecture hall in Edinburgh.

Another part of climate communication shows us that if people do experience emotions like fear and anxiety about climate change, they need actions to take that are proportional to the threat.

I know that if climate change is actually as scary and immediate as the science shows us it is, then changing my lightbulbs is clearly nowhere near enough.

We are in a situation where the proportionate response to the truth is to rebel, to take action and to demand radical, systemic change to our societies and economies.

A change is coming

In his talk, Kevin Anderson reminded us that runaway climate change inevitably means a devastating, chaotic change to the world we know. Inaction leads us towards extreme weather, mass forced migration, the loss of lands, lives and livelihoods and resulting political and economic crises.

At Friends of the Earth, we believe that a transformation of the current economic system is needed to tackle climate change and the social injustices that reinforce it. This must be led by the power of people demanding a just and fair society, within our ecological means.

We can see this positive progress in the growth of community-owned renewables in Scotland, in hundreds of organisations pulling their money out of fossil fuels companies and people coming together in community centres, universities and meeting rooms across the country to develop collective solutions and campaigns.

Action on climate change could lead to a systemic shift that puts people before profit and makes society fairer and safer for everyone. Action on climate change has the potential to give people warm homes and bring them out of fuel poverty, transition fossil fuel workers into sustainable jobs, improve public transport and support local farmers, to mention a few.

But it requires just that, action.

What can you do?

Not everyone can glue themselves to government buildings, but you can still be an active part of the movement.

To create the systemic change this crisis requires, we need people tackling this problem in every way. That means we need people in the room with politicians, we need a mass of people contacting their representatives to show public support, and we need people ready to disrupt and hold them to account.

We need the people building alternative ways of living and re-imagining our future. We need solidarity across cities, countries and continents that supports people fighting for their homes and families.

In the next 2 minutes, you can email your MSP to demand that Scotland commits to more urgent action to cut climate emissions within this decade.

Email your MSPs now
In the next week you could join a campaign group. Friends of the Earth has local groups across Scotland campaigning on topics from air pollution to plastics. There are also divestment groups, public transport campaigns and many more. Can’t find something in your area? Get in touch and we can see how we can support you to take action!

If you are interested and able to take direct action on climate change, Extinction Rebellion are establishing new groups in several cities across the country and Climate Action Scotland have a mailing list for people interested in taking action in Scotland: climateactionscotlandcontact[@]gmail.com

In Aberdeen? Join us on Sunday 25th November to take action of air pollution and demand clean air! Join the Facebook event