Will there be change in the air after Brexit?

The seismic shocks after the earthquake of the EU referendum are showing no signs of easing, with the UK’s political parties in a mess, and Sturgeon here in Scotland exploring options to deliver on the Scottish people’s mandate to stay in Europe. It’s worth stepping back and reflecting on why people voted to leave the EU. Some leave voters were disenchanted with politics, feeling that politicians did not speak to, or for them. Others were worried that their children will inherit a world which is in worse shape than the one they grew up in. For many, their vote to leave was about taking command of their livelihoods.

The tragic irony is that by leaving the EU, the UK has opened the door to the erosion of fundamental freedoms and legislation which protects our dignity as human beings: laws around human rights, a healthier environment, and workers’ rights.

Where this is most clear to me is in the protections afforded by European air quality laws. 60 years ago, the UK Government passed the Clean Air Act in response to 12,000 people dying in the Great Smog of 1952. In doing so, it successfully curbed levels of smoke from factories and domestic coal fires. But, traffic levels grew from the 1950s onwards, leaving people exposed to unsafe, invisible concentrations of toxic air, killing thousands of us early and making life miserable for many more. Children were suffering the impacts of air pollution the worst, with childhood asthma levels increasing 6-fold between the 1970s to the 1990s.

By the 1990s, Glasgow’s Hope Street had the joint worst

air pollution in the UK, and whilst it thankfully no longer holds that title, it still has illegally high levels of pollution. Some attempts to curb traffic-related air pollution were made in the 1990s through the “Local Air Quality Management” system. But whilst this required action to be taken by Local Councils, there was no binding obligation on any public body to deliver safe air and so not much changed.

It was logical to also tackle our air pollution at the European level; our weather knows no borders, and we export a lot of the air pollution we create at home to Scandinavia, and likewise a lot blows in to Scotland from Western Europe. The European Union enabled countries to sit around a table and figure out how to reduce air pollution across the continent through cooperation and coordinated action. In the 1990s, the first European air quality laws were born and the standards have been strengthened over the years, culminating in the Ambient Air Quality Directive in 2008.

Unlike the domestic Local Air Quality Management system, the delivery of these European air quality limits was binding on states, meaning that we could take our governments to court for failing to protect our health and wellbeing. This is exactly what happened in 2011: a London-based NGO took the UK Government to Court, invoking EU law, for failing to deliver the clean air we deserve across many parts of the UK, including Glasgow. 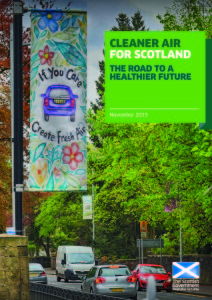 This legal action concentrated Scottish Ministers’ minds and gave us, in 2015, “Cleaner Air for Scotland,” which is a new Scottish action plan to clean up our toxic air. Incidentally, the strongest commitment in that plan is to meet European air quality legislation by 2020, probably because this is the only binding obligation which the Scottish Government has to deliver on if it is to avoid legal action in the future. It was very disappointing that the Scottish Government did not a date to meet its own, non-binding, Scottish Statutory Air Quality targets.

So, what does the future hold? If Scotland finds a way to remain in the EU, it will keep a seat at the table and will be bound by future protections afforded by European environmental legislation. If it exits, thankfully, the protection afforded by the Ambient Air Quality Directive will not disappear overnight. This is thanks to a legal quirk whereby European Directives are transposed into Scots law via domestic acts of parliament, so those domestic laws would still stand post-Brexit. However, leaving the EU would open the door for those laws to be weakened or repealed. There will be forces in society trying to undermine these laws and no doubt they will be spouting the rhetoric that they are simply trying to cut free from the bureaucratic Brussels red tape. Let’s not get sucked in by that rhetoric.

Before the Referendum, Friends of the Earth Scotland was in the remain camp. However it now plays out for Scotland, we will be fighting to keep and build on the environmental protections that Europe has given us.

Take action now by writing to Scotland’s Party Leaders to urge them to protect our environmental progress during Brexit http://act.foe-scotland.org.uk/lobby/brexit-enviro