90 young activists from all corners of Europe to participate in the Young Friends of the Earth Europe Summer Camp in Drouwen, Netherlands. They visited people in Groningen suffering from earthquakes caused by gas extraction nearby.

There were workshops exploring topics such as food sovereignty, non-violent direct action, and intersectionality. In the evenings we had activities such as a scavenger hunt, and an intercultural exchange night, during which we all shared food (and drinks) from our home countries, as well as dancing some traditional dances (including a favourite from last year’s summer camp held in Scotland; the ever-popular ceilidh!). 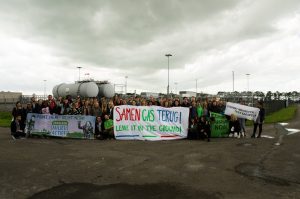 An important part of these events with people from a wide geographical spread is learning about their local environmental struggles. In our host region of Groningen the community are experiencing earthquakes due to gas extraction underneath the ground by the company NAM (Nederlandse Aardolie Maatschappij, jointly owned by Shell and Exxon). The gas extraction began in the 1960s, prior to which the area had no history of seismic activity.

The gas drilling changes the pressure in the gas reservoir and causes compaction of the sandstone in the ground, which is also quite soft. As a result earthquakes started occurring about 25 years ago. While the earthquakes are often of quite low magnitude on the Richter scale (around between 0.1-3.6), because they happen only a couple of kilometres from the surface, they have a large impact above ground. They often cause significant damage, making it unsafe and costly for the residents to continue their lives there. Also, it is possible that an even larger earthquake could still occur, which could have devastating consequences. Because of the earthquakes, the homes of an estimated 100,000 people have been damaged, leading to people having to move or being left feeling unsafe in their own homes.

Farmers Geuko and Aagtje welcomed us to their Groningen home, where they have experienced several earthquakes since 2012. When walking around their farm we could see the damage the earthquakes had brought. We also learnt that NAM were unwilling to research the damage done by the earthquakes (NAM suggested the damage was done by the sun and the wind…). So in order to prove that there is a direct link between earthquakes and the damage to their home the farmers have installed sensors themselves. These sensors have helped them provide sufficient evidence against NAM, who they are now in the process of suing.

I think what has happened to Geuko and Aagtje is an important story to share about struggle for climate justice, and I am grateful they opened their home for us to visit. The extraction and use of fossil fuels puts people’s lives at risk; often beyond the impacts of the carbon dioxide released by their burning.

Frequently, those who are bearing the brunt of fossil fuel extraction are not receiving the profits of the industry. In this case for example, it has been estimated that the Dutch state has earned 250 billion euros (and how much have Shell and Exxon pocketed in that time?) from the gas since the 1960s, while little money has gone toward repairs in the area or supporting the local citizens.

Throughout our time in the Netherlands we also learned that more and more people have heard about these injustices and begun to rise up to demand a just transition away from fossil fuels. Because that is the only real solution – not simply buying fossil fuels from other countries and outsourcing the negative impacts of extraction onto other communities. We must instead get ourselves on a path to a fossil fuel free future where we use renewable energy resources without damaging people or the planet, while also creating good jobs for people.

I hope that Geuko and Aagtje – and many others along with them – will finally get justice they deserve.

“Groningen gas: The costs of not keeping it in the ground” (2017),  report commissioned by Milieudefensie (Friends of the Earth Netherlands)