Young Friends of the Earth Europe get together in Germany

In Europe Young Friends of the Earth has taken off with great success so we saw this as a fantastic opportunity to network with some of the most successful groups and perhaps to benefit from their experience, learn about their successful campaigns and so on.

The meeting was very positive, with representatives from many member groups, such as Norway, England, Wales & Northern Ireland, Germany, Lithuania, Hungary, and the Netherlands to name a few. It was fascinating hearing the successes and strengths of each group and really helped to inspire and motivate which will in turn (hopefully) have beneficial results to the Young Friends of the Earth Scotland group. 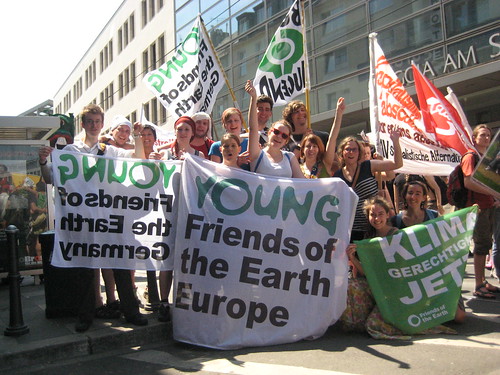 During the meeting we talked over future Europe wide campaigns, which we intend to be involved in over the summer, and made some pretty significant decisions about the future of Young Friends of the Earth Europe and its role within Friends of the Earth Europe. We decided to send representatives to Durban for the UNFCCC (United Nations Framework Convention on Climate Change) and have a sister event which can be more easily attended by member groups simultaneously in Brussels.

our own network and help us to engage with young adults to allow them to make their voices heard on issues that are important to them. One opportunity that I saw was a chance to stand for election into the Steering Group for Young Friends of the Earth Europe – at which I was successful! So

I also have roles in the Climate Justice Working Group, Communications Work Group and Summer Camp 2011 Working Group. I hope that by being so closely involved with the European network it can help strengthen our network.

We are working on some very exciting projects for Young Friends of the Earth Scotland – so watch this space!