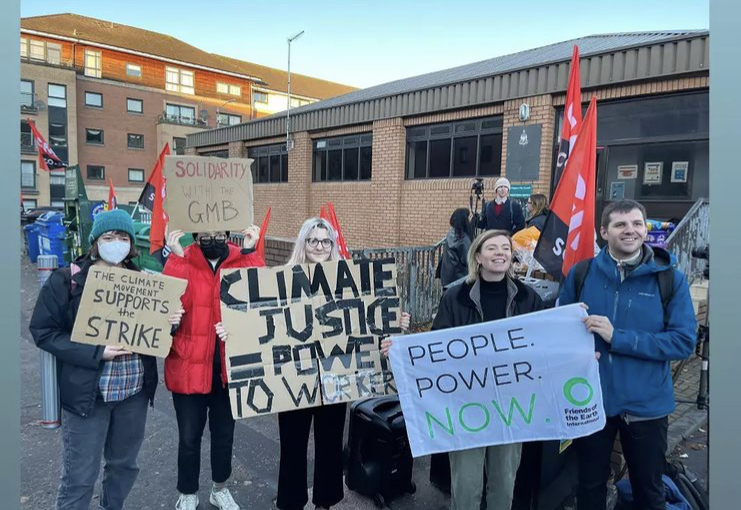 On a Sunday in May, in rooms adorned with banners and bunting, young people from trade unions and the climate movement gathered together for a day exploring climate justice, workers rights, how we can and do work together – and what we can learn from each other. 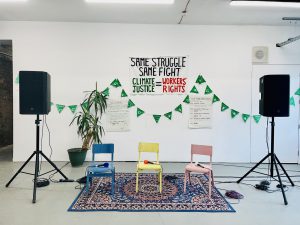 Organised by Young FoE Scotland, Fridays for Future Scotland, Scottish Trades Union Congress’ Youth Committee and the Better Than Zero campaign, the ‘Same Struggle Same Fight’ youth gathering took place in Glasgow after several months of planning. The event built upon ideas and events at COP26 where trade union and climate solidarity was particularly visible. Climate activists joined GMB and RMT members on picket lines over the course of COP, while trade unions marched at the global climate strike on November 5th and the Global Day of Action for Climate justice the next day.

During the youth gathering, we spent the morning exploring climate justice, considering specifically how the climate crisis is a systemic issue which amplifies already existing marginalisations, including those related to class, work, and income inequality. We then heard an introduction to trade unions and how they make change, including a talk from from Abi, the chair of STUC Youth Committee, who shared her experience of getting involved in trade union organising.

We went on to explore case studies relating to workers rights and climate justice, such as the origins of the term ‘Just Transition’ in the American labour movement, and Australia’s Green Bans of the 1970s. 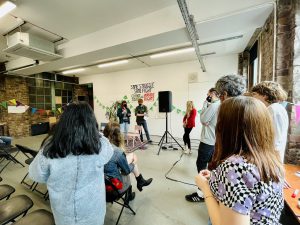 In the afternoon, the Better Than Zero campaign led us in an inspiring workshop about organising within workplaces on climate issues, which also illustrated how workers can be negatively affected by seemingly climate positive actions. It also really highlighted to me the importance of collective action.

The day concluded with a session exploring the challenges to our movements working together, where our struggles overlap, how we can best work together going forward.

Overall, the day really hit home for me that climate justice has to include workers’ rights: capitalism exploits the earth in the same way it exploits workers, and so as trade unionists and climate activists we are fighting the same system.

Highlighting how climate change disproportionately affects people already in vulnerable and precarious positions the world over – including those in precarious employment and poverty in the UK – showed how so many of our struggles are interlinked and our movements can be made stronger through recognising this. 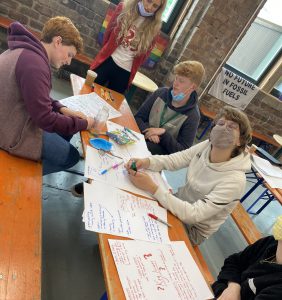 One example we discussed that really stuck with me was the current cost of living and energy crisis, with participants raising how the underlying issues are the same and boil down to placing profit over people and planet. Consequently, we can see how an organised working class and trade union movement is essential for combatting unchecked capitalism. We also realised there isn’t actually a real divide between the climate movement and young workers – we’re often the same people!

A just transition to a better world

I also learned that our solutions to climate issues can have negative effects on communities and workers if not done well. Workers’ rights are particularly important when it comes to industries that need to be wound down to tackle the climate crisis, like the fossil fuel industry. We know from history that the dismantling of the UK’s coal industry in the 80s was brutal. Many mines were closed abruptly, with workers and trade unions ignored. Many parts of the UK are still living with the consequences of this today and have not yet recovered. It’s so important that we do better, with trade unions and workers at the centre of our transition to a society that’s kinder to both planet and people: a Just Transition.

We can build a better world, tackle the climate crisis and embed people power instead of corporate interests– but only by building our movements, connecting climate activists, trade unionists and community campaigners to create an unstoppable force for change. We need to build power to turn demands into transformative change. Only by learning and organising together can we win. And that’s why spaces like the one we organised are so important.

At the end of our day, many participants committed to join a trade union (and you should too if you haven’t!), and plans are also now in the works for a revival of the podcast ‘Decent Jobs on a Living Planet’ – listen out for new episodes towards the end of the year. We have plans for more events like these for young people – so watch this space!

Lucas Sheridan (he/they) is a member of the Young Friends of the Earth Scotland steering group, and is involved in climate campaigning around fossil fuels and accessibility. In their spare time they enjoy music, poetry, and telling their friends to join a union.