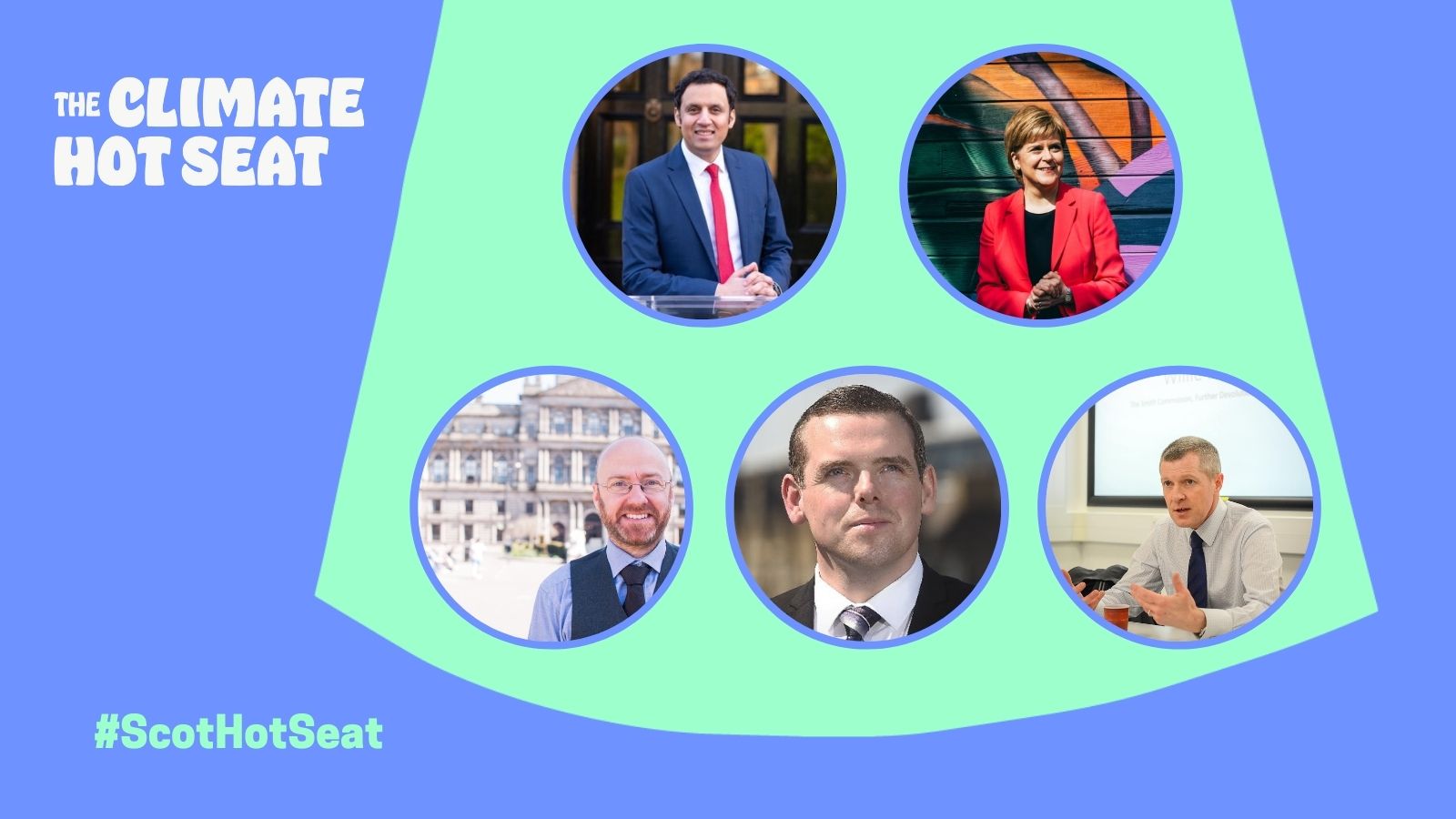 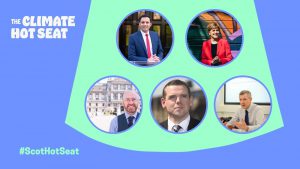 On Friday evening, the Youth Climate Election Debate, known as the Climate Hot Seat took place. It was a chance for young climate activists to grill party leaders on their climate policy and promises, as well as helping young people to make a more informed decision on who they want to vote for in the coming election.

The youth voice on climate has grown hugely over the past few years. We’ve seen mass mobilisations with the climate strikes, and campaigns such as Vote4Climate and Teach the Future are really picking up steam. This election is a crucial opportunity for politicians to engage with us and start making meaningful commitments.

The event was a huge success, securing all five party leaders for the hustings – Douglas Ross, Nicola Sturgeon, Partick Harvie, Willie Rennie and Anas Sarwar of the Conservative, SNP, Green, Liberal Democrats and Labour parties respectively. Climate justice and anti-racist activist Mikaela Loach did an amazing job moderating the event and we got lots of interesting insights, (and a few new promises!) from the party leaders, as well as making them thoroughly uncomfortable.

What did party leaders say?

Party leaders were crucially asked when Scotland should stop producing fossil fuels. SNP, Lib Dems, Labour and Tories all dodged the question with none of them committing to an end date to fossil fuel extraction. SNP emphasised the importance of transitioning to renewables carefully, as to avoid a situation similar to the catastrophe of deindustrialisation.

Labour stressed the need for a Just Transition and stated that the 75% reduction in emissions by 2030 was a “deadline, not our ambition.” Lib Dems and Tories didn’t mention phasing out fossil fuels at all and instead talked of hydrogen projects and electric cars.

The Greens argued they would achieve this through ending subsidies for fossil fuels, ending tax breaks for the industry, stopping the allocation of oil exploration permits and where possible, revoking current or proposed ones. I was hoping for all parties to set out ambitious, detailed and actionable policies to get us off fossil fuels, so I was pleased to hear this.

Next up, all party leaders pledged to ban single use plastics in an unexpected but appreciated move. The practicalities of this and how it will be situated within wider plans for a circular economy remain to be seen, although this is a great step in the right direction.

All party leaders except Douglas Ross of the Conservatives said that climate education needs to be prioritised in Scottish schools and integrated throughout every aspect of the curriculum, with SNP and Greens emphasising the importance of learning practical skills.

Pressure on politicians to listen to young people’s demands

Party leaders congratulated young activists on their hard work setting up the event, and implored them to “knock down our doors,” which many felt was condescending and placed the responsibility on youth activists.

Climate activist Dylan Hamilton (17) made an impassioned speech criticising the party leaders on their empty words. “I want to show you all we are very, very angry. We are trying to knock down your doors. If the comments here tonight have shown us anything, it’s that young people don’t agree that you have done what is necessary either.”

The leaders then scrambled to say that that wasn’t their intention, with Nicola Sturgeon insisting she doesn’t want to “pass the buck” to the younger generations.

I think Dylan’s words perfectly encapsulated the feelings of the young people in the (virtual) room, including myself. We see politicians praising young activists for our passion and hard work all the time, and yet very rarely actually engaging with us or enacting the change we are demanding.

I wasn’t satisfied with the answers they gave to the question on engaging with youth. There were lots of empty platitudes and compliments of youth activists but very little comments on how they intend to work with young people in the future and genuinely listen to us and take the necessary action.

Capitalism as a driving force of climate breakdown

Later on, the Greens thankfully brought up capitalism’s integral role in causing the climate crisis, with Harvie stating “Perpetual economic growth on a finite planet doesn’t work. Eventually the system will crack. We’re seeing that right now. Capitalism is the root cause of the problem… we need to name it.”

Capitalism finally being identified as an issue in a climate debate with politicians was a wonderful first step, and while it’s disappointing to not see similar sentiments brought up by the other parties, it was extremely refreshing to see.

SNP and the Lib Dems did agree that GDP isn’t the be all and end all, with Nicola Sturgeon stating that the SNP want to see “a wellbeing economy.” Patrick Harvie criticised the SNP for their promotion of sustainable growth, noting that GDP is “still at the pinnacle” of our economy and calling sustainable growth “a paradox.”

The Conservatives disagreed that GDP should be decentred in our economic considerations, declaring that the money to pay for the necessary climate action must come from somewhere. Patrick Harvie quickly responded by accusing Douglas Ross of hypocrisy for making a ‘no magic money tree’ argument when his party in Westminster seemed to have “unlimited funds to pay for nuclear warheads and increased military technologies”.

Overall, predictably the promises made by the parties fall way short of what we know is necessary to achieve our climate targets. I found it extremely concerning that all but the Greens could not name an end date for fossil fuel extraction.

Despite this, there were also some positives; the Greens’ plan for phasing out fossil fuels is excellent and should be replicated in the other parties  We heard commitments to ban single-use plastic and integrate climate education into school subjects (with some calling for it to be compulsory) which is a huge win for the Teach The Future campaign!

Moving forward, I would love to see more actionable policies being discussed, a much greater sense of urgency from the party leaders and more ambitious legally binding targets being enacted.

Skye sits on the YFoES Steering Group and has been part of the group which worked to create the Vote4Climate campaign, encouraging young people to register to vote and pledge to vote for the climate.


This site uses cookies to store information on your computer. To find out how we use them please view our Privacy Policy.Accept AllNo Thanks
Manage consent