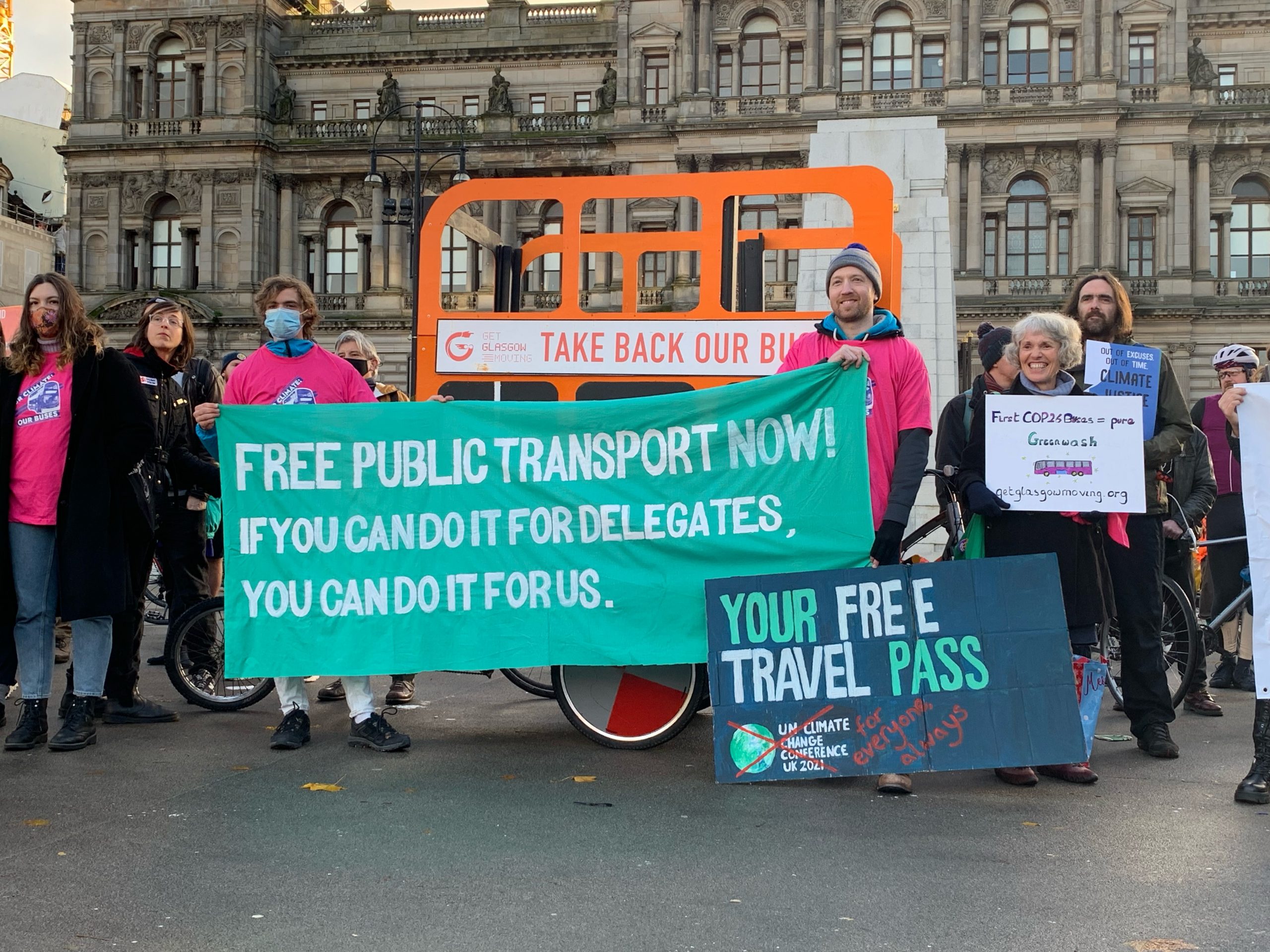 A year of campaigning for transport justice

Transport sits at the heart of climate justice in Scotland – it’s the sector most responsible for climate-wrecking emissions, and it’s also deeply unequal.

Climate justice means recognising that people who’ve done the least to cause the climate crisis are bearing the brunt of it, and those who have done the most are less affected.

These inequalities are often spoken about at a global level, but they can also be found at a local level in our transport system. Wealthy people are more likely to drive private cars, causing climate emissions and air pollution, while those on a lower income are more likely to struggle with the patchy bus service. At the same time, poorer communities are exposed to higher levels of toxic air.

The concept of climate justice is vital to draw on as changes are made to how we get around to reduce our climate impact, and some incredible campaigning has been taking place throughout 2022 doing just that.

The rapid spread of Kidical Mass group cycle rides and school bike buses has been inspiring to see this year. In so many different ways, families and communities are out ahead of local councils and showing them what needs to change. They are seeing the need for safe cycling and taking action to provide it.

Councils are beginning to listen, and we’ve seen announcements to make prominent streets car-free in Glasgow and Inverness.

Making buses accessible for everyone

At the beginning of the year, the Scottish Government brought in free bus travel for under 22s.  This a great start in making public transport a key public service, and will really help young people to access opportunities. We’ve been highlighting the need for it to be rolled out much more widely.

We’ve been supporting local campaigns for more regulation of our buses so that services will be run for the passengers and routes can’t be pulled without warning. Campaigners in Glasgow have been pushing the council and other bodies to use new powers. We’ve been having success but for everyone paying far too much for buses that often don’t turn up, the change is happening far too slowly.

Local communities have been fighting to stop bus cuts across Scotland, with parents in Perthshire saving their vital bus service. They showed what can be achieved by pulling together to create strong public pressure, and will no doubt inspire others who are faced with the same threat.

In the latter half of 2022, we’ve seen increasing numbers of people coming together in their workplaces to take strike action, refuse overtime or walk out during their shifts and we’ve been supporting those fighting for good green jobs. The struggle for decent pay and conditions is an essential part of creating the better world that we know is possible.

Again, these activists are far ahead of their governments. They’ve read all the climate data, the public health evidence; they know that private jets and SUVs have to be restricted if we want a liveable future. We hope to see politicians catching up in 2023.

Next year, we’ll be working across Scotland, pushing councils to take ambitious action. We’re excited to see these movements continue to grow, and as they do so, policy-makers will be forced to listen.

If you’ve got a local campaign we can help with, or you want to hear more about any issues here, get in touch with me gthomson@foe.scot. You can also follow some of the campaigns we support and get involved.

Pushing for better buses in Glasgow
Calling for cycling infrastructure in Perth
Taking action for safer streets in Inverness
Join Friends of the Earth Scotland
This site uses cookies to store information on your computer. To find out how we use them please view our Privacy Policy.Accept AllNo Thanks
Manage consent