Home Blog After Cambo decison, workers and communities must steer the transition away from fossil fuels

After Cambo decison, workers and communities must steer the transition away from fossil fuels

Both governments must scale up renewable jobs and provide certainty for workers currently left at the whims of big fossil fuel companies.

The decision by Shell to pull out of the Cambo oil field should deal a fatal blow to the
controversial project but it must also raise questions about what comes next.

Climate science is clear that there can be no new oil and gas fields anywhere in the world if we’re to keep warming below the 1.5ºC limit all nations reaffirmed their commitment to at COP26.

But as the world moves away from fossil fuels, the Scottish and UK Governments must step up action to rapidly increase renewables and protect the 25,000 workers directly employed in the oil and gas industry.

Make no mistake, Shell are leaving because of the public and political opposition to the project. The concerted campaigning has made Cambo an iconic fight for a movement that knows new fossil fuels anywhere are a threat to people everywhere.

But that campaign energy must now be directed at both governments to ensure that they are building a post-fossil fuel economy that is fair to workers and communities.

Action must be taken to speed the shift away from fossil fuels. It is also critical that governments rapidly scale up renewable jobs and provide certainty for workers currently left at the whims of the big fossil fuel companies. We know that up to 3 decent green jobs can be created for every oil and gas job. 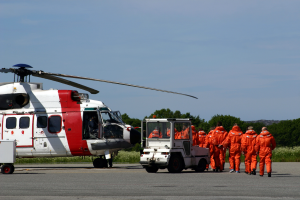 Our research with North Sea oil and gas workers has already highlighted the experiences of those people working in a precarious and declining industry.  Workers said they were willing to retrain and adapt to what must come next, but reported barriers in doing so. Re-training programmes should honour their lifelong labour commitment and ensure their skills and experience are retained in our new energy sector.

Ideas like an offshore training passport would allow workers to move more easily between offshore fossil fuels and offshore wind. The current training system is a costly bureaucracy where workers are being asked to pay to repeat qualifications that are still in date or to duplicate courses when looking for work in offshore renewables.

Far more must also be done to ensure that renewables projects located in Scotland actually create jobs throughout the domestic supply chain. Ensuring that platforms are brought into Scottish ports to be dismantled and recycled can also be another significant source of long-term work.

Trade unions estimated that during the first nine months of the pandemic 12,000 offshore workers in the UK lost their jobs. It won’t surprise you to hear that oil company shareholders still got paid over $36 billion in dividends in 2021.  These flighty multinational corporations are profit-driven machines that do not care about individual workers and should not be dictating the terms of the transition.

People who work in this industry and live in these communities know best what they need from the transition away from fossil fuels and they must be driving this process. A coherent transition plan must see governments heed these people and not the demands of the fossil fuel lobbyists.

A version of this article appeared in The Herald on Friday 10 December.