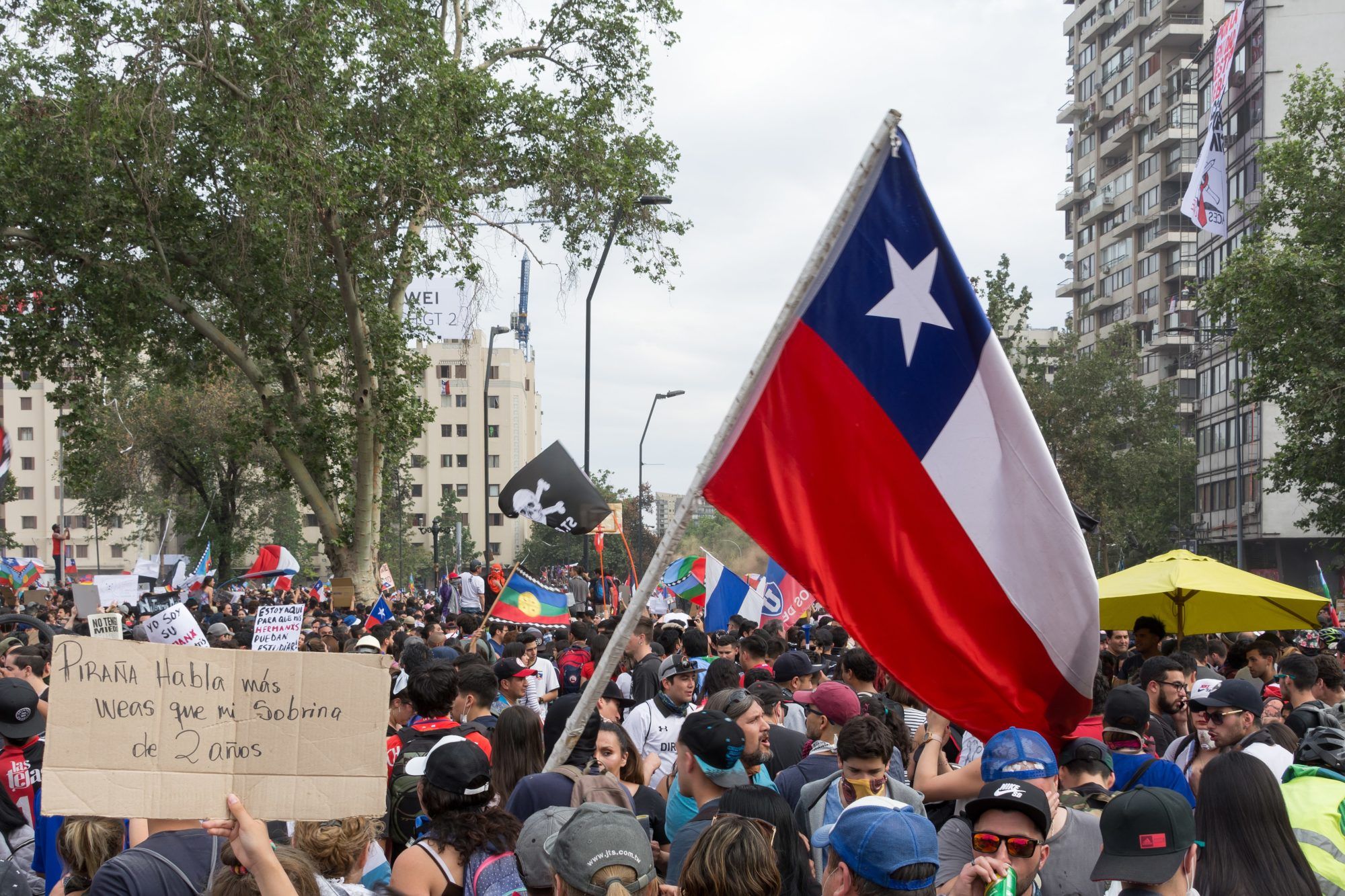 This week, as huge numbers of protesters are taking to the streets in Chile, we were joined in Glasgow by Lucio Cuenca, a Chilean environmental defender and Director of the Observatory for Environmental Conflicts in Latin America.

Lucio had planned to come to the UK long before the current wave of protests took off across Chile. He was visiting the UK as part of a series of events with War on Want and the London Mining Network focused on exposing the destructive practices that UK based mega-mining corporations like BHP are causing in Latin America. In Glasgow, Lucio spoke to councillors, NGOs and activist groups about the unrest in Chile and how it relates to inequality, corporate power and environmental injustice.

BHP is one of the corporations most responsible for the climate crisis. However, they are now claiming to be a leader in tackling the climate emergency and are using this to justify the expansion of its mining for lithium, copper and rare earth minerals, which they claim are necessary to fuel the global transition to renewables. Just a few days ago at the company’s Annual General Meeting, BHP boss Andrew MacKenzie, stated that “mining can help the world go green”.

Lucio said that: “These claims are deceptively simplistic, the reality is that infrastructure and construction materials are projected to remain the primary drivers of copper demand throughout this century, not renewable energy technologies. This greenwashing narrative also poses a new threat to mining-affected communities as mining companies introduce a false sense of conflict between the defence of local territories and the material demands of the transition away from fossil fuels.”

He called for campaigners in the Global North to consider this in our campaigns for a Just Transition for workers and communities by switching to renewable energy and renewable jobs. We must ensure that this does not simply enable greater destruction and exploitation of communities in the Global South.

Parts of Chile ‘turning to desert’ in worst drought in 60 years https://t.co/9CA4RO7oO3

BHP continues to extract vast amounts of water at their Escondida copper mine in Antofagasta, Chile, while the country experiences severe drought. Lucio told us that this mine uses more water than a city of 5 million people.

BHP have also continually forced the displacement of communities surrounding the Cerrejón opencast coal mine in northern Colombia. Nor is there justice for the 19 people killed during the Samarco mining waste dam disaster in 2015 that destroyed the village of Bento Rodrigues in Minas Gerais, Brazil.

The mega-drought and exploitation of Chile’s natural resources by foreign companies like BHP and Rio Tinto are major causes of the current unrest in Chile, which has resulted in the government imposing a state of emergency and a military crackdown that has caused several deaths.

Scottish pension holders own these companies

Many of these corporations hold headquarters in the UK, with BHP being listed on the London Stock Exchange, and we have to face up to how we prop up their destructive actions in Latin America.

Lucio Cuenca said: “It is unacceptable that Scottish councillors’ and MSPs’ pension funds are invested in BHP, a company that are major contributors to the climate crisis and are causing massive destruction to communities in Latin America through mega-mining projects.

“BHP has a very aggressive strategy to insert itself in the territories of these communities, over-exploiting local water sources causing major droughts and trying to eliminate any critical opinion or social protest. They are trying to re-legitimize themselves through a narrative about taking action on the climate crisis, which they are using to justify expanding metal mining and causing more crises for the people living there but it is a complete contradiction.”

Part of Lucio’s visit to Glasgow included meeting with local activists and organisers. He is one of the coordinators of the Cumbre de los Pueblos, (the Peoples’ Summit), an alternative space taking place outside UN Climate Conference (COP25) in Chile this December organised by 160 Chilean organisations including indigenous groups, feminist groups and trade unions. The summit will be a space for dialogue and discussion, between these organisations and people from across the world who will be in Santiago for the Climate Conference.

Lucio explained that this format had been chosen for the Peoples’ Summit because of the need to have an international dialogue about the real causes and solutions to the climate crisis and wider injustices of the neoliberal economic system that are being felt so strongly right now in Chile.

Organisers in Scotland and the rest of the UK need to be paying attention to these conversations led by those in the Global South and ensuring that they shape our work and thinking in the run up to next year’s Climate Conference in Glasgow (COP26).

The Chilean Government has cancelled the COP and it will now take place in Madrid, Spain. The People’s Summit will go ahead as planned.

FoES stands in solidarity with the Chileans and we endorse the People’s Summit in Chile during COP25 in calling for climate justice. We are asking for donations to support the organising of the People’s Summit, including the expenses for some of the speakers from areas in the Global South to attend.