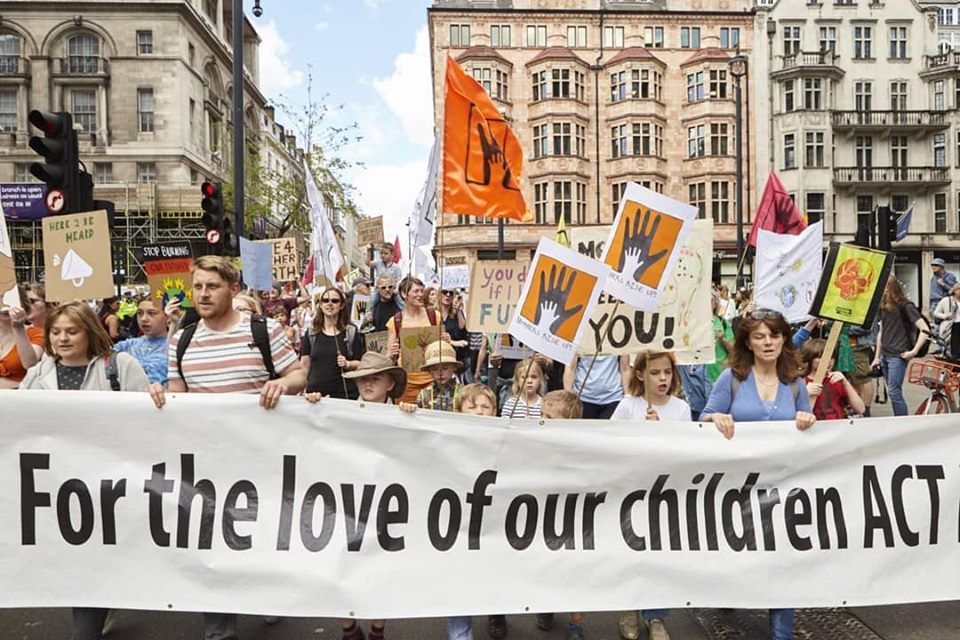 Elizabeth Cripps is a climate justice researcher at the University of Edinburgh, a mother of two, and co-organiser of Edinburgh Mothers Rise Up. On Saturday 31st August, they will unfurl a banner demanding climate action outside St Giles Cathedral on the Royal Mile, Edinburgh.

On Saturday I’ll be on Edinburgh’s Royal Mile with dozens of other parents to demand climate justice for our children. This is why.

Climate change is the biggest threat facing our children. According to the world’s best climate scientists, we have just 11 years left to stave off a future of disease, extreme weather, and food and water shortages.

As a researcher, I know what to call this: an unprecedented intergenerational injustice. As a mum, I’m terrified. I hold my little girls and wonder what the world will be like when they reach my age. Will they have enough to eat and drink? Will they face malaria or war? Will they get to enjoy this incredible experience they are giving me – of being a parent – or will they be too scarred by environmental devastation to have any children of their own? What will all this do to their mental health?

These aren’t the kinds of questions I want to be asking. I wish I could stick to worrying about whether my kids eat enough vegetables or how many episodes of Paw Patrol is too many. Unfortunately, I don’t have any choice.

What about our children’s future?

The Amazon is burning. The same governments who declare this an international crisis continue to subsidise fossil fuels. Reallocating just 10-30 per cent of that $372bn (£303bn) could kickstart a clean energy transition, according to a new report by the International Institute for Sustainable Development. In Scotland, the government has declared a climate emergency but continues to support drilling for North Sea oil. Young women in the BirthStrike movement are so alarmed by the ecological crisis that they won’t have any kids of their own.

Parents love their children. We want the best for them. More than that: we owe it to keep them safe, to bring them up with a good chance of a good life. So we feed them, shelter them and teach them how to care for themselves. We educate them. We help them to be kind. We know that we’ll have to turn them out into the grown-up world all too soon, and we want them to be ready. That’s a lot. But right now, it isn’t enough. If we want to protect our kids, we have to be activists too.

Young people are leading the way

Teenagers have shown us the way with the Fridays For Future movement. Over the past year, they have shown maturity, courage, and a set of priorities their elders would do well to learn from. They have responded to entrenched injustice with persistent, peaceful demands for action, grounded in the most reliable science available. They appreciate, as we should, that the threat is real for all children but worst for those in the more vulnerable parts of the world that have done least to cause climate change. Sixteen year-old Greta Thunberg has taken world leaders to task, and stayed focused in the face of a torrent of abuse.

These children shouldn’t have to do this. They shouldn’t have to miss out on their education to fight for a planet worth living in. If politicians had done their jobs, if my generation and my parents’ generation had acted when scientists sounded the first siren on climate change, they wouldn’t need to. The first IPCC report came out in 1990, years before these inspiring young people were even born. As parents, the least we can do now is show them that we have their back.

The Holyrood government proposes a target of net zero greenhouse gas emissions by 2045, Westminster by 2050. Environmental NGOs, drawing on the science, say this is too late. The UK Government’s own advisors, the Committee on Climate Change, say it’s not doing enough to meet even these targets.

Together we must act now

Most school strikers are too young to vote. In Edinburgh they’ve just had their political voice cut further by being granted only one authorised absence a year for climate protests. My own daughters are too young even to go out and strike on their own. By the time they are teenagers, it may be too late. But as parents – as citizens, as voters, as consumers – we already have a powerful voice. We can and should use it.

A global climate strike is planned for 20-27 September. Youth activists are asking adults to stand up for future generations and demand a just transition to a sustainable world. The Mothers Rise Up banner is touring UK cities in the 11 weeks running up to the strike, symbolising the 11 years left to avert dangerous climate change. We’ll be in Edinburgh on Saturday with a clear message from parents to governments: For the love of our children, act now.

The Edinburgh Mothers Rise Up Banner Event is outside St Giles Cathedral on the Royal Mile at 12 noon on Saturday 31 August. View the Facebook event