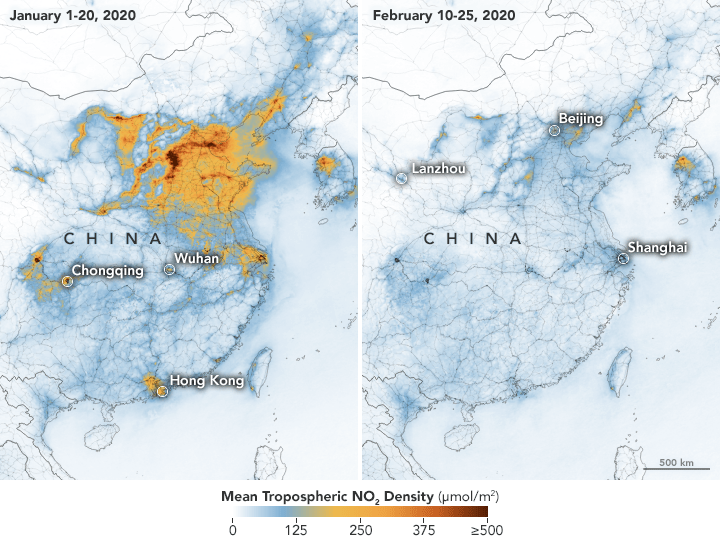 Coronavirus and the climate

Home > Coronavirus and the climate
31st March 2020 By Richard Dixon

You will have seen news stories about how the global coronavirus lockdown has shut factories and massively cut traffic levels. Chinese carbon emissions were 25% lower than the same time last year. Air pollution from coal burning and traffic was down 10-30% over much of China.

This has led some people to say coronavirus is a good thing for the environment. There are several reasons why they are wrong. At least in the short term.

Firstly, no-one could in any way justify the unprecedented disruption to the whole of human society and deaths on a mass scale as a way to reduce climate emissions. Reducing emissions regardless of the human cost is an indefensible eco-fascist approach.

In the recession of 2008-9 people lost jobs and firms shut down so there was less traffic on the roads, and carbon emissions from transport fell for the first time in decades, but at a terrible cost to society. Margaret Thatcher’s ideological destruction of the deep coal-mining industry was pretty good for reducing emissions but disastrous for the communities in coal mining areas.

A just approach to cutting emissions

To really tackle climate change we need a climate justice approach, where social justice advances at the same time as we reduce emissions. To survive the climate crisis, the North Sea oil industry has to go, but we’re campaigning with the unions for a managed and just transition which protects workers and communities.

Secondly, the coronavirus outbreak could derail action on climate change, including the possibility of the postponement or even cancellation of the UN climate talks in Glasgow, scheduled for November. By then we might all be getting back to normality but right now negotiators should be preparing the ground for the vital agreements that need to be made at those talks. Instead, governments across the globe are busy dealing with the virus. It could be a re-run of the disastrous Copenhagen talks in 2009 when the global financial crisis meant that almost none of the serious preparatory work had been done to set things up for the global climate deal that was supposed to be agreed.

Pollution falls are only temporary

Thirdly, any reduction in emissions just now will be only a temporary reprieve and indeed the factories and the power stations that are sitting idle right now could be run harder than ever as economies try to get back to where they were before the virus, creating a surge in emissions.

Any lasting impact of COVID-19 will not be that there was a reduction in emissions in 2020 but that our collective view of the world and how it works will have changed. Governments have found trillions to throw at the problem, the magic money tree really did exist after all. No government will be able to get away with saying that they’d love to do something about climate change but there just isn’t the money right now.

Many people will think differently about flying, holidaying abroad and the market economy. And about how dependent we are on other countries even for basic food stuffs. For some people their rude introduction to working from home will have been a revelation, and they will never want to go back to 9-to-5 office working.

COVID-19 is a disaster for humanity. There is no silver lining in the temporary climate emissions reductions that have resulted. But the long-term lesson for tackling the climate crisis might just be that we know much more clearly that the market doesn’t care about people, that community really is important and that governments can act much more strongly and decisively than they usually pretend they can.

Dr Richard Dixon is Director of Friends of the Earth Scotland. A version of this article appeared in The Scotsman on Tuesday 31 March 2020.

Watch our recent online webinar which looked at the links between our work on climate change, the coronavirus pandemic and taking a justice approach to tackling these crises.