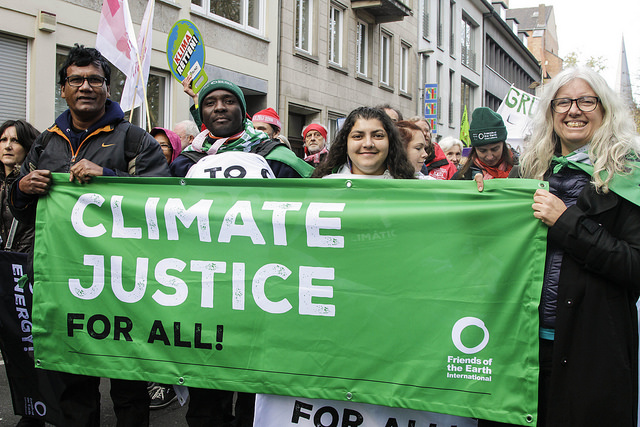 The annual UN climate talks (COP24)  got underway in Katowice, Poland yesterday as negotiators return to the table for what is expected to be a gruelling two weeks. Little progress has been made during negotiating sessions earlier in the year on the key issues at stake, and divisions between developed and developing countries on these remain strong.

But what makes this year’s talks different is that they open in the context of the stark warning issued by the IPCC’s recent Special Report on 1.5oC of Global Warming: that we have a mere 12 years to make the deep, systemic changes required to avoid even more catastrophic warming.

Pledges put forward by countries so far under the Paris Agreement put us on a pathway to 3oC warming by the end of the century, yet the havoc and devastation caused by only 1oC of warming, across rich and poor countries alike, has been all too evident this summer.

This demonstrates why the countries who have benefitted most from the activities that have brought the climate to the brink must shift from their entrenched positions and work out equitable solutions to the crisis – our very survival as a species is at stake.

Equity – the idea that countries must do their fair share of efforts to tackle climate change – is enshrined at the heart of the Paris Agreement and the UN Framework Convention on Climate Change, and clearly must be taken forward into the implementation of the treaty. Yet many wealthy countries – in part influenced by the desire to accommodate the US and prevent them from actually pulling out of the Paris Agreement – are seeking to erode this principle in Katowice.

What equity means in the context of these talks is that the guidelines on how to implement the Paris Agreement (the Paris Rulebook) and the processes designed to ratchet up ambition at the national level (the Talanoa Dialogue and the Global Stocktake) must not be limited to simply cutting climate emissions.

They must also include provision of finance and technology transfer which is key to ensuring that developing countries can both adapt to the impacts of climate change and mitigate emissions while meeting development goals. Loss and damage – what happens when countries can no longer adapt to the impacts of climate change – is an increasingly important element in this as the numbers of climate-displaced peoples worldwide steadily increases.

Crucially, equity requires that historical polluters cut emissions faster, with massive reductions required over the course of the next decade. Which brings the focus back home to Scotland.

How can Scotland show climate leadership?

Scotland is particularly well placed to step up to this challenge and show real climate leadership as a small country with a big carbon debt and abundant renewable energy resources. Indeed, Scotland was the first country to commit to new domestic climate legislation to implement the Paris Agreement.

However, the draft bill currently before Parliament falls far too short of our fair share of the global response to the crisis.

It is encouraging that First Minister Nicola Sturgeon will attend the talks on 4 December at the invitation of UNFCCC Secretary Patricia Espinoza, on the basis of Scotland’s record on climate change. But the reality is that the bar for climate leadership on the world stage is set frighteningly low. True climate leadership that would show the way to limiting warming to 1.5ºC requires:

These are key elements of the People’s Demands for Climate Justice that we at Friends of the Earth amongst many other organisations and movements are advocating here at COP24.

We can hope that the First Minister will leave COP24 with a renewed sense of commitment to delivering on the Paris Agreement. Having already made a decent start on some aspects of the People’s Demands – with a position of no support for fracking, a soon to be launched Just Transition Commission and commitment to a publically owned energy company – she might find that the rest of them make perfect sense too.

Mary Church, FoES Head of Campaigns, and Caroline Rance, FoES climate campaigner, are in Poland for the two weeks of the talks with Friends of the Earth International colleagues from around the world.