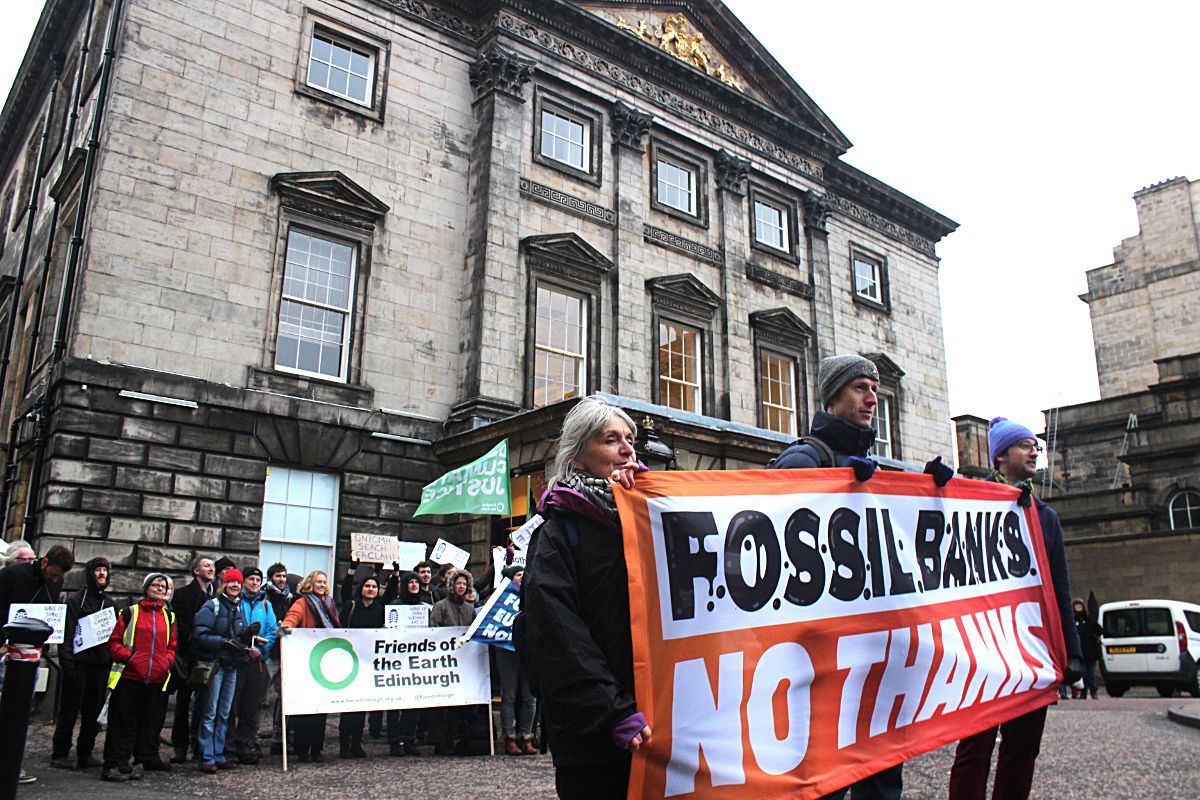 Why we’re chanting ‘Fossil Banks No Thanks!’

Home > Why we’re chanting ‘Fossil Banks No Thanks!’
8th December 2018 By Ric Lander

A decade on from the financial crisis and big banks are still casting a long shadow over our society.

Hundreds of high-street branches have been shut, banks are still paying out huge fines for their criminal activity, and senior voices are predicting a second financial crisis. Scotland’s largest bank, RBS, remains 62% owned by the UK Government.

Beyond all this RBS has more to answer for. Millions of tonnes of the greenhouse gases driving climate change have been unlocked by their activity.

The Oil and Gas Bank

RBS claimed to be involved in financing North Sea oil and gas extraction “since the beginning”. In the 2000s the Bank promoted itself as “The Oil and Gas Bank”. By the time it was bailed out by the UK Government RBS was participating in over $10 billion of loans per year to fossil fuels.

At its peak we estimated that greenhouse gas emissions attributable to RBS lending were greater than the whole of Scotland’s.

“If carbon dioxide molecules had corporate tags of responsibility, the atmosphere would be full of RBS logos mingling with those of BP, Exxon and Shell.”

– The Oil and Gas Bank report by Platform and Friends of the Earth Scotland, 2007

Since this time RBS, in-line with deep cuts to its foreign operations, has reduced its fossil fuel lending. They gave their full backing to the Paris Climate Agreement and adopted policies to exclude most lending to the worst forms of fossil fuels, including tar sands and Arctic oil. Their stance on lending to extreme fossil fuels puts it ahead of other UK banks.

These are steps in the right direction, but the world needs RBS to look farther and move faster.

RBS still says they will still lend to new oil and gas extraction projects, and whilst coal lending has dramatically reduced there is no commitment to phase it out completely. According to their website the bank still invests around £2.2 billion in oil and gas companies.

Such a move would be hugely significant to the future safety of our climate. Other UK banks like HSBC and Barclays are major fossil fuel lenders and leadership from RBS could pave the way a market-wide shift.

Fossil Banks: No Thanks

Friends of the Earth Scotland is proud to be part of launching a European-wide campaign for big banks to kick their fossil fuel habit: Fossil Banks No Thanks.

We call on banks to follow the example of major pension funds like New York City and the nation of Ireland in phasing out fossil fuel investments.

We launched our demand ‘Fossil Banks No Thanks’ in St. Andrews Square, Edinburgh, the historic heart of Scotland’s banking industry. We have written a joint-letter to RBS demanding action. To protect our climate we all need a fossil-free RBS.