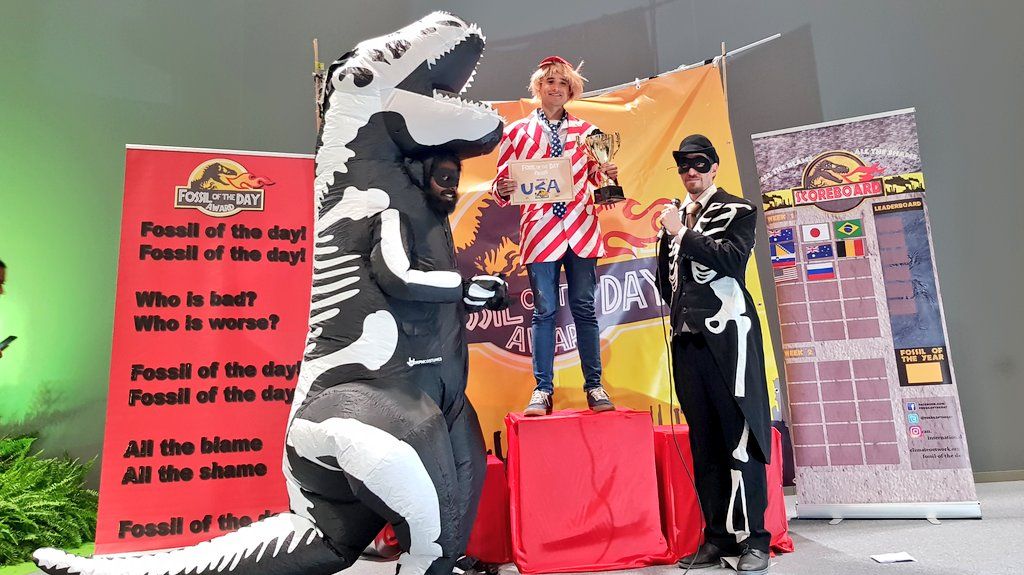 Fossil of the Day

Home > Fossil of the Day
10th December 2019 By Richard Dixon

One of the bright spots in the hard slog of the annual UN climate conferences is the ceremony to announce the Fossil of the Day awards. These awards are organised by a network of 1300 non-government groups and have been presented at every one of the climate conferences for 20 years.

The awards are given to countries or groups of countries which have been particularly obstructive or disingenuous in the climate negotiations. The US has been a recipient many, many times.

In the rarefied atmosphere of the climate talks the Fossil of the Day awards are a simple, clear and somewhat humorous message that is popular with the media and delegates alike. There are costumes, flags, skits and a regular appearance by a dinosaur. With journalists looking to justify having been sent to some far-away place they provide great copy if their home country gets a mention.

1st 🇺🇸🇷🇺 US & Russia for pushing for weak #LossandDamage outcome

Special mention:
🇯🇵Japan and 🇦🇺 Australia for focusing on insurance

But they have a serious purpose and can pile the pressure on countries to behave better. Getting a Fossil of the Day can spark a flurry of communications between capitals and their negotiators, as they try to work out how not to get another one. It is often said the Japanese government is particularly sensitive to being shamed like this at an international meeting. It is possible that the current US administration think winning a Fossil of the Day is a sign of success.

Occasionally there is a Ray of the Day award – for ray of sunshine – for a country which has done something particularly positive. Not surprisingly, Rays are much rarer than Fossils.

In the first week of the current climate conference in Madrid the top recipients of a Fossil have been Australia with three awards, the United States with two, including the special one for worst participant of the week, and Japan with two.

The US won jointly with Russia for trying to weaken rules for giving financial support to vulnerable communities which are hit hard by climate change. These so-called ‘Loss and Damage’ rules go beyond just trying to help countries to adapt to climate change but would instead recognise that some things are already irrevocably lost and many more will be, and that the big polluters should help out. Australia and Japan also got a dishonourable mention for pushing the idea that communities among the poorest in the world should be taking out insurance against climate damage.

Brazil won a Fossil for the new government’s policies which have seen deforestation levels in the Amazon return to level not seen since the 1980s. Japan won one for refusing to even consider phasing out coal burning. Slovenia won one for planning to finance more coal burning in Bosnia & Herzegovina. Belgium won one for being far off track on meeting climate targets.

As unprecedented disastrous fires burn across Australia, the country was given a Fossil for their Prime Minister’s denial that there was any connection to climate change and that doing more on climate change would make no difference. Despite Australia being the world’s third largest fossil fuel exporter.

Paradoxically, Australia have also won a Ray of the Day, along with a groups of other countries, for working to include Human Rights in the discussions of (potentially disastrous) carbon markets.

In the often baffling, always frustrating and sometimes hopeful atmosphere of the UN climate talks, the Fossil of the Day places the blame squarely where it belongs and the Ray of the Day give credit where it is due. Both fun and serious, the Fossils are an important weapon in holding countries to account for what they do on climate change.

Dr Richard Dixon is Director of Friends of the Earth Scotland. a version of this article appeared in The Scotsman on Tuesday 10 December 2019.