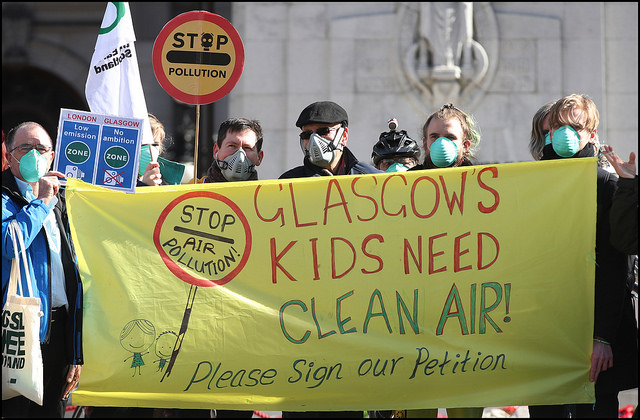 Glasgow Councillors this week progressed their Low Emission Zone plans that have been dubbed a ‘No Ambition Zone’.

Environmental campaigners had criticised the plans as being likely to condemn the city to illegal pollution levels for years to come. Protesters concerned about public health impacts of toxic traffic fumes staged a ‘die-in’ before the meeting of the Council’s Environment Committee.

What happened at the meeting?

Overall, these decisions means the people of Glasgow will be exposed to illegal levels of dirty air for years to come.

However, there were some improvements that came from the meeting. This is thanks to an amendment tabled by Labour and supported by Green and Conservative Councillors voting together:

However, the big disappointment was that Councillors failed to quicken the phase out of dirty buses in the city. Current plans will see only 1 in 5 buses have to meet cleaner standards next year. This will condemn Glasgow City Council to have illegal levels of air pollution after 2020, which is the Scottish Government’s target date for compliance with air quality standards.

Councillors at the meeting did not seem to understand that there was enough public money to give to the bus sector to go further. We’ll be pressing the Scottish Government to urgent clarify that the £10.8m they have allocated to LEZs in this year’s budget can go towards bus upgrades. This could see up to 700 buses – 70-100% of buses running through the city centre – transformed to clean standards.

The Council’s proposals also failed to provide a clear timeline for when exactly dirty cars, vans and lorries would be included in the LEZ scheme restrictions. The amendment suggests that they could be included by April 2021, but with ambiguous ‘sunset’ and ‘exemption’ clauses it is not clear when the end of dirty vehicles in Glasgow will come.

The LEZ proposal will now move to the City Administration Committee for final approval. We will be challenging Councillors to improve the bus phase out timetable at that Committee.

These current plans for buses are so weak that they do not even intend to exhaust the £10.8m pot of money the Government has made available for creating LEZs this year. There is no sense of urgency at all in the proposals. A more ambitious plan would encourage bus companies to use the public money provided to upgrade their fleet and bring cleaner air to Scotland’s biggest city.

We want buses to be part of the solution to air pollution, and they could be if the Council aimed to have low emission buses in the city centre in the next year.

This matters to all of us

This isn’t just a decision that affects Glasgow, setting high standards here would encourage Edinburgh, Aberdeen and Dundee to follow suit as they plan their own Zones in coming years. That’s part of the reason hundreds of people across Scotland have been emailing Councillors urging them to aim higher.

Getting these plans right really is a matter of life and death, because 300 people in Glasgow die early from air pollution every year. Glasgow City Council is now eight years behind a legal deadline to have clean air, so a half-baked LEZ is not what is needed. The city needs an ambitious, well planned Low Emission Zone that will transform the city’s air and improve lives as quickly as possible.

*** We updated this blog on Thursday 22nd March after we were able to access a copy of the amended amendment that was passed by councillors on the day.
Our original blog was significantly gloomier. But we were pleased to learn that the timetable for vans, cars, lorries and taxis has been accelerated, that enforcement mechanisms against the buses were tightened, and that road user charging was put squarely on the agenda. ***

Check out all the photos from the protests below 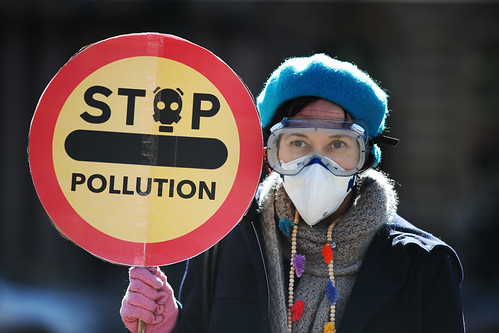