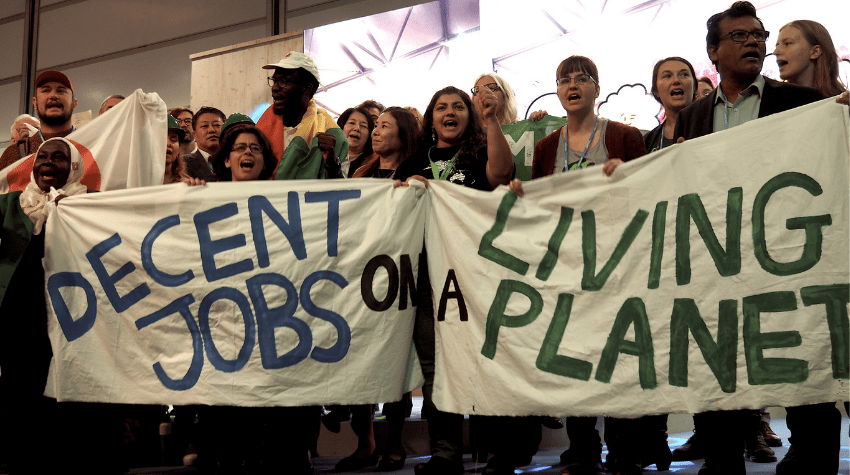 Green jobs: for justice, and the planet

I’m Ryan, and I recently started working at Friends of the Earth Scotland in a new role as Just Transition Campaigner. If we’re to tackle the climate emergency, we need to move to a fossil free economy quickly but this shouldn’t mean leaving behind workers and communities currently dependent on high carbon industries.

Our future clean energy economy should be built with workers, trade unions and communities at the heart, putting people and planet before oil companies’ profits. This campaign means a huge amount to me, I grew up in Paisley and Middlesbrough where the collapse in industries like textiles and steel hurts communities to this day. I don’t want to see this repeated in the North East of Scotland.  A truly Just Transition would put workers, trade unions and communities at the centre of plans to rapidly move away from our worst emitting industries towards decent, well paid work in clean energies. 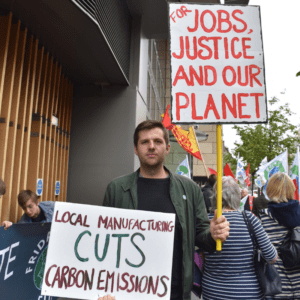 Moving from a fossil fuelled economy to clean energy

There are 5.7 billion barrels of oil and gas in existing fields in the UK which, if extracted, would take us over our share in relation to global climate commitments. Despite this, and as our governments declare climate emergencies, industry and government want to extract every last drop out of the North Sea – aiming for nearly 20 billion barrels. The longer the government tries to maximise extraction, the worse the climate crisis we face while the less time they leave to plan a transition away from dirty fossil fuels in a fair way.

Climate leadership means ending exploration for new oil and gas sites immediately, phasing out extraction from existing sites as soon as possible and building for a fossil free future today. For too long government has spent huge amounts of public money subsidising the profits of oil and gas companies, despite increasingly insecure work in the industry. We need to redirect those subsidies towards funding a Just Transition, enabling a rapid building of clean energy industry in a way that guarantees comparable, skilled jobs for those current working in oil and gas.

A recent report we co-authored has shown there is a huge opportunity in the move to clean energies if the government is prepared to support them. We can meet our international climate goals while building a bigger, better skilled workforce with domestic manufacturing, creating three times as many jobs than those at risk from ending dirty fossil fuel extraction.

With your help, we can win this campaign

Over the next few months we’ll be pushing the Scottish Government to end its support for oil and gas expansion and instead focus on building the clean energy economy. With our trade union allies we are calling for the Just Transition Commission to be given the powers it needs to oversee a transition from a high to zero carbon economy in the coming decades, while recommending where we can move faster, where job opportunities are and ensuring workers and communities are protected.

We’ll be demanding the Scottish Government revise its economic strategy to ensure that it is focused on responding to the climate emergency, and pushing for new bodies like the Scottish National Investment Bank and the Publicly Owned Energy Company to have a clear purpose to deliver a just transition and the necessary public investment to  make it happen.

We’ll keep standing with workers and communities on the frontline of the climate crisis here in Scotland and around the world. We will continue to work hand in hand with trade unions to ensure we meet our global climate goals in a way that’s fair to those currently engaged in the fossil fuel  industry, but we need the public behind us to make government move on this. With your support, we can push government to support a clean energy jobs revolution in Scotland, bringing workers and communities with us as we do our part in tackling the climate crisis.

Help us deliver green jobs for Scotland, by chipping in today: