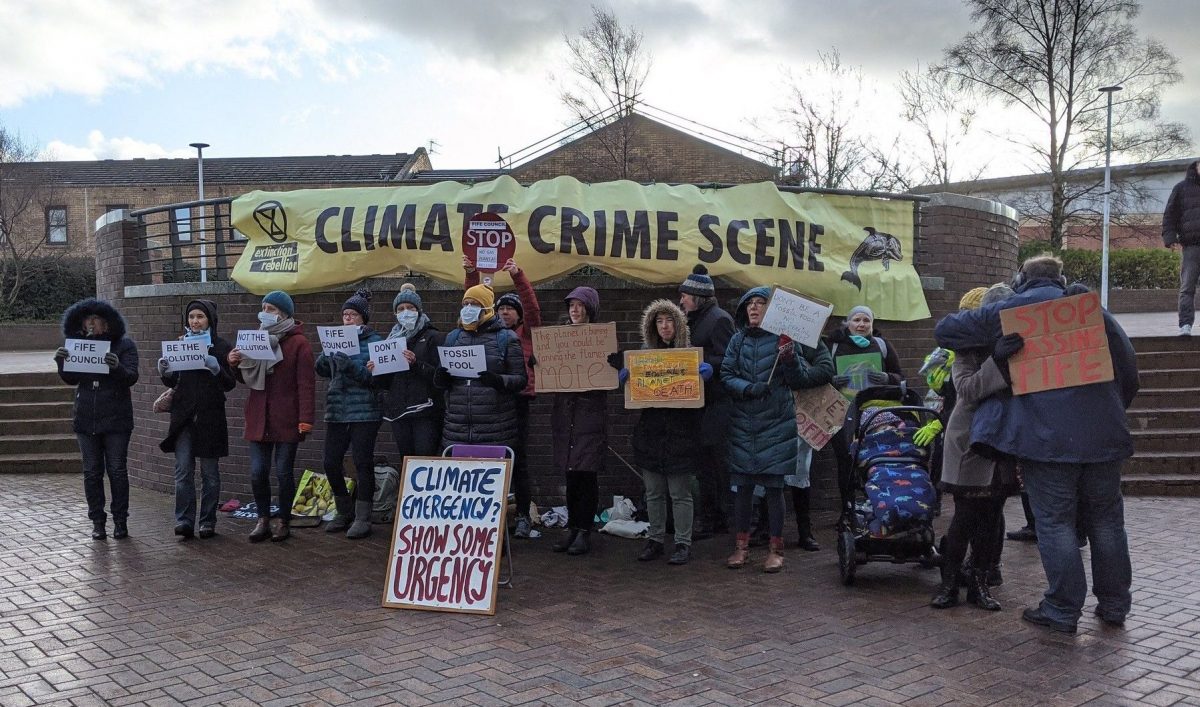 Our Activism Organiser Kate spoke to members of the Hillend Action Group to find out how they created and sustained a successful campaign to fight new fossil fuel infrastructure in their area.

Two years ago, members of a small community in Hillend, Fife, noticed that an energy company had made a planning application to build a gas power plant just down the valley and only 250m from their village.

A group formed to resist the development due to their concerns about air pollution risk to their community and the global climate emergency.

In January 2020 the application was finally rejected by Fife Council, in a massive win for the local community and the climate. Here’s a little about how they did it.

Iain from the Hillend Action Group spoke of their early motivation “the principal concern was air quality. I was really worried about the impact it would have on the air we breathe. I’ve got a young son, he’s 6 years old, he’s asthmatic and he has to take three preventative inhalers per day. I knew having spoken to others about this that the plant would produce large amounts of nitrous oxide gasses, and the impact of NOX gas are on public health are well documented, particularly on the lung development of young children.”

The group was able to find people in the community with the skills that would help them to fight off the gas power plant, including two engineers, a planning expert and a doctor. A few members were also co-opted onto the Community Council to be able to access the statutory rights of that body to help their campaign.

One member of the group, Louise reflected on her motivations for joining: “The environmental justice side was a particular concern of mine. I grew up in Fife and the area does seem to be overrepresented in terms of environmentally damaging developments. That’s why I was so glad to find a group of like minded people because a lot of communities here feel disempowered. If they tried to build this plant in bits of Edinburgh there would have been a big campaign about it. It’s about time these companies realised that Fife communities aren’t going to roll over”.

The group kept the village up to date with progress via a Facebook community page and dropped leaflets through everyone’s door. The Group also used the local pub most weeks to meet and coordinate their activities.

Their initial campaign was successful and led to the Planning Officer refusing the application, but the energy company appealed. The appeal would eventually lead to Fife Council’s first ever planning appeal hearing and become the largest planning application in Fife history –  almost 800 pages in length – as campaigners challenged the developer’s application.

As well as local people and the Community Council, the group sought out allies to help amplify and support their campaign. One member created a Twitter account and started contacting organisations and individuals through that.

They managed to get the support of Mark Ruskell, Green MSP for Fife, who came to visit the proposed site and helped the group raise awareness and build pressure by getting the story in the media.

Through social media, they also managed to get the support of other organisations like Friends of the Earth Scotland and Extinction Rebellion Fife, which helped them to grow their numbers and develop new tactics for the final appeal hearing.

The Group thought strategically and knew that the only way to defeat the gas plant was through planning policy, meaning they had to target the planning committee and other consultees that could influence them. Many of the tactics they used were more ‘inside track’ such as engaging with and influencing decision makers through official channels.

Their first tactic was research on planning and the proposed development. They found significant inconsistencies and oversights in the application which proved extremely helpful in reducing the credibility of the developer.

They submitted evidence via the Community Council (as a statutory body) and continued to do this even after the official consultation was over. They also contacted other organisations being consulted on the application, sharing what they had found during their research. This led to Scottish Environment Protection Agency (SEPA) and the NHS supporting the community and declaring the development ‘inappropriate.’

The campaigners also contacted other Fife Council officers with specific concerns, such as speaking to the teams responsible for ‘air quality’ and ‘landscaping.’ Louise thought “that was the turning point for the campaign” as many parts of the Council became aware of the concerns.

Hillend Action Group members Mark and Keiran believed that maintaining credibility and trust with the Council was an important strategic move for the group, especially as they managed to discredit the developer.

However, the group recognised it would also be helpful to build the pressure outside the Council as well.

They managed to get a lot of media coverage in the weeks leading up to the decision and successfully highlighted the hypocrisy of Fife Council declaring a Climate Emergency whilst approving new gas power plants.

They also worked with other allies, like FoES and Extinction Rebellion Fife to plan a demonstration outside Fife House (Council HQ) on the day of the decision. Iain commented on the impact of that action, saying: “people are still talking about that.. Everyone now knows that Friends of the Earth Scotland and Extinction Rebellion Scotland were at Fife House, what they haven’t quite realised yet is that it was us that made that happen. But that was a huge thing and I can’t thank you enough for your support”.

The gas power plant was being pushed though as a ‘local’ development, under green energy policy, because it was meant to top up what the grid couldn’t get from renewable energy.

“We couldn’t understand how Fife Council were applying green energy policies to a fossil fuel plant and were waving it through on those grounds. That just seemed utterly bizarre, how they could be permitting this to take place because it is supporting green energy, so we will treat it as green energy. We were all watching the news, we’re well aware of the climate emergency. Even now I don’t understand that justification” – Ian

Keiran said: “the location planning for gas peaking plants is just non-existent, they haven’t looked at them. Planning regulations as an issue needs totally reviewed”

The Scottish Government is currently developing a National Planning Framework which will determine planning policy for the next 10 years. It is crucial that we ensure this delivers for the climate and communities in Scotland, rather than allowing more dirty developments. Read the FoES response to the initial call for ideas here