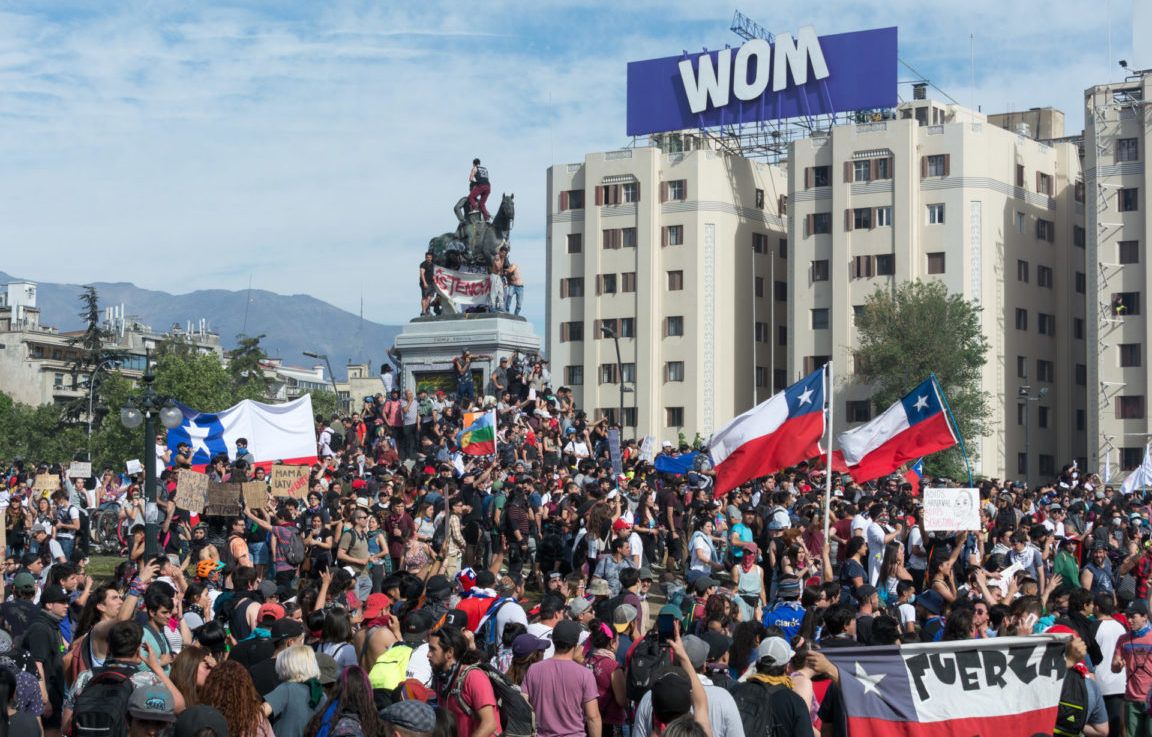 Friends of the Earth Scotland and the Friends of the Earth International federation, along with climate justice allies around the world support this statement condemning the last minute relocation of this years UN climate talks from Santiago in Chile, to Madrid, and the brutal oppression of the Chilean people.

You can help support the Peoples’ Summit in Chile – which importantly is still going ahead despite the relocation of the climate talks – by donating here.  Please add ‘People’s Summit’ to the notes box on the donation page to ensure that your donation is allocated correctly.

Watch this space for more info about our solidarity with Chile link up to COP25 and the Peoples’ Summit in Glasgow event on 1 December.

In response to the announcement by Sebastián Piñera to suspend COP25 summit in Chile, we as international civil society reaffirm our solidarity with the people of Chile who are rising against austerity and growing inequalities; we condemn the violent repression and human rights violations from the government and the military against peaceful protestors.

In the past few weeks, mass protests have taken to the streets of Chile in response to the disastrous neoliberal economic and social policies that have deepened inequalities and injustices as well environmental conflicts across the country. Although the protests were sparked by a hike in transport fares, it is clear that the discontent of the Chilean people has much deeper roots and is very much linked to the ecological emergency and the crisis of inequality.

In response to the uprising, President Piñera has unfurled a wave of violent repression, releasing the military onto the streets, installing a curfew under the now lifted state of emergency, and attacking, torturing, raping, and killing non-violent protesters. This horrific repression brings back memories of 11 September 1973, when the people’s democratically elected government was violently deposed, unleashing relentless neoliberal violence on the country ever since.

The Chilean government’s decision to withdraw Santiago as the host city of COP25 is a desperate attempt to divert the attention of the international community away from the deeply intertwined social inequalities and environmental injustices impacting communities across the country, and the violent repression of the people opposing them.

The people and the movements of Chile won’t be silenced, and we will keep on standing in solidarity with them and their demands for social, environmental, and economic justice. COP25 may leave Chile, but our attention will not. We will not allow for the relocation of the COP to Spain to allow for ever stronger state repression. We support the demands of the Chilean peoples and their organizations and movements, including the call for a constitutional assembly and for the Piñera government to withdraw troops from the streets and to stop the repression and horrendous human rights violations.

The social and political crisis unfolding in Chile cannot be isolated from the water crisis, or the broader ecological crisis. COP25 offered the opportunity to shine a critical light on the climate injustices affecting communities in Chile, where extractivist policies have created huge sacrifice zones. The country has been experiencing a historic mega-drought for the last decade as a result of the overexploitation of resources by industrial agriculture and mega-mining industries, coupled with a highly privatised water system and aggravated by an increasingly destabilised climate.

The demands of the people and the movements of Chile are intrinsically linked to the demands for climate justice, as there can be no climate justice without social and economic justice. The rebellion by diverse sectors of society against the neoliberal model in Chile is indicative of its responsibility in producing inequality, deepening climate injustice, and undermining the public good.

Neo-liberal over-exploitation of natural and mineral resources in Chile has had a particularly harsh impact on the lives and livelihoods of Indigenous Peoples, peasants, and workers, with large-scale violations of their human rights and their land and other rights. Indigenous groups have been disproportionately targeted, through draconian terrorirsm laws, for defending their communities, lands and water.

We stand in solidarity with frontline communities in Chile and everywhere. We reaffirm that climate justice means social, economic, and ecological justice. We condemn the violent repression of environmental defenders, the human rights and indigenous rights violations, and the increased crackdown on people and movements everywhere.

The decision of the UNFCCC and Spanish government to let Chile retain the COP25 Presidency while relocating the event to Madrid with just a month’s notice, carries catastrophic consequences for civil society movements across the world. This is yet one more example of the purposeful isolation of democratic, grassroots movements from the world’s most important decision-making spaces.

In such a Euro-centric context, which favours participants who have the capacity and resources to attend, we reaffirm that there can be no meaningful climate negotiations without meaningful participation from the Global South and global justice movements. We call for a shift from this current context to the facilitation of meaningful participation for Global South actors, for the centering of frontline and impacted communities’ voices, of movements demanding social, economic, and environmental justice, and for COPs to put the needs and interests of people above capital.

Specifically, we call on the UNFCCC and Spanish governments to assist those organisations from the Global South who suffered significant financial losses as a result of the venue change and now face the daunting task of applying for Schengen visas and rebooking travel and accommodation.

The Cumbre de los Pueblos and the Cumbre Social por la Acción Climática will go ahead in Santiago, and we stand in solidarity with groups facilitating these crucial spaces despite attempts from the regime to shut down Chilean movements and undermine international solidarity. Some of us will travel to Santiago, some of us will travel to Madrid, and many of us will not travel at all. Wherever we are, we will continue to demand climate justice and organise for system change.

Climate justice seeks to create ‘a world where many worlds fit’, a movement where many movements fit. In the face of increasing repression and crackdown on movements designed to divide us, we are more united than ever in the struggle for justice.

FoES stands in solidarity with the Chileans and we support the activists and organisers of the People’s Summit in Chile during COP25 in calling for climate justice. Organisers are still planning to run the summit, using it as a space to discuss and develop solutions to the underlying problems contributing to both the unrest and the climate crisis.

Please consider making a donation to support the organising of the summit, which will be a crucial space for activists in the global south to lead the conversation on what real solutions look like.

One of the organisers of the Peoples’ Summit Lucio Cuenca visited Glasgow earlier this year. Read what he had to say about the unrest in Chile and how Scottish pension fund investments are helping drive the environmental destruction in his country here