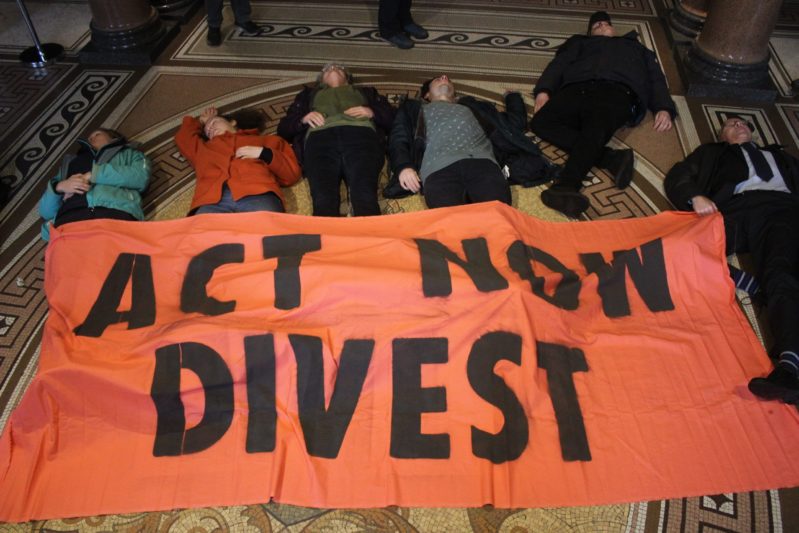 Home > Is there a Climate Emergency in Glasgow or not ?
10th March 2020 By Richard Dixon

Glasgow City Council has declared a climate emergency and will host this year’s UN climate talks but the massive pension fund it controls continues to invest its cash in fossil fuels.

Last week we published figures which showed that the Strathclyde Pension Fund, the largest public sector pension scheme in the UK, has more than £700m invested in fossil fuel companies. This despite the fact that Glasgow City Council declared a climate emergency in May last year and its own Climate Emergency Group recommended getting out of all funding of fossil fuels in a report aiming to make the city carbon neutral by 2030.

The fund provides pensions to staff at 11 councils and other bodies, and is controlled by a committee of Glasgow councillors. The total investment in oil and gas companies has not changed significantly in the last couple of years, and the fund bought an £8 million stake in BP only a few months after the declaration of a climate emergency.

The fund’s managers recommended that the fund should blithely keep investing for decades in some of the world’s biggest producers of oil and gas like Chevron, ExxonMobil and Shell.

They proposed ‘investigating’ going zero carbon by 2050. So, while the city itself could be climate emissions free by 2030, every pound of that £700m could still be profiting from the extraction and burning of more fossil fuels elsewhere in the world for another two disastrous decades.

They also said that divestment “isn’t an appropriate means to tackle any issue.” Which would presumably be a big surprise to the former apartheid regime in South Africa, which was brought down by the economic havoc of widespread divestment.

The global success of divestment

The fossil fuel divestment movement started in colleges in the US ten years ago and there is now about $12 trillion of money which has been taken out of fossil fuel companies but universities and colleges, churches, councils, pension funds and government. In the best examples the money divested from fossil fuels is being reinvested in climate solutions like renewables energy and insulating people’s homes.

Over half of the UK’s universities, including almost all in Scotland, have divested from fossil fuels, along with public sector pensions funds in a range of councils including Birmingham and Oxford. The City of New York agreed to divest at the start of 2018 and is suing big oil companies for the damage climate change is causing in the city.

Last year Ireland decided that it would withdraw all public funds from fossil fuel investments. The Welsh Parliament has committed to divesting its pension fund and over 300 MPs have pledged support for divesting their own pension fund.

After two protests by campaign groups Divest Strathclyde and Extinction Rebellion outside and inside the City Chambers, Councillors decided to delay a final decision to September while more input is sought.

Well done to the councillors who resisted spurious argument aimed at protecting business as usual. They will need to decided firmly in favour of full divestment in September if the city is to be a credible host for the climate talks only two months later.

Dr Richard Dixon is Director of Friends of the Earth Scotland. A version of this article appeared in The Scotsman on Tuesday 10 March.

Email your councillor
This site uses cookies to store information on your computer. To find out how we use them please view our Privacy Policy.Accept AllNo Thanks
Manage consent