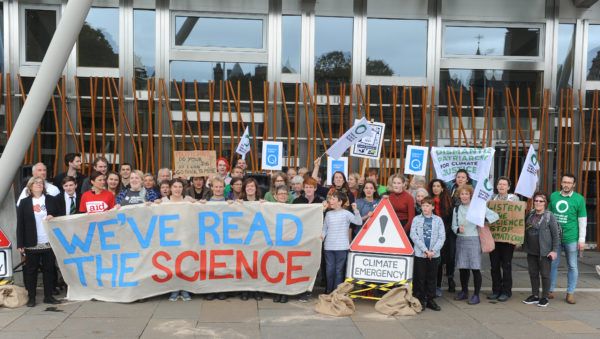 The Scottish Parliament today passed a new climate law for Scotland, with public pressure forcing the Government to accept stronger targets and commit to increasing action in the next decade.

A new climate law for Scotland was first proposed by the SNP back in their 2016 election manifesto. It soon became clear that their vision for Scotland’s new climate law was significantly weaker than ours, and nowhere near what is needed to tackle the climate crisis.

The last 12 months have been significant. Since the IPCC Special Report was published last October, the public mood on climate change has been transformed. That report spelled out the disastrous impacts of breaching 1.5ºC of temperature rises for communities around the world.

From then on, new grassroots climate groups have stormed into the media, with the youth climate strikers and Extinction Rebellion helping to push climate action right up the political agenda.

It is that pressure that has today helped opposition parties to force the Government to accept new improved targets. While it is much better that the original, the final Bill still falls short of the ambition that is needed.

So, what’s in the final law?

The law sets a target for Scotland to reach net-zero greenhouse gas emissions by 2045. We know that’s too late, but the 2030 target has always been the more important for us, because what we do in the next decade is crucial. Any long term target allows the Government to continue to kick the can down the road, and push more difficult decisions onto future generations.

When the Climate Bill was first published, the Government proposed a weak target of 66% cut in emissions by 2030. Today, all parties in Parliament voted for an amendment – lodged by Labour MSP Claudia Beamish and supported by Lib Dem MSP Liam McArthur – to cut emissions by 75% by 2030.

While this isn’t as strong as we were calling for, and while Parliament actually rejected a stronger 80% option tabled by Green MSP Mark Ruskell today, it is progress and it will mean that Government immediately have to get to work to implement new action to drive down emissions.

The Government agreed to put its own version of the principle of climate justice into the new law. It’s not as robust as we would like nor is it the version enshrined in the UN Framework Convention on Climate Change, but it is something.

One really disappointing thing about today’s vote is that the Scottish Government and the Conservatives blocked amendments that would have required Ministers to set out steps taken to ensure that policies to cut emissions in Scotland do not negatively impact on the ability of other countries to achieve their Sustainable Development Goals.

In doing so, the two biggest parliamentary parties were effectively saying ‘we don’t want to be held accountable for the way our actions detrimentally impact people in the global south’.

The new climate change legislation enshrines Just Transition principles, and requires that future Climate Plans explain the impact of proposals and policies on employment in different sectors and regions, setting out support for the workforce, communities and employers.

This is really important in ensuring that as we take steps to cut our emissions we do so in a way that protects the livelihoods of workers and communities currently dependent on high carbon industries. Ministers will also have to report on these measures each year to Parliament, which helps keep the spotlight on this issue.

However, it’s really disappointing that the Scottish Government blocked moves to put the Just Transition Commission on a statutory basis in the new law. Amendments tabled today by Claudia Beamish and Mark Ruskell were a damage limitation exercise to ensure some safeguards on this front despite the lack of a permanent body to scrutinise government plans.

From the beginning, Government fought the inclusion of any new action in this new law, but opposition parties came up with some wily ways to force Scottish Ministers to have to do new things!

The Government must now publish a new Climate Change Plan in 6 months from the Bill becoming law (which isn’t for a few weeks yet, because it has to be signed by the Queen first). That plan must set out all the action they are going to take in the next decade to deliver on the new 2030 target.

Thanks to amendments lodged by opposition parties, Government must set out in that plan what they are going to do to improve the energy efficiency of people’s homes – leaky homes are responsible for a big proportion of Scotland’s climate emissions.

We are also really pleased that the Greens’ amendment passed requiring Climate Plans to set out Ministers’ policies on oil and gas exploitation. This basically means greater and more focused scrutiny on how plans to tackle climate change are undermined by any Government support for continued fossil fuel production.

Our climate impact is not limited to greenhouse gas emissions released from within Scotland. We are also responsible for emissions from goods and services which we import from overseas (our consumption emissions).

While emissions from Scotland have been falling, emissions embedded in imported goods and services have been increasing. It is obviously unacceptable to offshore our emissions in this way, so we were pleased to see amendments being voted through which will require much better information on our impact and oblige Ministers to actually say what they are going to do about it.

Over the last 2 days, over 50 people – activists and academics, youth strikers and faith ministers and humanist speakers – read 10 hours of the IPCC report outside the Scottish Parliament.

We did this to remind politicians (and the media) of the clarity and seriousness of what the science is saying. The IPCC report calls for “rapid and far-reaching” transitions needed in land, energy, industry, buildings and transport.

We’re in the middle of a Climate Emergency and we need politicians to act like it. The public demand for action is growing and will not be stopped because this Bill has concluded.

Passing a new bill is a once in a decade milestone, but we don’t stop here. We’ll build on the good things we’ve won today as we continue to push for the rapid, transformational change we need through the coming Climate Change Plan. And we’ll continue to stand alongside activists as we grow a strong climate justice movement in the run up to next year’s UN climate conference in Glasgow.

This work is made possible because our members and people like you support it. Please consider becoming a member today.

Support our work
This site uses cookies to store information on your computer. To find out how we use them please view our Privacy Policy.Accept AllNo Thanks
Manage consent