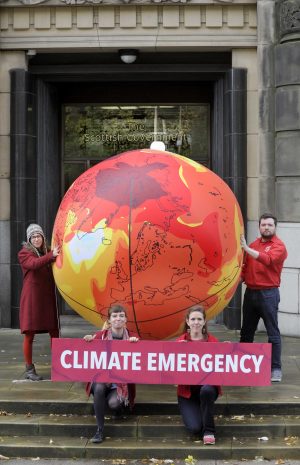 2017 is warmest year without El Niño on record

Reacting to Met Office figures showing that globally 2017 was the hottest year ever recorded without the extra warming El Niño effect and overall the third hottest year on record, after 2016 and 2015, Friends of the Earth Scotland Climate Campaigner Caroline Rance, said:

“We’re now seeing global temperature records smashed year after year, with the last three years being the warmest ever recorded. This terrifying trend brings us more unpredictable and extreme weather events, which for Scotland means more floods, storms and droughts. Globally 2017 saw an alarming number of wildfires, floods, hurricanes and droughts around the world, which had devastating consequences for millions of people.

“Scotland’s weather continues to show clear signs of the changing global climate. The wet summer of 2017 brought delays and difficult harvests for our farmers and crofters. The last few weeks have demonstrated the vulnerability of Scotland’s homes, infrastructure and economy to big storms.”

Climate stats round up (Scotland)
*2017 was the eighth warmest year ever recorded in Scotland
*8 months in 2017 warmer than the 1981-2010 average
*All ten of the warmest years have been since 1996, and nine of them since 2001
*May was the second warmest May ever
*June was the wettest June ever
*January and May were the 3rd sunniest January and May ever
*2017 had the 5th wettest summer on record

Caroline Rance continued,
“With the Scottish Government due to publish a new Climate Change Bill in the spring, we have the opportunity to play our part in tackling this climate crisis. However the current proposals lack the urgency and ambition needed. The Bill must set new targets for Scotland to make rapid climate emissions cuts in the next decade and reach net-zero emissions by 2040.”

FoES is calling for Scotland’s new Climate Change Bill to commit to net-zero emissions by 2040 https://foe.scot/campaign/climate-action/climate-bill/

Friends of the Earth Scotland is:
* Scotland’s leading environmental campaigning organisation
* An independent Scottish charity with a network of thousands of supporters and active local groups across Scotland
* Part of the largest grassroots environmental network in the world, uniting over 2 million supporters, 75 national member groups, and some 5,000 local activist groups.